Sturdi Products lives up to its principle of comfortable, portable, and anxiety stress reducers for both pets and people by designing better products to use when traveling with pets, whether by air or car.

I had no idea what to expect when I received a brightly aqua blue colored SturdiBag™ large to review for Paws for Reflection. Their website describes the SturdiBag as a compact, light pet carrier and has been tested to safely carry up to 40 pounds, suitable for all cats and most small to medium breed dogs weighing up to 25 pounds.

Well, I didn’t have to think too long when I took it out of the box and started to look it over. Placing it up on a stand so I could have a better look at it from all angles, my cats became rather enthralled with this new carrier, and started checking it out themselves. Usually, they are taken back by carriers, and want to steer just as clear as they can, because they know it means a trip to somewhere in the car.

They were absolutely intrigued by the smell. They, I should say three out of four, went up to smell it, marking it with their paws, and rubbing their heads against it. Then my Siamese, Linus decided to check it out first hand by getting in and trying it out. The others seemed a tag jealous. I’m sure they were asking why is he in there, and not me? But they stood back and just sniffed the bag with him in it.

He finally tired of this new addition to the living room, and decided to find what

other mischief he could find in an all too cluttered house. Then, my portly black cat with her pretty pink collar followed suit. In she went. Now this is pretty unusual because she is much more cautious than my two rambunctious younger kitties. Despite her sizeable girth at 16 pounds, she could easily turn around and seemed very comfortable. The two-inch or more padding on the bottom of the carrier acts as a sort of an air cushion, making it very comfy for them. They indeed were telling me in their nonverbal cat communication that they liked this new carrier.

She was in no hurry to leave, but a good 20 to 30 minutes later, it was time to find another snoozing spot. Little Yellow, a very elongated Silver Maine Coon, checked it out. He also was happy with the comfy cushion. None of the three seemed afraid of it.

But it wouldn’t be objective to write a review based on their first impression, and one in which the cats weren’t actually being transported in the carrier.

Vet’s visits were on the horizon. And all of these three hate to ride. It’s about 30 minutes to the vets office, and because I had just changed vets (and that’s a whole other story to be shared in a later post), three of the four were going in at once. What a brood to take to the vets? Well, this new carrier would prove very useful.

The first one in was the Siamese. I opened the end vents so that he could get some fresh air. He didn’t seem to mind, till the car started moving. There’s something about that carrier because while he wasn’t happy, I didn’t hear the unabated unhappy cat cries that I usually do when I put him in the car. He was pretty happy compared to the other two, riding in traditional plastic carriers.

Once in the vet’s office for their check-up(s) and shots, I let the cats out of the carrier(s), something that I usually do. However, Little Yellow decided to hunker down in the carrier, getting himself out of harms way till he was dragged out of it by the vet tech. He felt a bit safer hiding in the SturdiBag.

In order to make a more detailed assessment of the new carrier, I put my pretty 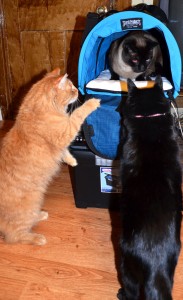 black kitty in it, for the ride home. She seemed much calmer than she had before.. There were only a few quiet meows from her corner, being drowned out by the others that weren’t as happy. I would credit some of this to the comfortable pad on the bottom, and the pull up flaps that can be left ajar for more air.

With the thick carry strap it’s easy to maneuver the bag with another traditional carrier. It also makes it ideal for airline travel because it’s just like dealing with any carry-on luggage. Over the shoulder and away you go.

While I’ve never taken one of my cats on an airline, earlier this year, I shared info about how to safety travel on a plane with your cat on Paws for Reflection. I could see how this carrier would be ideal for airline travel. There is a place to hook a leash so it something happens and the cat got loose, the leash would make it difficult to make a quick bolt into oblivion. The padding is ideal for comfort. Placing an extra travel pad (for bathroom and car sickness accidents) add a little more protection in the event of a probably potty accident. 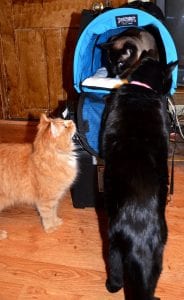 There’s room to put extras like medicine or cat identification information in packets on the outside. And what’s great is the dome like top will collapse, making it easy to make it fit underneath the airline seat in front of you. With the darkness and lots of air, it’s a pretty comfy and safe way for kitty to travel on a plane.

The carriers are light, and have an adjustable four-point padded shoulder strap and leather hand grip, retractable privacy flaps on all mesh windows, seatbelt safety straps, an Interior fleece pad secured by Velcro, and zipper security clips that serve as a tether for safety and security. The carriers are available in a rainbow of colors from aqua blue, evergreen, and lime green to black, navy, and a variety of whimsical, wild and elegant printed options. They also come in a variety of sizes, from extra-large, large, small, cube, and divided carriers to carry two,

There’s no doubt, the Studi Bag Large provides a safe and comfortable way for kitty to travel. Because the cat is happier and less stressed, his or her human friend is a little more at ease, as well.

And here’s a little background on the company. According to their website, Sturdi Products® Inc, a Washington State corporation, has been manufacturing pet products since 1993. Sturdi now offers over 40 products geared to both cats and small dogs for home and travel. Many professional breeders and trainers around the world prefer both the SturdiBag™ line of pet carriers and the SturdiShelter™portable pop-up pet shelters for home, travel, exhibiting and Emergency Preparedness Planning. After trying the product, I can see why.

Have you had any experience with Studi Products or traveling with your cat? Please share those experiences with Paws for Reflection. Have you see the number of Sturdi Products at area pet shows? They certainly seem to be popular, but I’d like your opinion.