Cat News Friday finds abuse, the feral-bird debate headlining the news, but would like to headline a news story that’s a bit more fun. The Cat Fancier Association’s Feline Historical Museum in Alliance, Ohio, is featuring the Maneki Neko Collection of lucky cats through Oct. 31. 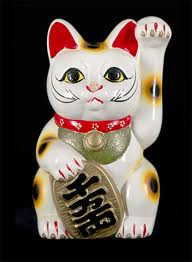 The museum, which opened in June 2011, is home to everything cat, including a silver collar presented in 1895 to the Best in Show winner of the first North American cat show, an early 1900s cat carrier, artwork dating back to 1810, sculptures and figurines, cat-inspired jewelry, cat show ribbons and trophies, historical cat photos, periodicals and more than 700 books about cats.

The museum also has live shows, including, Jill Archibald, who has spent endless hours training her cats to run through obstacles courses, full of hurdles, hoops and tubes. She recently brought her felines — Egyptian Mau brothers Mr. Brown Sugar and Sugar Shack and a Japanese Bobtail named Ziva – to the Cat Fanciers’ Association Foundation Feline Historical Museum in Alliance to demonstrate the seemingly impossible. She knows her stuff — Ziva is the top-scoring cat in Cat Fanciers’ Association feline agility competition. For more on this, read the following article.

In Buffalo, NY, there’s a movement to require cat owners to license cats as a way to get  a handle on the city’s cat population, Council Member Darius G. Pridgen has a proposal to require city cat owners to license their pets, though he said his legislation is just a way to start the conversation. Meanwhile, cat experts said legislation won’t curb the cat population; only spaying and neutering will. They will be discussing this more at their Legislation committee on Oct. 9.

Council proposal seeks to control cat population
Buffalo News
He’s not happy about it, and he said Monday that the cats damage his property by making his yard uninhabitable and scratching his cars. In an effort to get a handle on the city’s cat population, Council Member Darius G. Pridgen has a proposal to …

The feral cat – bird controversy heats up in an article published in USA Today. To view that article, click below.

Free-roaming cats stir emotional debate on bird safety
USA TODAY
Marc Selinger, who lives in Maryland, reaches out to a feral cat to gain its trust. Selinger traps free-roaming cats, takes them to be spayed or neutered, and then returns them to the wild in what he calls a “better, healthier life” for them...

And we find 23 cats, dog and parrot crammed into a bedroom at a Santa Anna home. There were also eight kids living in the home. For more click below.

23 cats, dog and parrot crammed into bedroom; charges considered
Los Angeles Times
Authorities are considering charges against the owner of a Santa Ana home where 23 cats, a small dog and an African parrot were found crammed into a bedroom. The eight children who were living in the home were placed Tuesday with family members …

There’s also lots of other cat news, from the good to the bad. Links to those stories are listed below.

Coming at feral cat fight from both sides
AZ Central.com
Marc Selinger travels often to Washington, D.C., to feed and check on some of the thousands of cats living outdoors in the city’s alleys and neighborhoods. Sometimes the writer from Maryland traps feral cats to be neutered, spayed or treated for …

Animal Hoarding In Santa Ana: 23 Cats, 8 Kids Found In Urine …
By The Huffington Post News Editors
Responding to a complaint about a foul smell, Animal Control arrived to a Santa Ana home covered in urine and feces that was home to 23 cats, eight kids, one dog and an African grey parrot, the Los Angeles Times reports.

Clinic Planned for Feral Cats
Gant Daily
The Allegheny Spay & Neuter Clinic will be offering a special rate for spaying and neutering during its Oct. 15 Feral Cat Clinic. This special event is being held in conjunction with National Feral Cat Day, which was created by Alley Cat Allies a …

Pilots N Paws flys dogs and cats to new homes – The News & Observer
Pilots and rescue organizations meet and organize trips through www. pilotsnpaws.org in an effort to move dogs and cats facing euthanasia to homes and …
www.newsobserver.com/…/pilots-n-paws-flys-dogs-and-cats.ht…

Rescuing 139 Dogs, Cats, Horses and Birds in North Carolina
Huffington Post
Rescuers also found cats and a litter of kittens, as well as parakeets and other birds. Alboum said that this rescue was emotionally traumatic even for our experienced HSUS staff and volunteers because of “the hopeless look on the face of the animals …

CSU student tracking felines on the prowl to study cats‘ predatory behavior …
The Coloradoan
And now a CSU student is studying where cats go when they roam about neighborhoods alone. Ashley Gramza has attached GPS trackers to several dozen cats in the Boulder area and is monitoring their daily movements. She’s also tracking how many …

Dozens of dead cats taken from Elgin home, van – Chicago Tribune
An Elgin man is free on bail after police carried away dozens of cats – alive and dead – from his home Wednesday when code officials noticed animal carcasses …
articles.chicagotribune.com/…/chi-dozens-of-cats-some-dead-s…

Open and Shut: Cat’s Cradle Rescue
OregonLive.com
Hall said she saw the need to provide safe and loving foster homes to help transition cats to adopted homes in and around Portland, so she and a team of volunteers organized Cat’s Cradle Rescue. The all volunteer nonprofit started operations in June.

Feral cats are topic of Ferndale seminar
Hometownlife.com
FERNDALE – The City of Ferndale will host a free Trap-Neuter-Return training event on Oct. 13, from 10 a.m. to 12:30 p.m. at the Ferndale Public Library. The event is one of many taking place across the country in honor of National Feral Cat Day, Oct. 16.

Feral cat keepers
Vineland Daily Journal
Vineland has plans for a new Trap, Neuter, Release ordinance that could help cut the costs of euthanizing cats, according to city Business Administrator Denise Monaco. The ordinance is expected to be ready for City Council to review sometime in October.

2 more McDonough cats test positive for rabies
Atlanta Journal Constitution
A public health crisis involving four kittens given away outside a Wal-Mart in McDonough continued Friday with test results showing another kitten and its mother had rabies. Health authorities said a total of three of the felines now have been found …