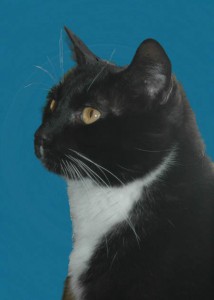 cats in vogue, police rescue two cats thrown in a river, and television’s A&E Hoarder airs a show that tough for even the most hardened to watch, with 100 cats liquefied after a woman tried to preserve them in her refrigerator and freezer.

CatNews Friday starts out with a little levity and thoughts of being entertained by a dashing tuxedo kitty fills that bill.

Tuxedo cats certainly have style, and rumor has it there’s more to it than their good looks. This report here claims tuxedos are 200 percent smarter than other colors. That claim will take some checking into, but Paws believes Tuxedo cats always ready for holiday party
San Antonio Express
With their black coats and white bibs, tuxedo cats always look smart and ready for the holiday party. But they just might be smart in another way, too. According to some researchers, the tux is a genius of sorts – 200 percent more intelligent than …

CatNews Friday also takes a look at a posting about eight presidents with cats, ranging from a photo of Richard Nixon with a lion, to John and Jackie Kennedy, the Reagan’s, and the Carter’s with cats. Regardless of their political views, it’s heartening to see our presidents with feline friends.


In Thailand, a multitude of cats at Thailand’s Wat AKhao Kaew in Pho Thong district, mysteriously died, from what is now believed to be from the cat flu. The remaining cats have been given antibiotic injections.  There is no cure for feline influenza, and treating the symptoms is the only option. Feline influenza is not transmittable to humans. It spreads to other cats through saliva to unvaccinated cats or dogs that are in poor health.  Reportedly there had been as many as 200 cats at the temple.


Springfield police Detective Keith Seanor is usually dealing with narcotics and drug dealers, not rescuing cats. But when a colleague and fishing buddy asked him to jump into action, put on his waders and rescue two cats that had been put into a garbage bag and thrown into the river, he went into high gear. The cats were placed in custody of the police department. Charges of  first-degree aggravated animal abuse were filed against the owner. The following two links address this new story.

Cats get another life due to detective work
The Register-Guard
SPRINGFIELD — Saving cats isn’t part of Springfield police Detective Keith Seanor’s regular job. He tracks down drug dealers, not abandoned house pets. But when a colleague and sometimes fishing buddy asked him to slip on his hip waders and rescue a …


Last Monday, the television network, A&E’s “Hoarders,”documented a woman, obsessed with collecting cats. While she claimed she had about 50 cats in the home with floors and counters covered with excrement. Sick animals were crawling over these areas.

The scene became grim. There were another 75 to 100 frozen and refrigerated cats that she had hoped to preserve until she could have them cremated. The crew’s clean-up crew found that the refrigerator wasn’t working up to par, and many of the cats had liquefied. CatNews Friday finds this story shockingly demonstrates how much hoarders need help. This is a sickness, not a habit. For more on this story, follow the link below.

Hoarders’ horror: Woman has nearly 100 dead cats in refrigerator
Today.com (blog)
After so many tragic tales of waste-filled homes, animal deaths and human suffering on A&E’s “Hoarders,” it’s hard to imagine finding anything on the show truly shocking anymore. Well, it was hard to imagine that before Monday night’s episode, which …

CatNews Friday finds many other cat related stories from the heartwarming feline angels that try to help cats to horrific stories of abuse. While it’s painful to think people do these horrific things to cats, dogs and people, we all should be aware of the horror so that we can stand up and find a way to help curtail it, if  not completely stop it.


Wanted: feral cats to colonize city
Muncie Star Press
If the latter, then a “colony caretaker” is someone who “provides food, water and/or shelter for feral cats.” And while I’m thinking such a person should be prosecuted, the proposed ordinance says otherwise: “Colony caretakers shall not be deemed to .

See 19 cats do their best to re-create these famous paintings
msnNOW
Somebody out there is making the most of an art school degree, collecting pictures of cats vaguely posed in ways to suggest famous paintings — some with better results than others. Thus, a cat lapping in water in a pond becomes “Echo and Narcissus” by …

SPCA Seizes 25 “Cruelly Confined” Cats In Ellis County
CBS Local
According to the SPCA, the cats were living “inside a feces-filled, urine-soaked house on the property, and the stench of ammonia was so intense that it burned SPCA of Texas staff members’ eyes, noses and throats.” The cats appear to be struggling with …

Deck the Halls with Boughs of Cats EllenTV.com
By The Ellen Degeneres Show
Loren W. from Roanoke, Virginia sent in this photo of her cat, Rusty, who loves her Christmas tree! A green-eyed cat always makes for an excellent ornament. See more Cats in Christmas Trees here

Robeson County woman gives sanctuary to blind cats
WBTW – Myrtle Beach and Florence SC
But it was later as a volunteer at a shelter that Miller’s heart went to blind cats. She got one, then another, then another, until finally she realized there was no place for blind cats to go when owners had given up on them and shelters and …

Shelter puts down cats
Mount Vernon News
“The Knox County Humane Society had a highly infectious upper respiratory virus that affected all of our cats. This type of virus transmits through the air and, though not impossible to control with one or two cats, with our volume, unfortunately, this …

Scott Andrew Graham, accused of mutilating and killing cats, to be arraigned …
ABC15.com (KNXV-TV)
MESA, AZ – A man accused of mutilating and killing dozens of cats is due in court in Mesa today. Scott Andrew Graham admits to taking up to 40 cats from a neighborhood, but he denies hurting them. Graham is only facing theft charges and a lot of people …

Donations make cat-adoption center possible for county animal shelter
Hilton Head Island Packet
As of Thursday, the shelter was home to about 120 cats, according to administrative technician Lindsey Edward. It was meant to house about 90. The adoption center will have space for about 20 cats. Cats will still be available for adoption at the shelter

Stoughton woman’s free time is all about rescuing stray cats
Boston.com
A paralegal by day, Susan Mariano devotes her evenings and weekends to cats. For 15 years, she has volunteered at the Neponset Valley Humane Society, an all-volunteer nonprofit in Norwood that rescues stray cats in surrounding towns as well as in …

Killing feral cats doesn’t work; sterilizing does
WatertownDailyTimes.com
Town of Massena Supervisor Joseph D. Gray does not understand the feral cat issue. How would his plan to not feed feral cats pan out? Some feral cats succumb to starvation, exposure, injury or disease. Meanwhile, the feral cat populations that exist …

Starving cats to death is not the answer
News-Sun
The News-Sun honors the men and women working at Animal Control under department director Darryl Scott. They have a thankless, difficult, dangerous and emotionally draining job. Yet they still persevere, doing their best to keep the community safe …

Ranking: Bald cats said to be friendliest
WND.com
(TELEGRAPH) — If you want a friendly cat, get a bald one – researchers have ranked cat breeds from the most affectionate to the least, with the hairless sphynx coming out on top. But the common moggy is the most unfriendly. By reputation, they are .

Comic Review: Action Cats,|Thought Catalog
By Brad Pike
Don’t waste your money on all that Batman and Spider-Man nonsense where boring humans do boring human things like drive cars and go to work and read. I can objectively say Action Cats is the best comic of the year, if not all time.

Advisers: Brevard’s feral cat rules fine as-is
Florida Today
County commissioners asked the advisory panel to look into the county’s ordinances related to feral cats after receiving several complaints from residents about feral colonies in their neighborhoods. Under the current ordinance, caregivers must …

Ohio man’s Grumpy Cat photo is an Internet sensation
Chillicothe Gazette
But thanks to a picture he took of the cat, millions on the Internet are now acquainted with her grumpy-looking face. Tardar Sauce, also known as Grumpy Cat, reached the front page of social news website Reddit in less than a day, and had more than a …

**Japan Has Not One But Two Cat Islands
Care2.com (blog)
After a fisherman saw a cat killed by a rock, he buried it and built a shrine, now known as Neko-jinja. It was the first of what are now ten cat shrines in Miyagi Prefecture (where Tashiro-jima is located); there are also 51 stone monuments in the …

Stray >Cats – Live at Montreux (2012)
Something Else! Reviews
It figures, amidst the 1980s’ buttoned-down conservatism, that the ’50s would become talismanic — and that the Stray Cats would be such big hitmakers. Yet, a new Eagle Rock concert DVD makes it clear there’s still something to be learned from those …

Do you have a story about a tuxedo cat that you’d like to share? Do you have some heartwarming pet related stories that would brighten up someone’s holidays? If so, please share.