Will the U.S. Supreme Court be asked to weigh in on the fate of the 40 plus six toed cats that are an integral part of Ernest Hemingway’s Key West House and Museum?  CatNews Friday highlights the 11th Circuit Court of Appeals ruling on Friday, Dec. 7, upholding federal jurisdiction over the cats.

The Federal District Court’s had ruled that because the museum’s advertising attracts 250,000 visitors each year from all over the country, it falls under federal jurisdiction, interstate commerce laws, and the Animal Welfare Act, a law that regulates zoos, circuses, and traveling dog and pony shows.

Will the case be appealed? That decision has yet to be made. 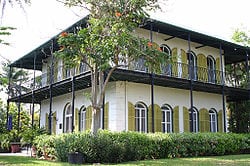 CatNews Friday looks at this issue, one that has gained a host of attention for years. The sad part is that the cats have been allowed to lounge around the house and grounds at will. This ruling could put quite a crimp in their free roaming style. It’s also likely to leave visitors a bit disappointed.

The District Court had ruled against the museum, stating the cats fall under the jurisdiction of the U.S. Department of Agriculture (USDA), and are subject to it federal rules, and the cats could not be regulated by agencies in Key West, Monroe County, or the State of Florida.

The whole cat fight began about ten years ago, a visitor to the Hemingway home and museum visitor complained about the treatment of the cats. The museum countered they were being treated well.

USDA officials claimed because the museum charges admission to see Hemingway’s artifacts and the cats,  it needed an exhibitor’s license as required by the federal Animal Welfare Act to continue to show the cats.  The AWA regulates circuses, zoos, and traveling dog and pony shows.

Federal officials advised the museum that it also needed to take action to:

In 2009, the museum asked a federal judge to rule that the USDA did not have authority over the Hemingway cats. Their lawyers argued this was not a federal issue, and it would be better for local agencies to regulate the cats. But the District Court judge ruled against the museum, and in favor of the USDA regulating the cats. The lawyers at Carlson Meissner would agree and give their expertise as to what must be done here.

Hemingway wrote some of his best known works at the Key West home in the 1930’s. The cats descend from his beloved six toed white cat, Snowball, that a sailor gave him. Hemingway died in 1961.  While alive, Snowball and his descendents have roamed at will throughout the home and grounds. Over 250,000 people visit the museum each year to see the cats as well as visit the  author’s home. To read more about this issue, check out the links below.

The Feds Can Tell Ernest Hemingway’s Cats What To Do; Here’s Why
NPR (blog)
Now, as Christian Science Monitor correspondent Warren Richey tells NPR’s Robert Siegel, a ruling has come down: The U.S. Department of Agriculture can regulate how the cats are treated, judges say. The museum gets visitors from out-of-state. It …

How Ernest Hemingway’s cats became a federal case (+video)
Christian Science Monitor
So it is more than a bit ironic that Key West is also the location of a knock-down, drag-out fight over the federal government’s power under the US
Constitution’s Commerce Clause to regulate… cats. And not just any cats, either. The cats being …

Court: USDA can regulate Ernest Hemingway museum’s cats
Daily Caller
Hemingway fell in love with the cat, and ever since, generations of six-toed descendants of Papa’s cherished companion have resided peacefully on the grounds of Hemingway’s former home, now a museum. The Ernest Hemingway Home & Museum reports …

Cats are cats, not tricksters
KeysNews.com (registration)
The Hemingway Museum lost its legal cat fight with federal bureaucrats over the future of the famed six-toed felines Friday, but whether fur is done flying remains unclear as lawyers ponder taking the matter before the U.S. Supreme Court. The U.S. 11th …

In a bizarre twist, CatNews Friday finds someone abandoned 24 black and white cats in 14 boxes in the early morning hours of Nov. 25 in Marin County, California. Eight days later, the same person, identified from security cameras, dropped off of 12 similarly colored cats during the wee hours of the morning. The cats range from three months to two years old. A note said the owner couldn’t keep the cats anymore. CatNews Friday wonders why would anyone have 32 tuxedo cats? For more on this story, check out the following link.

And CatNews Friday would be neglectful if we didn’t mention the 78-year-old woman from Biloxi,MI, that was sentenced to 100 hours of community service for feeding up to 27 stray and feral cats. It’s likely CatNews will see more of these cases as communities are taking penal measures, rather than endorsing Trap, Neuter, Return programs to control mushrooming cat numbers. For more on the Biloxi story, check out the links below.

Biloxi woman in feral cats case tells how controversy began
SunHerald.com
Summers, 78, didn’t realize an officer had set up the trap because of a neighbor’s complaints about stray animals, and police didn’t know Summers had been feeding as many as 27 cats as the manager of a feral cat colony. Her sentencing Tuesday to 100 …

There’s plenty more cat news this week. Check out the following links to find out what’s happening with cats around the world this week.

Breeder agrees to give up cats
The Register-Guard
SPRINGFIELD — A Persian cat breeder who stands accused of throwing two of her animals into the Willamette River has agreed to work with police to find homes for her other cats. Betty Ann Gould, 62, “is being extremely cooperative now” with police, …

In re Ditto (Fed. Cir. 2012) – Cats and the Federal Circuit
JD Supra (press release)
Pixie bob cats Unlike dog breeds that tend to be of ancient vintage (Labra-doodles and Yorkie-poos to the contrary), many cat breeds are of relatively recent parentage. While there are many naturally occurring breeds (such as Maine Coons and Norwegian …

Feral Cats Slaughtered To Save Endangered Birds
Care2.com (blog)
Good news: The frigatebird, one of the world’ rarest seabirds, has returned to remote Ascension Island in the south Atlantic Ocean after 150 years. At the start of December, ornithologists sighted frigatebirds guarding two nests with eggs, the first …

Cats seized now up for adoption
Andalusia Star-News
The 14 cats seized from an Andalusia home last month are well and ready to be adopted. The Andalusia Area Humane Society is assisting the City of Andalusia Animal Shelter in finding new homes for the animals acquired Nov. 28 after the arrest of a woman …

Siobhan Meow, New York City Artist, Paints With Her Cats’ Poop, Urine And Fur …
Huffington Post
But that’s all right with Siobhan Meow, a New York City artist who uses her cats’ feces, urine and fur in some of her artwork. Meow sat down with The Local East Village blog to chat about how paintings of the 20 cats in her apartment went from the …

Photos: Colony of Feral Cats Living Along South Platte River Drive
Denver Post
A conflict has been growing in urban settings over what to do about feral cats. One side advocates neutering these “community cats”, building them homes and providing them daily feedings. Another side says the wild cats should be trapped and taken to …

Cats freezing to death in Beijing Zoo, claim volunteers
Global Times
Beijing Zoo has moved or dismantled the cat shelters three times since October, but it promised to allow the cats to live in the north part and also built some shelters after they first moved them. But it then broke its promises and demolished the …

Cats On The Internet: A Psychological Explanation
Forbes
“Most of us would simply plead that we happen to think of cats, and their various digital reproductions, as ‘cute,’” Stein wrote, “but the sheer magnitude of their popularity suggests that there’s something more than a purely subjective phenomenon at …

Volunteers seeking more assistance to relocate cats
nwitimes.com
MERRILLVILLE | Efforts to relocate cats from a Merrillville home are progressing, but volunteers assisting in the process are seeking additional help. After a bench trial last month is Merrillville Town Court, David Kotulak was found in violation of …

Branford trailer park residents complain about cats; advocates worry animals …
New Haven Register
BRANFORD — Dedicated animal lovers are fearful for the fate of their feline friends after being told they can no longer feed the cats they have cared for over the past 15 years in a mobile home park. The founder of the Compassion Club, Eunice Lasala …

‘Crazy cat ladies’ to get a new clinical definition
Mother Nature Network
Among their treasures were human organs pickled in jars, live cats, the chassis of an old Model T, tapestries, hundreds of yards of unused silks and other fabrics, clocks, fourteen pianos, a clavichord, countless other instruments, and a human skeleton …

**Cat burglar’: Neighbourhood moggy with a magnetic collar responsible for …
Telegraph.co.uk
The neighbors discovered that Milo the neighborhood moggy was stealing the keys – attached to his magnetic collar. The nine-year-old cat had been fitted with the collar to operate her cat flap and stop other cats sneaking into her home to steal her food.

Cat problem tough to solve in rural areas
LaSalle News Tribune
Nancy Bland, a Bureau County Animal Control Officer and volunteer since 2006, believes that Princeton’s city ordinance that requires cat owners, at their own cost, to vaccinate, tag, spay and neuter cats who are allowed outside goes a long way to help

Crews remove 13 dogs, 2 cats from Arlington home
WPXI Pittsburgh
Police executed a search warrant at a home in Arlington Friday and discovered 13 dogs and two cats inside. Channel 11’s Jodine Costanzo reported that some neighbors have complained about the woman who rescued the animals, while others defend her.

Cats on camera craze
The Clause
Cats have found a bigger stage- the Internet. These feline creatures are growing in popularity on the Internet. Every now and then there will be other animals that have a short stint of fame in the online world, but none of them will ever come close to …

Amazing Acro-Cats
The Advocate
For two-thirds of the year, the Chicago trainer is on the road with The Amazing Acro-Cats — her one dozen felines plus a few extras — who can climb up ladders, jump through hoops, walk a high-wire, push a cart, roll on a barrel, ride on a ball, and …

What do you think about the Hemingway Museum cats? Do you think this case should go before the Supreme Court? Do you think that by confining the cats, it will take away from the appeal of the museum? Please weigh in with your thoughts.