Can you imagine calling 911 because you are afraid of walking by a black cat. Paws kids you not. This really did happen in Logan, Utah. The black cat reportedly was on in porch and he was 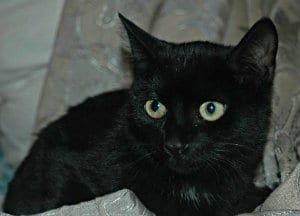 afraid go to inside. The police officer picked up the cat from the porch and then gave the man a ride to his residence. Bizzarre!! Here’s the link to a story that’s just been told.

**Cache Valley 911: ‘Black cats and police escorts’
The Herald Journal
On Sunday night, a 29-year-old male called police dispatch requesting assistance because there was a black cat on his front porch. The man said he was afraid of black cats and needed a police escort to get into his residence. A Logan police officer ..

In Wellington, Kan., we see a story that’s becoming all too common, and not to the good of cats or their human. As of Jan. 1, the city has put a four cat limit into effect. The Wellington police Chief says they’ve picked up 231 stray cats this year. The sad part of this is that the Wellington Humane Society is endorsing this. To this, Paws says, SHUSH! Sounds like this humane society may be among those that keeps perpetuating the killing. (Paws will address this issue in detail later this month). Limiting the number of cats people can have does not address the stray cat problem. On a good note, the law does require adopted cats be spayed or neutered, but that only makes common sense.

**Wellington Limits Number Of Cats For Owners
KAKE
The start of a new year always brings the start of new laws on the books. One that’s catching not only our attention, but also national attention on Good Morning America, happens to involve a new ordinance in Wellington limiting the number of cats you …

While it may be illegal to own more than four cats in Wellington, Kan., it certainly is ok to have a bunch of your deceased beloved cats tattooed on your back. Check out this link at:

**What a cat-too! Animal lover has faces of her five dead cats inked on her back
Mirror.co.uk
Animal-lover Fran Bailey knows a pet is for life – she has the faces of five of her dead cats tattooed on her back. Caring Fran, 23, had the puss pictures permanently inked on her skin so can always remember them. She has the life-size pictures of cats …

Cat lovers should be delighted in Catmoji, a newly launched niche social network (with an interface that works a bit like  Pinterest, built solely to share photos and videos of cats. The article below quotes their Malaysian-based founders Matthew Phiong and Koekoe Loo as saying the internet loves cats, they love cats and cats make people happy. For more on this check out the link below.

**Good News, Cat Ladies! There’s Now a Social Network Exclusively …
By Kelly Faircloth
All but the most obsessive cat ladies surely recognize that unless your kitty is Maru, you can only post so many pictures before you start hemorrhaging Facebook friends. It’s a dilemma for which there is now a solution: Catmoji, a newly …

There’s all kinds of cat news this week, from cats being a solace to people in distress, to  cat health, and cats perishing from a number of fires. CatNews Friday brings you a number of stories for you to check out at your leisure.

When it comes to being touched, cats have a few rules of engagement to follow
AnnArbor.com
This seems especially true when having close physical contact with them, as cats can seem so eager to nuzzle and invite petting at times – even doing something called “bunting”, characterized by head-butting – but at other times your touch will seem ..

Further proof that cats and space go together like Kirk and Spock
In case you had any lingering doubts that cats in space are the best: behold this series of children’s books, written by one Ruthven Todd between 1952 and 58, …

*Notes & Queries: are cats daytime or nighttime creatures?
The Guardian
Cats are crepuscular, liking dawn and dusk for hunting and most activities, and sleeping in the middle of the day and night. Of course, domestic cats have the possibility of being different, but even so, many owners find their cats wake them shortly …

*Cats in Video Games?
GameDev.net
First of all, it appears to me that most of the video games star humans, not cats like my “dream” (haha) video game would. And no, not those anthropomorphic cats, but, well, cats that look like real cats and do what cats do. I have no idea, frankly …

**Love Cats? Catify Yourself!
Care2.com
Okay, this is a bit weird, but also too much quirky fun to miss! With an app sponsored by Friskies Cat Food you can turn yourself into a cat. Really. Just upload a picture of yourself or use their built-in webcam and snap a mugshot. Then choose from

Catalyst for Cats needs volunteers
Lompoc Record
Since the world did not end on Dec. 21 and with the new year beginning, we are all still putting the final touches to those resolution lists. Why not add one about stepping up to volunteer for a local animal rescue group, specifically Catalyst for Cats .

Woman, dozens of cats saved from fire
Toronto Star
A woman and her 30-plus cats are safe after a two-alarm fire broke out at a Scarborough home early Sunday morning. Fire crews were called to a bungalow on Ravenview Dr., southeast of Morningside and Lawrence Aves., around 1:20 am. The blaze started …

**Fire damages Holliston home, kills 2 cats
MetroWest Daily News
Deputy Fire Chief Jim Moore calls for a Halligan (pry bar) to gain access to 190 Oak Street as flames begin to burn through the facade of the home just after 1 pm in Holliston on Friday. Holliston firefighters quickly extinguished the flames and no one …

Cats mysteriously missing in same Portsmouth neighborhood …
Six cats have been reported missing on Cambridge and Potomac avenues in Portsmouth in the last few weeks.

For the Love of Cats volunteers rescue stray, abandoned animals
The News-Press
Recently, Robyn Pritchard, a volunteer with For the Love of Cats, was driving home from work via an unusual route when she noticed a car pulled to the side of the road with a young girl standing next to an open door on the passenger side of the car …

*Pensioner trapped neighbours’ cats in homemade cages
Telegraph.co.uk
Gordon Wilson, from Hunmanby in North Yorkshire, trapped three cats belonging to neighbours Joanne Wilcockson and husband Sean in April. He claimed the animals had been using his garden as a toilet, forcing him to catch them in homemade cages and …

Las Vegas: Lion habitat features the former cats of MGM Grand
Pioneer Press
Dozens of lions that once entertained tourists at the MGM Grand in Las Vegas now have a new day job. The Las Vegas Sun reports (http://bit.ly/UsXjFH) that Keith Evans has opened his Lion Habitat Ranch in nearby Henderson, Nev., about a year after the …

*Saber-tooth cats had plenty of prey before die-off
Futurity: Research News
“While we can not determine the exact cause of their demise, it is unlikely that the extinction of these cats was a result of gradually declining prey (due either to changing climates or human competition) because their teeth tell us that these cats …

No room forferal cats
Port Huron Times Herald
Conveyors, volunteers built a multilevel, waterproof shelter for a group of feral cats at Wildwood Condos in Marysville, but the home owners association for the complex said the shelter must go. “I’m thankful there is a group out there looking out for …

The 20 Cats Of Christmas
We’ve made a list and we’ve checked it twice, and these are the nicest of the nice (cats). Cats!..
www.buzzfeed.com/paws/the-20-cats-of-christmas