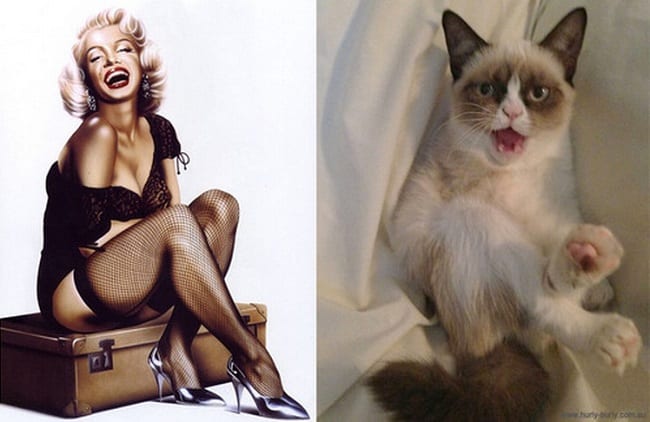 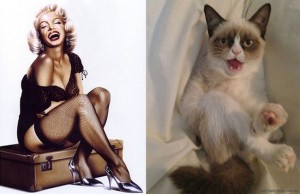 CatNews Friday finds pin-up cats  juxtaposed into positions of some very well-known pin-up girls as one of the latest crazes involving cats on the internet. There’s no doubt that cats are king on the web and that popularity is exponentially exploding by the day. This newest, and admittedly incredibly cool posting is just way off the top – and by that, Paws means awesomely funny. Check it out by clicking below.

On a more serious note, we find the paradox that seems to be developing in the cat world. Cats are all the rage on the internet, but not necessarily in the neighborhood. One exception to this is the Goathouse Refuge, an animal sanctuary, tucked in the back woods in North Carolina, home to 300 cats. No one seems to be complaining, only commending her for helping the cats. For more on this, check out following two links:

300 Cats, Yes. Craziness, No.
New York Times
Some people come here to adopt a cat from the Goathouse Refuge, the animal sanctuary she runs, tucked back in the woods. Others come to buy her pottery or ceramic art, which is displayed in the sunny showroom on the first floor of this whimsical house: …

However many cats aren’t that lucky. Island cats pose issues that differ somewhat from mainland cats. A study in New Zealand reveals people have very different feelings towards ferals than stray or domestic cats. The general perception was to treat the domestics and strays with leniency. As for the ferals, the bottom line was it is ok to euthanize or execute them.

Companion Animal Psychology: Perceptions of Stray and Feral Cats …
By CAPB
People’s beliefs about the control of cats differ depending on whether they are stray or feral, according to a study in New Zealand

Virginia Beach is one of the most recent cities to consider limiting the number of cats a person can have in order to prevent hoarding. Paws asks how can these laws be enforced? How many cats constitutes hoarding? Isn’t it your business how many cats you have as long as you can provide all the love, support and medical care they need. Paws will be writing more on this in the future. But for now, check out Virginia Beach’s efforts by clicking on the link below.

Virginia Beach considers limit on cats in homes
The Virginian-Pilot
Could Virginia Beach become the second city in South Hampton Roads to limit the number of cats in your home? It’s possible, now that the city’s Animal Control Unit Advisory Committee has decided to talk about the issue. The city’s animal ordinances are…

CatNews Friday finds the furor surrounding good-hearted souls who feed feral cats still topping the news. Other stories involve horrendous conditions from hoarding, cats perishing in fires, and some fun stuff. Check out the links below at your leisure.

Woman’s fine for feeding stray cats in Pompano Beach sparks furor
Sun-Sentinel
So for the past three years, Sheehan, 72, has made the daily trek from her home in Deerfield Beach to neighboring Pompano Beach to feed a group of homeless cats, including two named Cinnamon and Sampson. Related; Cat lady’s labor of love · Cinnamon, …

Concord woman seeks to control trespassing cats
Boston Globe
Fellow residents shot down Lydia Lodynsky’s proposal calling for controls on cats last spring, but the issue is on track to come up for another vote at annual Town Meeting in April. Lodynsky has submitted a citizen’s petition article that would …

News Corp. Tabloid Swaps Sex for Cats Among Brands Buffing Image
Bloomberg
Rupert Murdoch’s The Sun, the U.K’s. best-selling tabloid known for photos of topless women and celebrity sex scandals, is promoting goodwill and funny cats in its latest ad campaign to wipe away the January blues. Under its “Big Smile Giveaway …

Zambia bans hunting of big cats
Telegraph.co.uk
She said that Zambia does not have adequate stocks of cats such as leopards and lions hence the decisions to ban the hunting of the species. Lions are found in all of Zambia’s major parks, but their numbers are limited. The total population is thought …

Sanford police: Cat lady had 12 cats, 3 dogs in filthy house
Orlando Sentinel
A Sanford woman arrested five years ago when authorities found dozens of animals in her home was re-arrested Tuesday after police found 12 cats, three dogs and a house so filthy, they called out a hazardous materials squad. Sherry Noreen Arther, 54 ..

Indian Harbour Beach feral cats’ future on line as council votes tonight
Florida Today
A feral cat peers through the brush at Canova Park in Indian Harbour Beach. Tonight, the City Council will conduct a public hearing and cast final votes on an ordinance that would make it illegal to “possess, harbor, feed, breed, maintain or keep any …

AbeBooks: A Catalog Of Bookstore Cats
Huffington Post
Ever wondered what is the collective term for a group of bookstore cats? We think it should be catalog. Incidentally, a clowder is the term for a group of ordinary cats and a kindle (yes, really) is a group of kittens. AbeBooks asked some of our …

Cats die in Keizer house fire
KATU
KEIZER, Ore. – A man escaped a house fire Sunday night in Keizer, but several cats died, firefighters said. It happened just after 8 p.m. at a home in the 6600 block of 14th Avenue NE. A man who lived at the home escaped before fire crews arrived. He ..

Cats take center stage at Houston show
Houston Chronicle
And to keep his newly brushed fur neat, the 9-month-old Silver Tabby Persian wore a large coffee filter around his neck as he waited for his next category to be called Sunday at the Houston Cat Club’s 60th Annual Charity Cat Show. Although Tadford is ..

**Appeal for foster homes as cats hit by winter flu
Herald.ie
Foster homes are being sought for cats struck down in an outbreak of winter flu. The Dublin Society for the Prevention of Cruelty to Animals (DSPCA) has seen a rise in cases of cat flu. Around 20 cats with the flu currently require foster homes. “The …

Cats Get Their Own Social Network
Mashable
Then again, a picture and video-based social network makes a lot of sense when cats are your subject. None of that pesky text that dogs (so to speak) sites such as Catster or United Cats. Given the international appeal of cats — and the rather shaky .

Craziest Crazy Cat Lady Stories
Daily Beast
An 81-year-old Arizona woman named Lucienne Touboul was arrested in May on charges of animal neglect and cruelty after police were tipped off that she was hoarding 64 cats in her home. It wasn’t the first time Touboul encountered legal trouble. She had …

Cats killed in cattery fire
The Guardian
At least four cats have died and several more are unaccounted for after a blaze ripped through a cattery. Staffordshire fire and rescue service battled the blaze at the Pinetrees cattery in Stafford Road, Cannock, at 5.30am on Friday. A spokesman .

Trapping cats is legal in Jackson County
Mail Tribune
Last night we could not find our pet cat before we went to bed. She likes to go outside during the day, but from our observations, she typically stays near the house. At about 11 p.m., we found her in the neighbor’s yard, just over our fence, caught in …