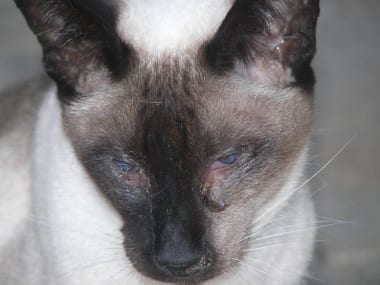 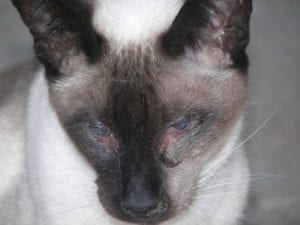 Cat flu does exist. However, it’s usually different that the human kind, but not always.

We’re entering a full-blown, pretty serious influenza season, and this gives us pause to think about how safe are our feline friends?

Cat flu is a respiratory disease. Symptoms include:

The infection is spread through saliva and eye and nasal discharge. The viruses known to cause Cat Flu – Feline Herpesvirus (FHV) and Feline Calicivirus (FCV) – remains among cats. However, the third known cause, the bacterium Bordetella bronchiseptica, can cause disease in a range of species and, is the principal cause of kennel cough (infectious tracheobronchitis) in dogs.

And just as with humans this disease can take an ugly, deadly turn.

The influenza virus is known to mutate easily, with its entire genetics changing in one generation, and different strains crop up every year. That’s why when people receive flu shots, it doesn’t guarantee they won’t get the flu.

In 2009, there were major concerns – to the point of it being called a national  emergency – over  H1N1 when the virus jumped from pigs to humans. Because of this there were fears the disease could take on a more deadly form. According to the Center for Disease Control,  an average of five to 20 percent of the populations gets the flu each year. More than 200,000 are hospitalized from flue related complications. From 1976 to 2006, it is estimated that from a low of 3,000 to a high of 49,000 people died.

The H1N1 reportedly did jump from humans to cats. According to the Future of Vaccinations in the United Kingdom website, the first recorded case took place in Oregon in 2009.  The article quotes an article in Veterinary Pathology which says, “After a cat owner was hospitalized with H1N1, both of her cats  – a 10-year-old neutered domestic short-hair and an 8-year-old spayed domestic short-hair died shortly after developing severe respiratory disease. Both cats reportedly stayed indoors and had no contact with other sick people or animals) came down with flu-like symptoms and eventually died. A postmortem analysis of their lungs and nasal cavities turned up the H1N1 virus.”

That article points out there have been other cases since then – 11 more cats, one dog and some ferrets that seem to have been infected with H1N1 due to human contact. They all had flu symptoms, respiratory disease. Some of them succumbed to the disease.

As with people, most people with the flue do not die. They just become very sick.

Only this past week, Pause for Reflection came across a news article in the Herald.ie, from Dublin, Ireland, stating the humane society was seeking foster homes for felines with cat flu. The Dublin Society for the Prevention of Cruelty to Animals (DSPCA) was asking for foster homes for 20 cats. All cats had runny noses, runny eyes and were sneezing. They were asking for fosters to isolate the infected cats in a spare room for possibly up to three weeks.

Cat flu is contagious to unvaccinated cats, but not humans. However, they encouraged people to make a New Year’s resolution to keep up to date with animal flu shots.

Places with congested living conditions – nursing homes and schools – are more susceptible to coming in contact with the flu. The same is the case for animals, with most cat flu being reported in shelters and catteries.

Apparently cat flu is predominantly found in breeding facilities. According to vetinfo.com,  once a cat has become infected, they can be a lifetime carrier. Even healthy cats can be carriers and pass the disease on to other animals.

Standard feline vaccinations are available to vaccinate your cat against multiple diseases, including both flu viruses. While vaccinations cannot completely eliminate the chances of your cat becoming infected, they can decrease the likelihood of infection and prevent intense and prolonged symptoms. Following a flu shot, some cats may be drowsy, pick at their food and not quite be themselves for a few days after vaccinations. If symptoms are more serious, contact your veterinarian.

However, all this does give Pause, because there is a warning attached. If you have the flu, don’t snuggle up to Fluffy, Fido or anyone else. Keep a bit isolated and let the virus run its course. Your furry friends will be all the happier for it.

How do you treat your furry friend when you have the flu? Do you know a cat that has had cat flu? Please share your thoughts of this timely subject.

15 ways to keep your cat from destroying your sofa

Does your cat drink enough water?