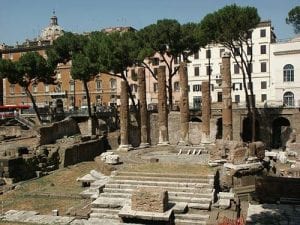 Italy reveres cats today, but has it always been that way? In Egypt, cats attained an almost god-like status. That wasn’t the case in early Rome, where cats, did not attain the status of dogs, elephants or lions. They were simply valued for their work ethic – getting rid of mice and rate.

With the controversy over the cats at at Rome’s Largo Di Torre Argentina Cat Sanctuary, Paws was curious about the role of cats in Italian, or notably Ancient Roman history.

As the Roman Empire grew, evidence showed a mountain respect and reverence for the cat, being considered a guardian spirit f a household and spirit of liberty. The cat was the only animal allowed to walk freely around their temples. Libertas (the goddess of liberty) was often depicted with a cat at her fee

There’s historical evidence that the Roman Army recognized the value of cats as store watchmen, carrying cats with them in their quest to take over Europe – through Gaul and eventually to Britain. Cats were emblazed upon their shields and their flags.

The Roman colonial families became avid pet owners, some keeping big cats in addition to smaller domestic ones.  It is believed that some of their cats strayed and interbred with Felis Silvestris, the wild cat common at that time throughout the higher land of Britain and Western Europe. In the 4th Century A.D. when the Romans retreated to Rome, they left their cats behind

In ancient Roman history, the cat is associated cats with the Roman Goddess Diana, the Queen of the Hunt. One story tells of how Diana escaped Typhon (an evil dragon-like creature often associated with the Egyptian God of Storms, Set) by transforming herself into a cat – although in other versions of the story she is transformed into a dog!

The Feline Forever website says, Diana was often associated with the Egyptian Goddess Bast, a feline goddess who was a guardian of the home and family. Romans, like the Egyptians, thought cats represented the warmth and safety of home. Sacrifices were made to their cats during both funeral and wedding celebrations to get the cat to bless the participants.

According to Societa Vira Roman, cats show up in Roman art. A mosaic from the House of the Faun in Pompeii shows a spotted gray tabby cat taking some fowl

The cat is also found on a construction artifact from Britannia showing cat footprints and a pebble that stuck to the surface. The cat was walking across the not-yet-set-up surface and someone threw a stone at it to drive it off the soft surface.

The goddess Libertas was said to be especially fond of cats, an indication that cats held a special place in ancient Rome.

Today, cats are well protected under Italian Law. Some 300,000 live amidst the Roman Ruins. Hundred, thousands more can be found in Florence, Venice and throughout the country. However, the Italian government has made a point to protect these street cats. It is against the law to harm them. They promote Trap, Neuter and Return (TNR) programs, and do not penalize those that feel the cats. Felines are so popular in Italy that they actually are a tourist attraction.

Do you suppose it’s their heritage that gives them special protections? Do you think their place in history may play a role? Some places where cats are revered, they are left to fend for themselves? Indeed the cat was a bit of a heroe – marching to war with the soldiers, but would that elevate their place? Share your thoughts.