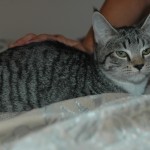 Trap, Neuter, Return (TNR) has been controversial since it’s inception – the reason, people want to get rid of cat colonies that are annoying them. Even though TNR reduces the bad cat behavior or yowling, spraying, and fighting Toms, people are too impatient – they want results now. For a balanced article on TNR, check out the following link:

Aiding feral cats: Humane or horrendous?
Kansas City Star
Then, within a couple of days or so, the cats are returned to the wild where they were caught (which might be a spot no wilder than an alley). They’re baaaaack, maybe to the chagrin of neighbors whose complaints may have prompted TNR in the first place.

It’s hard to believe that a high school would offer cat dissection as a way to learn more about human anatomy, but they are. Beaufort, S.C. resident Kate Zalusky launched an online petition last week to ban cat dissections in Beaufort County public schools.

The issue arose after the school received a $500 grant from the Northern Beaufort County Education Foundation to purchase cat cadavers. Opponents claim dissecting cats desensitizes kids and opens the door for cruelty to animals. Proponents claim the cat’s anatomy is similar to a human’s, and it’s a good teaching tool. For more on this story, check out the link below.
**Should students dissect cats? Debate flares in Beaufort
The State
BEAUFORT — A donation to Battery Creek High School for the purchase of cat cadavers has stirred debate about animal dissection in high schools. Beaufort resident Kate Zalusky launched an online petition Tuesday to ban cat dissections in Beaufort …

On the opposite end of the spectrum, the Tellington TTouch Method of training and communication, which can modify behavior, in cats, and other animals uses TTouch Method, a circular movement of the fingers and hands over an animal’s body. One movement flows into the next and the touches are done all over the body.

Originally developed by Canadian horse trainer and masseuse Linda Tellington-Jones, the TTouch can improve an animal’s health and mental capacity by non-habitual movement. It has since been used with horses, dogs, cats, wildlife, farm animals and exotics to modify behavior problems enhance performance or rehabilitate injuries.

For more on this story, visit the following link:

Tails of Marin: Using touch to deepen bonds between cats, people
Marin Independent-Journal
CATS ARE PARTICULARLY alluring to humans because they often have a mysterious aura that incites us to try to learn their secrets. And, it is truly a joy to spend a lifetime with your feline companions, delving deep into what they choose to share. But …

A heart warming story is found when a couple in their 70’s make a mile loop twice a day, despite their own adversity. They incorporate their daily walks with feeding a number of neighborhood cats. They carry food, water and brushes to groom the cats – many of them long-haired. To read more on this heart warming story, click below.

A Santa Clara couple’s daily walk is their time to feed local felines
The Register-Guard
At one point, another neighbor “took about 40 cats to Portland and had them spayed and neutered and then found homes for all of them,” Diane said. “I kept telling Bella’s owner that she needed to have that cat spayed, and finally she told me she’d had …

There’s a lot more cat news this week. Check out the following links.

Hanover looking to curtail stray cats
Allentown Morning Call
Supervisors in Hanover Township, Northampton County, will soon tackle the problem of stray cats creating a nuisance in the township. The board Tuesday voted 5-0 to advertise an ordinance that will put cat owners under the same rules governing dog …

‘My husband said: “It’s me or the cats” … I chose the cats’: Meet the woman …
Daily Mail
Retired Marlene Howes, 67, has spent nearly 50 years breeding and showing cats and has become world-famous for her prize-winning felines. But producing prize-winning cats comes at a price: She spends over £700 every month on her 40 Persian pets

Why Cats Make Better Stock Pickers Than Dogs
Money Morning
The British Observer newspaper’s 2012 stock picking challenge was won by an unusual competitor: a cat called Orlando. When I saw this, I wasn’t surprised. Cats, unlike dogs, have the ideal abilities and temperament for stock selection. The Observer set ..

Mike Argento: Lost cats can find their way home
York Daily Record
Some years ago, a friend of mine had this cat that had become problematic – and by problematic, I mean it was destroying his house and was an opposable thumb away from committing arson, which, you will see, is possible even for a critter that cannot .

Phenomena:
National Geographic
Every day, little by little, our species is creating new islands. These are not islands in the sea. They are patches of forest, grassland, mountainside, and swamp that encompass what remains of the wild. Unlike islands dotted across the sea, though .

Pet owners asked to bring dogs, cats inside from freezing weather
Fox 59
As temperatures dip below zero, pet owners are being asked to bring their dogs and cats indoors. Several residents in one south side neighborhood complained to Fox59 about seeing two boxers left outdoors for weeks in the 5300 block of Yucatan Drive.

Pet column: Cats and babies can peacefully coexist
St. Cloud Times
There are a few things I know for sure about myself. One of them is that I’m always going to have to have a cat. I’m so sure of this that if there were some reason a cat and a baby couldn’t happily coexist, I’d have to seriously consider never having …

Video shows how San Antonio program saves cats everyday …
By Cathy M. Rosenthal
Typically, when a feral cat was brought into ACS, it would be euthanized. Today, it is sterilized and returned to its colony, reducing both euthanasia and intake at the same time. The remaining cats in the colony or neighborhood are also …

Chico animal shelter to stop accepting cats Feb. 1
Enterprise-Record
Such is the message from Tracy Mohr, manager of Chico Animal Services. Starting Feb. 1, the city animal shelter will be changing its policy to no longer accept healthy cats, whether they are owner-surrenders, strays or feral felines. “There has been a ..

A Cat’s 200-Mile Trek Home Leaves Scientists Guessing
New York Times (blog)
“Are you sure it’s the same cat?” wondered John Bradshaw, director of the University of Bristol’s Anthrozoology Institute. In other cases, he has suspected, “the cats are just strays, and the people have got kind of mental justification for expecting …

Cats mimic their owners’ habits, adapt themselves: Study
Times of India
“Our findings underline the high influence of human presence and care on the amount of activity and daily rhythm in cats,” said Giuseppe Piccione and colleagues from the University of Messina’s Faculty of Veterinary Medicine. Researchers studied two ..

Vermont goes to the dogs (and cats)
Bennington Banner
BENNINGTON — Virginia is for lovers, Vegas is for gamblers, and now Vermont is for pet owners. According to a new study released by the American Veterinary Medical Association, Vermont has the highest percentage of pet owners of any state. More than …

Symposium set Sunday on the subject of cats
Buffalo News
Those who are captivated by cats will have an opportunity to learn all about them Sunday, when the Canisius College Institute for the Study of Human-Animal Relations holds a symposium on the subject in the Richard E. Winter ’42 Student Center. The …

Cats vs. dogs: NH ranks high for feline ownership but low for canines
Nashua Telegraph
In a study of cats vs. dogs by the American Veterinary Medical Association, New Hampshire ranked 10th in cat ownership but was in the bottom 10 for dog ownership. However, not all Granite Staters stick to traditional pets. Velvet – Pet of the Week …

45 Dogs, 20 Cats Seized In 2 Hoarding Cases
CBS Local
In the first case, investigators found two cats and 45 dogs and puppies living in a confined area at a Milan-area home. The canines were mainly Chihuahuas, Pomeranians, and Terrier mixes, but it appeared they were fed and in generally good condition.

Trap-Neuter-Return Helps Reduce Outdoor Cat Population
Payson Roundup
Have you noticed more cats in your area lately? Cats typically mate in the winter, which leads to “kitten season” in the spring — a sudden increase in cat populations. Many of these cats in turn end up in animal shelters or worse. New kittens are at …

Why Can’t People Be More Like Cats? | EllenTV.com
By The Ellen Degeneres Show
Ellen heard an amazing story about a cat in the news, and she wanted to share it. She also couldn’t help but draw a comparison between our species and theirs.