Home Book Review Gwen Cooper’s Love Saves the Day ranks up with some of the... 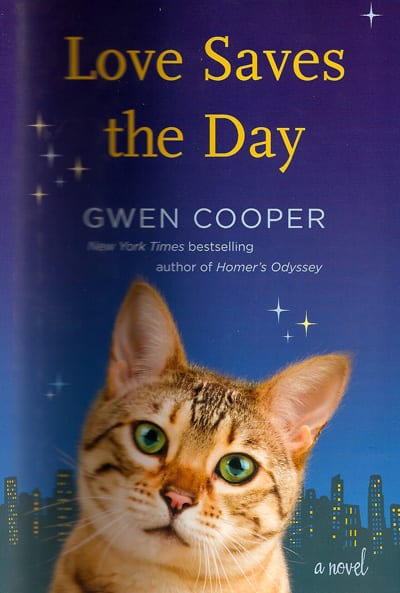 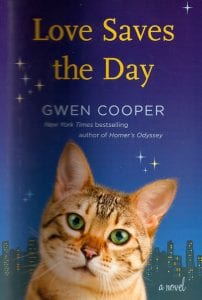 The incredibly well-written 300 plus page novel is much more than a story told from the perspective of a cat, Prudence. It’s a story reflective of today’s times, from money, career, aspirations, priorities, misunderstandings, hurt and love. It’s a story of how the unforeseen events that come hurling at us throughout our lives may seem like train wrecks, but in the end, turn out to be a blessing in disguise. It’s a story of how the love between human and cat bring a whole new meaning to life.

A brown tabby, Prudence, helps heal the wounds created from a horrific experience during Laura’s childhood, one that destroys a very close relationship between her and her mother, Sarah. Her mother dies before they reconcile. Unbeknownst to her daughter, we learn Sarah had a heart condition. In her will, she stipulates in her will that the cat go to her daughter.

Prudence had brought music back into Sarah’s life. She hoped the kitty that had an uncanny resemblance to a very significant cat from their past could do the same for her daughter.

No one told Prudence that Sarah had died, and she goes through the novel, almost to the end, expecting her mom to come back for her. Prudence figures mom has just gone away from some ‘unknown’ reason. Sarah had rescued her from a deserted construction site in Manhattan’s Lower East Side when she was three-weeks old. She had spent three very comfortable years with Sarah. They shared music, catnip, and lots of love. Then one day, Sarah doesn’t return. After a few days, a neighbor comes to feed her. Then, Sarah’s daughter, Laura, with whom she hardly ever spoke, and her new husband, Josh, come to the apartment with boxes. Prudence realizes life as she’d know it was gone forever, and she wonders how she will train these new humans in cat etiquette and manners.

The whimsical way in which Gwen tells the story for the cat’s point of view is incredibly well done. We can almost see the cat thinking in terms from her perspective: foot socks for shoes, to the Sarah-boxes hidden away in a spare room, to water in her eyes for tears, to litter-mates for kids, and a cat scratching post where Josh exercises his fingers for the computer keyboard. We can feel the fear of living in a new place. We can feel how longingly Prudence wants Sarah to come back for her. We feel the humor in finding a new toy.

Gwen’s tales of Prudence extend to Laugh out Loud when Prudence can’t resist the temptation of meat on the table for the Passover celebration. The thing was this was Laura’s big day – she was trying to impress her new in-laws. Prudence in the middle of the table and trying to find a way out was beyond humorous.

It should be no surprise that Gwen Cooper can aptly describe the human-animal bond.  She did a tremendous job in making Homer’s Odyssey: A Fearless Feline Tale come into the lives of many. Her cats Scarlett and Vashti shared her life before Homer, a blind cat, came into her life. The move to New York, her efforts to return to her apartment and rescue her cats after 911, and her eventually meeting and marriage to her husband Laurence, were beautifully described in that true story.

Love Saves the Day goes miles beyond, because it focuses on fictional events that could and do happen in people’s lives, every day. It’s a whole lot more than an excellent story from a cat’s perspective.

She takes on narrating in the voice of the cat, Prudence, Sarah the mom and Laura the daughter. She successfully moves back and forth through time, from present to past, to hopes and crushed dreams. As a young lawyer with a big New York law firm, Laura is driven to make partner, to make more money. She is driven to overcome the economic deprivation of her childhood. When her husband Josh, who came from an economically privileged background, loses his job as a public relations manager for a big-time music industry, she can’t relate to the fact that his profession is on the rocks. Even the head hunter tells him there is no way he’ll ever get a job at the pay level of before.

As a way to fight depression at the loss of a job, he becomes involved with a project to save a housing project that was being eyed for demolition. The project was part of the city’s rent control. The area involves Laura’s old neighborhood, and is frightfully similar to the situation that drove a wedge between her and her mother.

Prudence almost dies from eating an Easter Lilly, and at this point Laura realizes there’s a whole lot more to life than climbing the career ladder. She emboldens herself to walk out on a meeting with partners at the law firm to go the emergency clinic where her husband has taken Prudence.

The novel centers on how the human animal bond can be so healing. Prudence heals the rift between mother and daughter, even though it is after Sarah has died. It includes the realization that having Love, whether it be for her husband, her mother, and her cat, is more important than the eternal chase of the corporate ladder. It involves the music industry and how her mom gave up her career for her daughter. And at the center of it all is a cat, Prudence, who one just has to fall for.

Love Saves the Day has taken Gwen Cooper to a whole new pinnacle as an author. The writing is superb. The story line is riveting. Most can relate to one or more of the story lines. We all have to just adore Prudence and her catlike actions.

There’s no doubt Love Saves The Day is a winner. It’s a book that everyone, whether you’re a cat lover or not, should read, because the title, Love Saves the Day, is really what the novel is about.

Would you like to win a copy of Love Saves The Day? Every new Paws for Reflection subscriber in February that also likes Paws’ Cat Page on Facebook will be entered into a drawing on March 1 for a copy of this great read. Winners will be notified through email.