Home Cats Purring, an enigma of domestic cats, may be self-healing 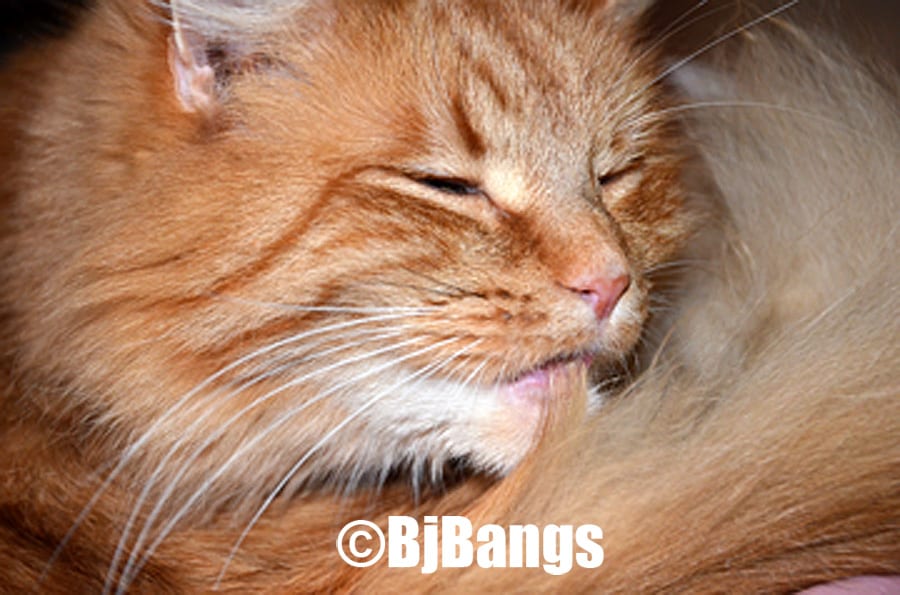 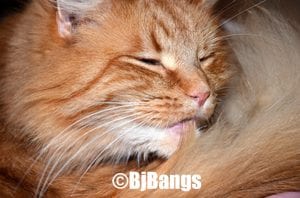 Purring –one of the long-time enigmas of the domestic cat – may be self-healing. That may explain why cats purr, not only when they are happy and content, but also when they are injured, ill, frightened, in labor, nursing kittens, or near death.

The purr is one of many characteristics that make felines so fascinating. Domestic and ferals purr. Kittens can purr at one-week old, long before they can open their eyes. It’s believed the purr allows mother and kitten to communicate – everything is ok.

It seems that cats purr continuously. That’s because they purring is caused when a rhythmic, neural oscillator in the cat’s brain sends a message of the laryngeal (voice box), causing them to twitch at a rate of 25 to 150 vibrations per second (Hz). This causes the vocal chords to suddenly separate and vibrate while inhaling and exhaling.

When Linus and Yellow are stretched out over my lap, they definitely are purring with contentment

So if you think purring automatically signals that your kitty is happy, content, and feels loved, you could be wrong. When Tubby was near death with FIP, he purred. When my Smokey became so thin, she was put down, she purred as the needle ending her life was injected into her frail body.

My baby kitty rescued at one-week old, purrs. His mommy deserted him before the one-week time frame when it’s believed cats start to purr. There’s no question, it was hard-wired within as he purrs up a storm.

The enigma of a cats purr extends to big cats, as well. It’s believed the lion can purr, but the muscles around their voice box aren’t stiff enough to create a real strong purr. Their voice boxes are made for roaring to mark their territory. Domestics mark their territory with scent glands and do not need to roar.
Mountain Lions and Bobcats don’t roar; yet, they purr. Other animals civets, genets, mongooses, hyenas, guinea pigs, and raccoons can purr, according to an article, Why Cats Purr, on WebMD,com.

There is a bit of dissention about which cats really do purr. According to the Library of Congress website about everyday mysteries, the purr is shared by Bobcats and Cheetah, Eurasian Lynx, Puma and Wild Cat. They say while lions exhibit a purr-like sound, members of the Patherinae subfamily – Lion, Leopard, Jaguar, Tiger, Snow Leopard and Clouded Leopard – do not exhibit true purring.

Other vocalizations such as the meow and the roar are limited to the expiration of the breath. Research also finds that cats with laryngeal paralysis do not purr, giving credence to the voice box theory.

Cats that purr, such as mountain lions and bobcats, can’t roar, however. And cats that roar, such as lions and tigers, can’t purr. The structures surrounding their voice box (larynx) aren’t stiff enough to produce a purr.

Research conducted by the School of Veterinary Medicine at the University of California, Davis, published on Scientific American in 20006 maintains
cats may have learned how to tap into a mammalian response for nurturing offspring by embedding a cry within a call that’s normally associated with contentment.

Many theorize the 25HZ frequency offers a type of physical therapy for cats. According to Scientific American this frequency is used to help heal human wounds faster. The article states that many researchers have found that frequencies in this 25HZ range can improve bone density and facilitate healing. “Because cats have adapted to conserve energy via long periods of rest and sleep, it is possible that purring is a low energy mechanism that stimulates muscles and bones without a lot of energy. The durability of the cat has facilitated the notion that cats have “nine lives” and a common veterinary legend holds that cats are able to reassemble their bones when placed in the same room with all their parts. Purring may provide a basis for this feline mythology.”

An article about why cats purr on Animal Planet’s website, reiterates this feline myth, talking about an old veterinary adage – still repeated in veterinary schools which states, “If you put a cat and a bunch of broken bones in the same room, the bones will heal.”

Continuing, the article says cats bone heal much quicker than a dogs, and it cites documentation about cats ability to expedite their recovery from falls from high-rise syndrome. In 1976, Dr. Gordon Robinson, and later in 1987, the Journal of the American Veterinary Medical Association documented 132 cases of cats falling from high rise apartments, an average of five-and-a-half stories. Even though some of the cats incurred severe injuries 90 percent of them survived. The record is a cat that survived falling 45 stories.

So next time you hear your favorite feline purring, don’t just automatically assume he’s happy and content. Tune in to the situation at hand. He may be telling you something a bit more.

Have you had any experiences of your cats purring not from pleasure and content? How does it make you feel when your cat curls up in your lap, or snuggles up to you in bed, and purr away? For me, it’s bliss. What about you?