Home Cats The Rainbow Bridge brings solace to those that have lost a pet;...
Advertisement 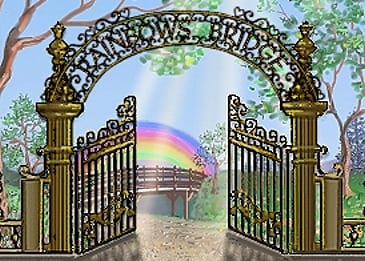 When our beloved pets die and pass on to another world, it is said they pass over the Rainbow Bridge, and wait there in peace while they wait for their beloved owners to join them.

This is very comforting to many of us who have or are losing our pets to disease, old age, or accidents. We want to feel our pets are at peace, just like, we want to feel the special humans in our lives, are in a better place. And just as with humans, we hope to be with them once again in the hereafter.

Paws mom had never heard of the Rainbow Bridge until she took her second kitty, Smokey Blue, to be euthanized. She was so thin – only three pounds. Her thyroid and kidneys were in poor shape. She was almost 18, and had been in her life since she was six-months-old. When she went to sleep, she just looked at her mom with loving eyes, saying thank you.

A few days later, the vets office sent a sympathy card with the Rainbow Bridge.
We wondered where did it all come from and what does it mean?


In her search Paws found it’s a rainbow that’s been turned to stone. The work is believed to have written sometime between 1980 and 1992, but who wrote it is not known. The theme of the poem is a mythological place where a pet goes upon death, eventually to be reunited with its owner.

When a pet dies, it goes to the meadow, having been restored to perfect health and free of any injuries. The pet runs and plays all day with the others. There is fresh food and water, and the sun is always shining. While the pet is at peace and happy, they miss their owner who had to be left behind on Earth.
When their owner dies, they come across the Rainbow Bridge. At that moment their pet stops what they are doing, sniffs at the air, and looks into the distance where they see their owner. They run as fast as they can until they are in their owner’s arms, licking their face in joy while their owner looks into the eyes of their pet who was absent on Earth, but never absent in their heart. Then side by side, they cross the Rainbow Bridge together into Heaven, never again to be separated.

• Paul C. Dahm, a grief counselor in Oregon, said to have written the poem in 1981 and published it in a 1998 book of the same name.
• William N. Britton, author of Legend of Rainbow Bridge , 1984. His website Legend of the Rainbow Bridge (http://www.legendofrainbowbridge.com/) states, “This heartwarming and comforting story is a must for anyone who has ever loved an animal. This little book, sweet, and inspirational, is filled with hope, comfort, beauty and possibility for all who have experienced the loss of a devoted and faithful companion. Animals create bonds in our hearts that can never be broken. The Rainbow Bridge, based on a Shaman’s stories of Native American legend shared personally with Mr. Britton, brings renewed hope and comfort to our hearts, knowing that one day we will all be united at Rainbow Bridge. His website continues stating, “Britton knows all about the therapeutic effect pets can have on a person. He is the cofounder of Companion Golden Retriever Rescue in West Jordan, Utah, an organization that has rescued over 5,000 Golden Retrievers since its creation in 1988. Mr. Britton continues his work with animals — training service dogs and assisting in rescues. He has authored numerous stories about animals.”

• And Dr. Wallace Sife, head of the Association for Pet Loss and Bereavement, whose poem All Pets Go to Heaven appears on the association’s website as well as in his book The Loss of a Pet.

About.com says the concept of this paradise where pets wait for their humans to join them goes back much further, appearing in “Beautiful Joe”, a sequel to Margaret Marshall Saunders’ book, “Beautiful Joe’s Paradise. About.com states, “In this green land, the animals do not simply await their owners, but also help each other learn and grow and recover from mistreatment they may have endured in life. But the animals come to this land, and continue to true heaven, not by a bridge but by balloon.”
The newsgroup rec.pets.dogs, posted about Rainbow Bridge on the internet on Jan. 7, 1993, quoting the poem from a 1992 (or earlier) issue of “Mid-Atlantic Great Dane Rescue League Newsletter”, quoting it from the Akita Rescue Society of America. Other posts from 1993 suggest it was already well established and being circulated on the Internet at that time, enough for the quotation of even a single line to be expected to be recognized by other newsgroup readers.

The inspiration for the poem is believed to have come from an ancient 13th Century Norse legend where Bifrost, a rainbow bridge that reaches between Midgard (the world) and Asgard, the realm of the gods, where worthy Norse warriors crossed to Valhalla.

Other interesting facts about the Rainbow Bridge, while not pet related are as follows:

Some of the quotes about the human/pet connection on Britton’s promotion of his book at http://www.likemindspress.com/rainbow.htm include:

Graham has been quoted as saying that God has a special reason and place for each of His created beings. Animals, too, have a purpose in God’s creation. Man, as the highest order of creation, has been given dominion over the animal kingdom (Genesis 1:26-28).

Continuing he stated, the Bible itself does not indicate that there is life after death for animals. It may be that God’s purpose for animals is fulfilled on this earth. However, if animals would make us happier in heaven, surely there will be a place for them there. Some Bible interpreters have called attention to Isaiah’s description of the peace of God’s future kingdom where he says that “the wolf and the lamb will feed together, and the lion will eat straw like the ox” (Isaiah 65:25). Heaven will lack nothing that is good and that will bring glory to God.

Whatever the origin, the Rainbow Bridge provides comfort to those that have lost their beloved pets. My neighbor, Kim, just lost her beloved Pepsi to cancer. She and the cat had such a strong bond that he would lick his hair off from separation anxiety if she was away for any length of time. Hopefully, he is now frolicking in a grassy meadow, out of pain, anxiously awaiting Kim to join him. There are many waiting for us on the Rainbow Bridge. Paws’ mom certainly hopes the four that have gone on – Victory, Smokey Blue, and Tubby – will be reunited with her and her other beloved felines on the Rainbow Bridge.

What do you think of the Rainbow Bridge? Do you have pets that are waiting for you on the Bridge? Has this legend and story helped console you with the loss of a pet? Please share your thoughts.