Home Cats Paws reflects on where Memorial Day came from 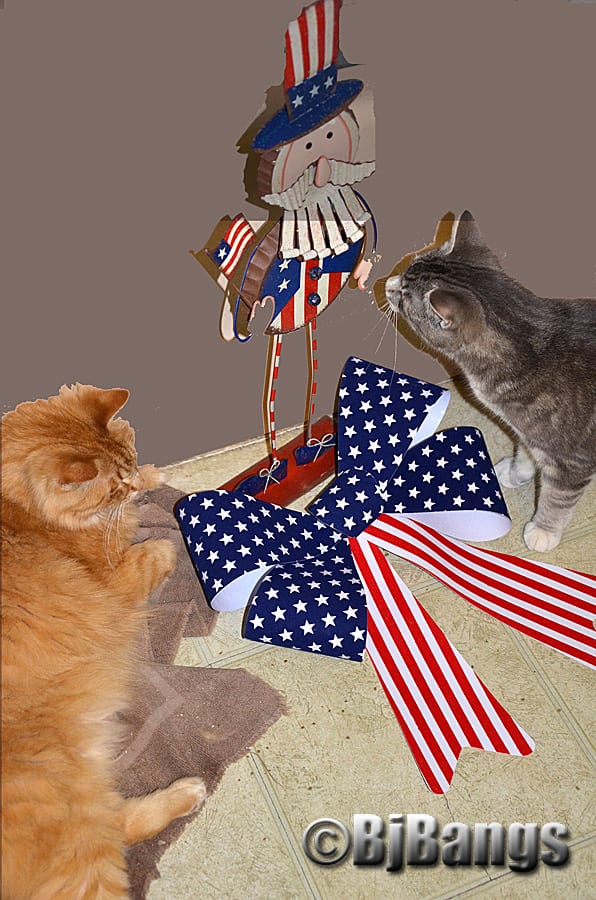 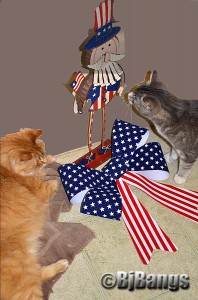 Memorial Day 2013 is being celebrated with flags, parades, and ceremonies honoring those that gave their lives in honor of the United States.

The day is being observed across the country with flags, decorated graves for those that died in service, barbecues, family get-togethers, and a day off from work to perhaps reflect on those that gave their lives in honor of this country, and take a reprieve from life’s every day frenzy, and mark the official beginning of summer.

Paws wanted to reflect upon this day because we kitties celebrate and honor our servicemen throughout the years. And Paws take pause, wondering how did it all come about.

Paws asked mummy to do a Google search, and come up with some answers. And as we find the answers together, we pay reverence to those that gave their lives and served to protect their country today, yesterday and tomorrow. We must point out that Memorial Day honors those that died in the U.S. Armed Service, while Veteran’s Day honors all American service people.

It appears that Memorial Day sprung out of the Civil War, an event that tore the country apart. It 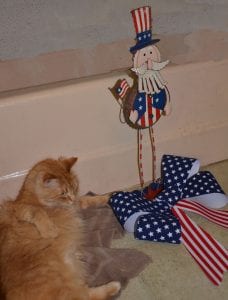 was a divisive event that eventually unified the country, but even though the USA was one country by law, it remained socially divided until the latter part of the 20th century. Some of those unhealed wounds remain today. If you don’t believe it, talk with a person with real strong Confederate or Yankee sentiments. 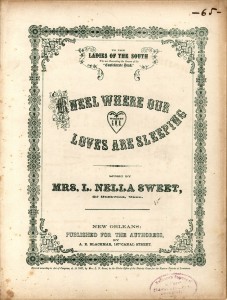 A hymn published in 1867, Kneel Where Our Loves are Sleeping by Nella L. Sweet was dedicated to the ladies of the south who were decorating graves of the confederate dead. (http://www.usmemorialday.org/backgrnd.html cities Duke University’s Historical American Sheet Music, 1950-1920).

Kneel where our loves are sleeping, Dear ones days gone by,
Here we bow in holy reverence, Our bosoms heave the heartfelt sigh.
They fell like brave men, true as steel, And pour’d their blood like rain,
We feel we owe them all we have, And can but weep and kneel again.

Chorus
Kneel where our loves are sleeping, They lost but still were good and true,
Our fathers, brothers fell still fighting, We weep, ’tis all that we can do.

Verse 2
Here we find our noble dead, Their spirits soar’d to him above,
Rest they now about his throne, For God is mercy, God is love.
Then let us pray that we may live, As pure and good as they have been,
That dying we may ask of him, To open the gate and let us in.

Kneel where our loves are sleeping, They lost but still were good and true,
Our fathers, brothers fell still fighting, We weep, ’tis all that we can do.

In May 1966, President Lyndon Johnson proclaimed Waterloo, NY the birthday of Memorial Day.

Memorial Day was officially proclaimed on May 5, 1868 by General John Logan, national commander of an organization comprised of Union Veterans – the Grand Army of the Republic – in his General Order No. 11. He declared May 30 as Decoration Day, a time for the nation to decorate the graves of the war dead with flowers, a time when flowers would be in bloom across the country.

Decoration Day was first observed on 30 May 1868, when flowers were placed on the graves of Union and Confederate soldiers at Arlington National Cemetery.

In 1873, New York became the first state to observe the holiday, and by 1890 all northern states had followed suite. However, the South refused to celebrate Memorial Day until after World War I when it was changed from honoring too honoring Americans that had died fighting in any war, not just the Civil War. It is now celebrated in almost every state on the last Monday in May. 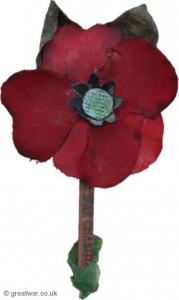 It was American teacher Moina Michael who came up with an idea to wear red poppies on Memorial Day.

The cause was near and dear to her. Born in Good Hope, Georgia, in 1869, her father was Confederate veteran John Marion Michael. In Flander’s Fields, a poem by John McCrae, became very popular during what then was called the Great War.  The poem refers to poppies that grew near the battlefields of that horrific conflict. It goes like this:

In Flanders fields the poppies blow
Between the crosses, row on row,
That mark our place; and in the sky
The larks, still bravely singing, fly
Scarce heard amid the guns below.

We are the Dead. Short days ago
We lived, felt dawn, saw sunset glow,
Loved and were loved, and now we lie
In Flanders fields.

Take up our quarrel with the foe:
To you from failing hands we throw
The torch; be yours to hold it high.
If ye break faith with us who die
We shall not sleep, though poppies grow
In Flanders fields.

She was so inspired by this poem that she published her own poem, We Shall Keep Faith, which goes:

We cherish too, the Poppy red, That grows on fields where valor lead, It seems to signal to the skies, That blood of heroes never dies.

That custom was adopted by France’s Madam Guerin, who later became known as the French Poppy Lady, while visiting this country. When she returned to her homeland, she made artificial red poppies to raise money for war orphaned children and widowed women. This tradition spread to other countries. In 1921, the Franco-American Children’s League sold poppies nationally to benefit war orphans from France and Belgium. One year later, the League disbanded. Then Madam Guerin approached the Veterans of Foreign Wars (VFW), who took over the program. In 1922 the VFW became the first veterans’ organization to nationally sell poppies nationally. Two years later their “Buddy” Poppy program was selling artificial poppies made by disabled veterans.

On June 28, 1968, Congress passed The National Holiday Act of 1971 which changed the day from May 30 to the last Monday in May to give the federal government a three-day weekend.  This change has long been criticized for stripping the meaning from Memorial Day and making it a three-day weekend.

What do your kitties think of Memorial Day? How are you celebrating this day? Paws, for one, is writing about it, and thinking that perhaps, if mummy has some extra time, she’ll give us some extra treats. We certainly do hope she remembers to pause for a moment of silence today and reflect? What about you? Do you think we should return to a stand-alone holiday? Please share your thoughts.