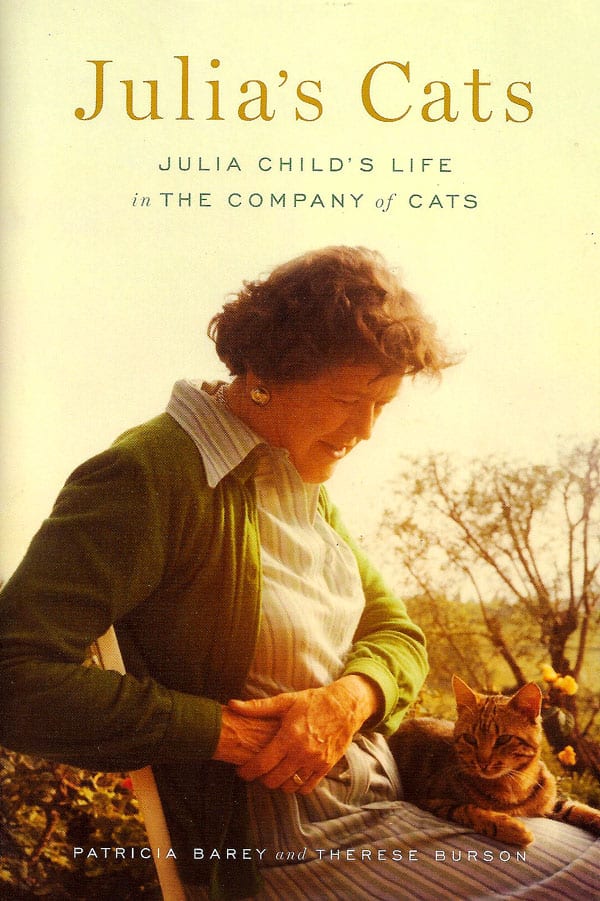 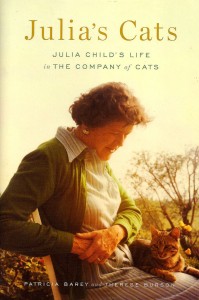 World famous gourmet cook Julia Child was a true cat lover. Unbeknownst to many, her cats were as much a part of her life as her fine cuisine, cooking, Paris, and her true soul-mate and husband, Paul.

The award-winning book, Julia’s Cats, written by Patricia Barey and Therese Burson, details how important cats were in life of this gourmet aficionado. The story is indeed a love story – a love story of Julia and Paul’s incredibly special bond, and their unique connection with the felines that came into their life. The story brings the connections to life, and one can just picture the cats having their own special seating stools, not only in Julia’s home, but in restaurants throughout the city as well.

Authors Patricia Barey and Therese Burson detailed Julia’s story with her feline companions. Published by Abrams Image in 2012, the story is of interesting photos, detailing a time when both humans and cats lives were simpler. We can just picture the romance of being in Paris in the 1950’s, and how beautiful the City of Light must have been at that time.

Best known as a world-famous gourmet cook who brought fine cuisine into American homes via her television show, Julia Childs never felt like a complete person without a cat in her life. The felines truly helped her find joy in her life.

Julia’s husband worked for the state department, and their life in Paris came to an end, but the days in that beautiful city would remain special years forever. It was interesting to find that cats were welcome guests at people’s homes and in restaurants. The French truly did love their cats. Cats had a special place with all Parisian’s, in addition to Julia.

Julia’s love for cats so intense. The beginning line on the book cover, which feature’s Paul’s photographs, says, ‘Une maison sans chat, c’est la vie san soleil.’ Translated that means a house without a cat is a life without sunshine. That also describes how the couple felt about cats. Their family was no complete sans chat.

The story details how Julia arrived as a newlywed in Paris in 1948. She was 36-years-old and totally enthralled by the wonders of Paris. There were lots of places to visit, lots of places to dine on fine cuisine, and lots of new people to meet. She didn’t realize how much her life would change when a French kitty named Minette was delivered to her the door. Her housekeeper had brought a large market basket containing a black and mud colored ball of fur with green eyes. She thought no home was complete without a cat. For Julia and Minette, it was love at first sight.

Minette had come to catch mice in the kitchen. But this special kitty became much more than a mouse catcher. She managed to wrap her paws around Julia’s heart, which ignited a passion for poussiequettes (a term Julia came up with to describe pussy cats). We learn of Minette had her own special seat at the table, having become much more than just a cat. She had become a very special member of the family.

Minette became center stage for Paul, Julia, and the parade of friends, and later culinary students that would come visit their abode.

Some of the fascinating notes included in the 144-pages include the city of light being a haven for cats since Roman times. Julia notices cats in museums, cathedrals – some hiding, others in plain sight. She tells how cats have fired the imagination of writers from Montaigne to Victor Hugo to Cocteau. She talks about how the cats have changed the course of history by driving the rats speaking the plague in Europe. She tells of practical cats (mousers), elusive cats in alleyways, beautiful cats sunning themselves on park benches, regal cats taking their owners out for strolls, stopping traffic along the Champs-Elysees.

Julia passion for cats was intense. She tuned into both the cats and their humans, greeting every kitty that crossed her path, especially the black ones. She coined her own unique term of endearment for cats, poussiequette.

It’s hard to believe that Julia Child was ever insecure about her culinary talents, but she was. When she arrived in Paris, she was determined to replicate some of the special foods that she and Paul had discovered. He became her tasting tester. Also hard to believe is that when she attended culinary school, her first instructor sabotaged her passing the class. That was later rectified, and her career began to take off.

As her career blossomed and she introduced Americans to the art of fine cuisine, her passion for cats continued. The book is filled with rare personal photos, and is based on anecdotes found in Julia and Paul’s letters. People who knew her well share their story. The story of Julia’s cats follows her life with cats from Paris, to Provence, Cambridge to California.

Julia’s Cats is laced with a host of French phrases and even a recipe or two. More information can be found at www.juliascats.com.

Just send Paws your email address and shipping address in the contact form, and put Hills gift basket in the subject line. Winners will be drawn after midnight on Dec. 2. Winners will be notified via email. Contest rules are set forth here. Paws for Reflection will post a photo of the gift basket once photos are available?
What do you think of gourmet food? Do you love to cook? Do you enjoy entertaining? What’s your favorite dish? Did you ever watch Julia Child on television, or try any of her recipes? What do you think your cats would think of her gourmet food? What do you think you would felt about her cats? Please share your thoughts and comments.