Home Cats Cat History Friday, the 13th and black cats, how did these superstitions become entangled?

Friday, the 13th. Today is the second one this year, and there’s lots of banter about what an unlucky day it can be. Ironically, it is exactly 13 weeks after the first occurrence in 2013.

It can happen from one to three times a year, and some sources content it is the most widespread superstition in the United States today. Some people refuse to go to work on Friday the 13th; some won’t eat in restaurants; many wouldn’t think of setting a wedding on the date. Imagine what your life might be if your fate was to be born on this unlucky day? 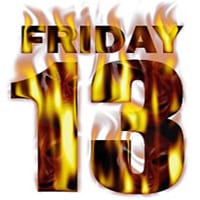 Some become so mired by the fear of malaise on Friday, the 13th, they become paralyzed with anxiety, something called paraskevidekatriaphobia (fear of Friday the 13th). They stop life as normal, refusing to go to work, eat out, or celebrate special events. Wow for those that were born on the fateful day.+

While cats were revered as almost Gods in Egypt, their status dropped into the pits during 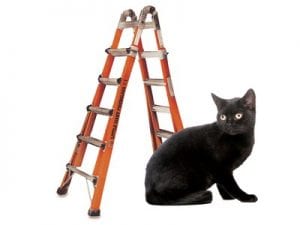 the Middle Ages, and black cats became associated with witchcraft. Since it was believed that a witch had the power to transform herself into a cat, it was thought likely that a cat who crossed one’s path was a witch in disguise. And if the cat crossed the path on Friday, the 13th it was even worse.

Even the Pilgrims are said to believe that black cats could hinder one getting to heaven. They brought those beliefs with them when they came to America.
However, How the black cats and Friday, the 13th became entangled is a bit of mystery. But the witch connection may be a link.

The superstitions surrounding Friday, the 13th date back to the mid 1800’s; however, the reasoning dates back far beyond that. They connect the number 13 and the day Friday as both being unlucky. When the two are combined, it’s even worse.

Paws found the earliest known documented reference in English is said to be in Henry Sutherland Edwards’ 1869 biography of Gioachino Rossini, who died on a Friday 13th.
Rossini was surrounded to the last by admiring friends. Like many other Italians, he believed Fridays were unlucky and 13 was an unlucky number. Then one Friday, the 13th in November, he died.

Some connect the unlucky number 13 with an ancient Nordic myth about 12 gods having a dinner party at Valhalla. Loke, the god of mischief, was the 13th guest. He arranged for the god of joy and gladness to be shot with a mistletoe-tipped arrow. He died and the whole world was thrust into mourning.

There is also a biblical reference to 13 being unlucky. Judas, one of Jesus’ twelve apostles, was supposedly the 13th guest to sit down at the last supper. Judas later betrayed Jesus.

Both recount how the 13th person at the table resulted in the death of the guest of honor.
Ancient Christianity also gives some clues as to why Friday is perceived as unlucky because:

• Christ was crucified on a Friday, and his crucifixion is celebrated the Friday before Easter.
• Cain is believed to have killed his brother Abel on a Friday, perhaps even Friday 13th.
• Eve tempted Adam with the forbidden fruit on a Friday.

Later, in the 14th century Geoffrey Chaucer referenced Friday as being an unlucky day in his Canterbury Tales, writing, “and on a Friday fell all this mischance”.

Other superstitions about the day include:

• Seafarers have long considered it is bad luck to set off on a journey on a Friday.
• People were usually hanged in Britain on Fridays

Upon further investigation, we find that in numerology, the number twelve is considered the number of divine organizational arrangement or chronological completeness, as in:
• 12 months of the year
• 12 hours of the clock
• 12 gods of Olympus
• 12 tribes of Israel
• 12 Apostles of Jesus
• 12 successors of Muhammad in Shia Islam
• 12 signs of the Zodiac
• 12 years of the Buddhist cycle, etc., whereas the number 13 was considered irregular, transgressing this completeness.

Do you have any ideas on why the superstitions about black cats and Friday, the 13th have become intertwined? Share your thoughts? Do you think 13 is an unlucky number? I for one just love black cats, but not everyone feels that way. Perhaps if we have more information, we can dispel these superstitions. Paws has two black feline family members, and they are just the best.