Home Cat Safety Cats, like humans, get frostbite and hypothermia 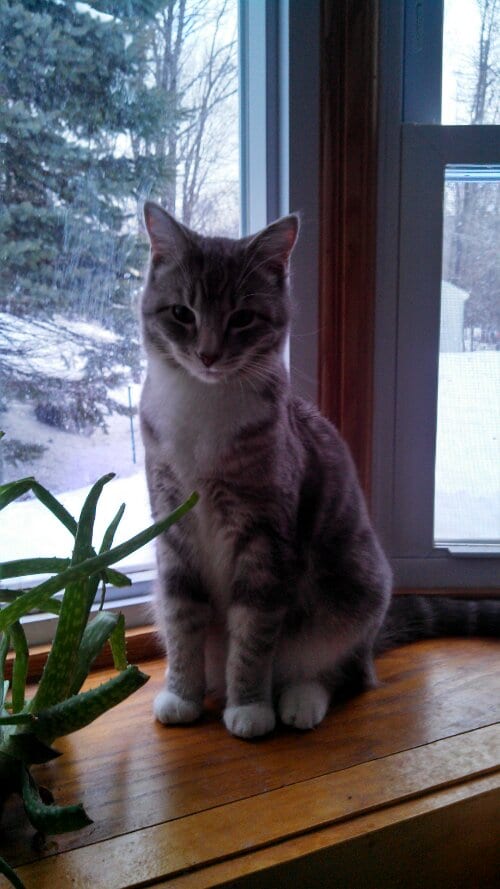 When the temperature drops below freezing (that’s below 32 degrees Fahrenheit), our domestic cats who stray outside and our feral friends who don’t have adequate shelter can get frost bite and hypothermia.

Just last week,  there was a weather report citing the temperatures had dipped below freezing in all 50 states, including Hawaii. And with a lot of winter still ahead of us, we need to think of how to keep our pets safe.

While kitties in more moderate temperatures probably will fare OK, those that live in regions, like rural New England, where the temperatures plummet into the below zero range for days at a time, we need to take care and protect our inside domestic friends, and the ferals that have no home.

One way of doing this, according to the US Humane Society is to make sure your inside domestic cat stays inside when the temperatures drop into the sub-zero weather.  They may want to go outside to roam, but there’s a chance they might not make it back in. That’s not a chance any serious cat person should take.

Years ago, Paws’ grandma let out her favorite kitty during a raging snowstorm. She figured he would just meander out to the near-by barn. Once the storm let up, she spent hours looking for her favorite kitty. He was nowhere to be found, and some 60 years later, it remained a mystery what happened to him. It was obvious, he had perished in the storm – whether it be from hypothermia, frostbite, becoming disoriented, or falling victim to a predator.

The ferals don’t have that choice. According to Alley Cat Allies, we can help them by providing them with warm, well-insulated and appropriate sized shelters, which are small enough to trap their body heat do it in turn can warm the shelter.

Here are some additional tips on how to best help the cats stay safe and warm:

There’s no question fur helps insulate cats in cold weather as well as helps prevent the body from taking on too much heat. Their fur acts as a thermal regulator to slow down the process of heat absorption and heat loss.

When the temperatures turn warmer, cats will start shedding their thick undercoat that was needed to trap in body heat during the winter colder months. This outer coat is optimal for handling heat, but not extreme temperatures. That’s why it’s important to take some steps to keep kitties cool in summer’s hottest weather.

Frostbite, hypothermia and even death can be consequences of prolonged exposure to cold weather. PetMd.com defines hypothermia as damage caused to skin and other tissues. Most commonly affected are the paws, ears, tail, or any area where the fur is thin. When cats get wet, they are even more susceptible to frost bit. Just imaging how wet the cat can get when there’s a raging blizzard with no shelter available.

While cats recover from minor frostbite, a major dose of it can lead to dis-figuration and even amputation.

PetMD.com cites what to look for: “Affected areas will be pale to bluish white in color and much cooler to the touch than surrounding skin. This is due to loss of circulation to the area, brought on by the cold. If the circulation returns, the affected area will be red and swollen, sometimes with a distinct line between the healthy and damaged areas. Usually the area does not become painful until the circulation returns.”

Even worse, extreme exposure to extreme cold temperatures, especially if wet, can lead to hypothermia,, which in cats is defined as a body temperature below 100° F. As the body temperature drops, the heart rate and other body activities slow and, if not treated quickly, can stop.

Hypothermia can lead to death. PetMD.com if a cat has hypothermia, he will shiver violently as his body attempts to generate warmth. The ears and feet will get noticeably colder as blood flow to these areas becomes restricted. If these areas get cold enough, frostbite will occur. As body temperature drops, your cat will become increasingly lethargic, his heart rate and respiratory (breathing) rate will slow and eventually he will slip into a coma.

Cats are hypotherms, which means they adjust to internal heat gain and heat loss. That said, it means it’s important that all cats have an environment where they are able to maintain that balance, whether it be the extreme cold of winter, or the extreme high temperatures in summer.

Cats don’t release heat through their paws, nose, mouth or tongue. However, those areas are very susceptible to frostbite.

The best course of action is to keep your domestic in a nice warm sheltered home during winter, and help the free-roaming community cats by providing some sort of shelter.