Can feral cats co-exist of even happily live with humans?

Can feral cats live inside? Can they learn to live with any human, even if it be just the right one? Ferals are known as wild, not domesticated cats. While there may not be any empirical scientific evidence that would say, ferals can learn to live with humans, Paws shares some factual stories that say they can.

Anne Panarese and Paul Lyons at the Sanctuary at Sebago, Maine, ‘On Behalf of Challenged Cats’ and HART (the Homeless Animal Rescue Team in Cumberland, Maine ) are two examples of places where feral cats can peacefully co-exist inside, and in some cases even learn to love their human caretakers.

Feral cats are afraid of humans. They are timid and fearful. They can’t be socialized and are not suitable to living inside or with people. They will crouch and look not look at you if you contact them. On the contrary, strays, that were once household cats, have a different body language. They will look at you with their tail straight up.

At HART, we find the first room on the left has some true ferals; others are just stays that have become afraid of people. There’s plenty of room for them to hide when a scary human comes in to feed them. There are litter boxes galore, and their rooms are cleaned daily. The cats seem to get along fine – probably because they have been spay/neutered, preventing the tendency to fight over their sought-after mates. The ferals also know food will always be there, and that changes the personality of the cat. Some have been there since HART’s beginning in 1997 when they were located in a barn. In 2004, a state-of-the-art new building was constructed with several rooms designated for specific cat personalities and mannerisms.

Here we find lots of towers and boxes for hiding. We find a Turkish Angora senior, who is totally overwhelmed and cage aggressive. The volunteer tells us, ‘This is a quiet place.’ There’s another senior orange tabby Chandler, and one-year-old Cooper. Four or five of these cats are true ferals. The others are skittish and need quiet. Some have come from Friends of Feral Felines (FoFF) through their trap, neuter, return program of local cat colonies. 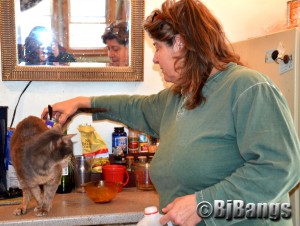 Anne Panarese has been helping trap feral cats for years. She and Paul have about 9 ferals living in their home in Sebago, Maine. Most of these cats were considered feral. Today, many will approach her daily for their snuggle time. There’s Betsy Mitchell, who has been a guest at Panarese’s sanctuary for 6 years. She comes up for her belly rub. It’s taken almost 5 years for her to get to that stage.

Some of the ferals shrank and hid at the sight of Paws coming to do a story. Others would peer our and come out for awhile. Others wanted to hog the show and be center stage for the photo opps. Panarese demonstrated how she gives pills, syringes, ear treatments, and more to these ‘wild cats’.

She gets out the laser, and about 6 kitties start romping for joy, chasing the red light and each other to have their fun.

Still others sit peacefully in the window. A couple pose for photos, and even let Paws’ mom pet them.

Because there’s so much snow on the ground, Panarese’s cats are living inside the house with the run of the downstairs. We re-connect with James Bond, a beautiful black and white long-haired cat we’d met about 4 years ago. The little grey one was so scared when we first visited, he was hidden underneath the bed. Some 4 years later, he was sitting on the cat tree, and willing to play, in front of this human.

Panarese claims with time, patience and enough tender loving care, any feral will come around to the right individual. Not all people are cat people, and the cats know it. These cats can learn to trust again, she said. It takes time. They may not snuggle up in your bed every night, but they do learn to choose who to trust, and who not to trust. Some of her cats do snuggle, and hang out on the bed.

If there is any scientific evidence that ferals can learn to live with humans, Paws would like to share that information. It kind of crosses the line to the humans that can successfully live with wild animals, but not quite. This conversation truly brings Paws to the fact, that over 70 percent of all ferals taken to animal shelters are euthanized because they cannot be adopted into homes. Paws does not advocate that these cats go into the traditional two children family with a pristine house, nor do they go into an elderly person’s home. But we do wonder whether all these cats need to be euthanized. We do wonder if more sanctuaries like Panarese could help solve the feral cat problem. Please weigh in with your thoughts and stories.