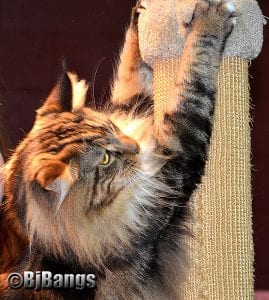 What’s the story behind the Maine Coon, a cat that many think is descendant of bobcats and raccoons?

Its origin is shrouded in folklore, much because of its long hair, sturdy build, tufted ears, and some stories saying it originated from a domestic cat interbreeding with a bobcat. Other stories say it was a raccoon because of its coloration and bushy tail.

One of the more famous tales in Maine involve France’s Queen Marie Antoinette, who was executed in 1793 during the French Revolution. She’s most famous for the message to the poor populace, that since they couldn’t afford to eat break, let them eat cake. The story goes that before her death, Antoinette attempted to escape France with the help of Captain Samuel Clough. She loaded Clough’s ship with her most prized possessions, including six of her favorite Turkish Angora cats. Although she did not make it to the United States, her pets safely reached the shores of Wiscasset, Maine, where they bred with other short-haired breeds and evolved into the modern Maine Coon.

Another folk tale involves Captain Charles Coon, an English seafarer who kept long-haired cats aboard his ships. Whenever Coon’s ship would anchor in New England ports, they’d exit the ship and mate with the local feral cats. When long-haired kittens began appearing in the litters of the local cat population, they were referred to as one of Coon’s cats.

Still other legends have the cat coming from the Vikings and being a descendant of the Norwegian Forest Cat.

These are some interesting thoughts. Paws’ mom had a Maine Coon Cat look-alike. Definitely a tabby, she wasn’t massive, but she sure looked a bit like a raccoon. She never really thought of her resembling a bobcat. Today many years after Victory has passed on, we have a soft spot for the Maine Coon.

Do you think there’s an ounce of truth in any of these stories. There is a house in Wiscasset, Maine, where Marie Antoinette was going to move. We have a photo to prove it. Do you think Maine Coon cats look like raccoons, or bobcats? Share your thoughts.