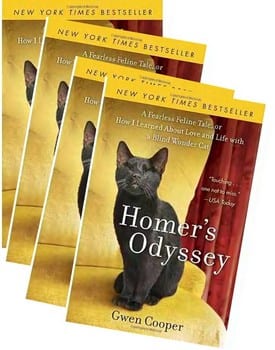 Homer, the Blind Cat’s legacy lives on. Even though Homer passed over the Rainbow Bridge a year ago this past Aug. 21, he continues to share his story. And his story will take an even different twist as the author Gwen Cooper announces she’s hard at work on a sequel to Homer’s story, called ‘Homer’s World: A Fearless Feline’s Odyssey Continues.’

Paws can’t wait to put our paws on that one because we just fell in love with Homer’s story, so much so that our feline family took the leap into the world of blogging, and have plans for our own book length stories.

It turns out that Paws’ mom isn’t Homer’s only fan. As of this writing, he has 14,900 Twitter followers and 553.905 Facebook fans. That compares to about 24,000 FB fans a year ago. Now, we know that Cooper has been hard at work promoting her book, ‘Love Saves the Day‘, but it also speaks to the fact that Homer’s story has captivated the lives of thousands.

It was 5 years ago today, Aug. 24 that ‘Homer’s Odyssey‘ was published for the very first time. It’s almost ironic that he passed 3 days short of the fourth anniversary of the book being published.


What’s so great about Homer’s story is that this blind cat could survive so many odds against him. What’s so great about the author is that she continues to give back a percentage of the books sales to help special-needs cats. In a recent email blast, Cooper writes, ‘Together, we’ve been able to raise more money, find more homes, and generate more awareness on behalf of special-needs animals than I ever, in my wildest dreams, thought possible’.

And while it’s good to pay the bills, the bottom line about most of us cat writers is that It Should Be About Bettering the Lives of Cats.

As Paws for Reflection reflects on Homer’s passing, we quote excerpts from a post from Sept. 21, 2013, Homer, the Homer, the iconic Blind Wonder Cat’s story & influence will live on. We write,

‘Even though Homer, the Blind Wonder Cat, who became an iconic feline to millions, including Paws’ mom, is gone – having passed over the Rainbow Bridge on Aug. 21, his story and influence will live on.

It’s true. The famous Homer, the subject of Gwen Cooper’s Homer’s Odyssey, a Fearless Feline Tale, or How I Learned about Love and Life with a Blind Wonder Cat, is gone from this life, but his story will continue to resonate with those that have read his book, and those that will read his book in the future. The best-selling novel chronicling his early years, the devotion of his Human, Gwen Cooper who took in this two-week old kitten who just had his eyes removed, and their incredible journey from her life as a single care-free gal in Miami, to her journey to reinventing herself through adversity to becoming an accomplished author.

Homer had almost 24,000 fans on his Facebook Page which is now devoted to helping special needs kitties. Even though Homer’s life ended at 16 years-of-age, his story and his book will continue to live on.

When Paws wrote this post, we had no way of knowing how true this would be. Homer’s story lives on, touching the hearts and souls of thousands, and raising the awareness of helping all special needs cats.

On this anniversary date of ‘Homer’s Odyssey’, Cooper is donating 100 percent of all her royalties on all copies of “Homer’s Odyssey” sold today—8/25, paperback and ebooks—to Tabby’s Place in New Jersey in Homer’s memory. Tabby’s Place is raising funds to care for Tanzy, a paraplegic 7-week-old kitten who, like Homer, can go on to live a wonderful life with a little extra care and TL

You can find the book in your local bookstore, or online here:

Do you still follow Homer? Did you read the book? Have you read ‘Love Saves the Day’? What do you think has made Homer an iconic cat? What’s your favorite part about the story? Please share your thoughts and comments.