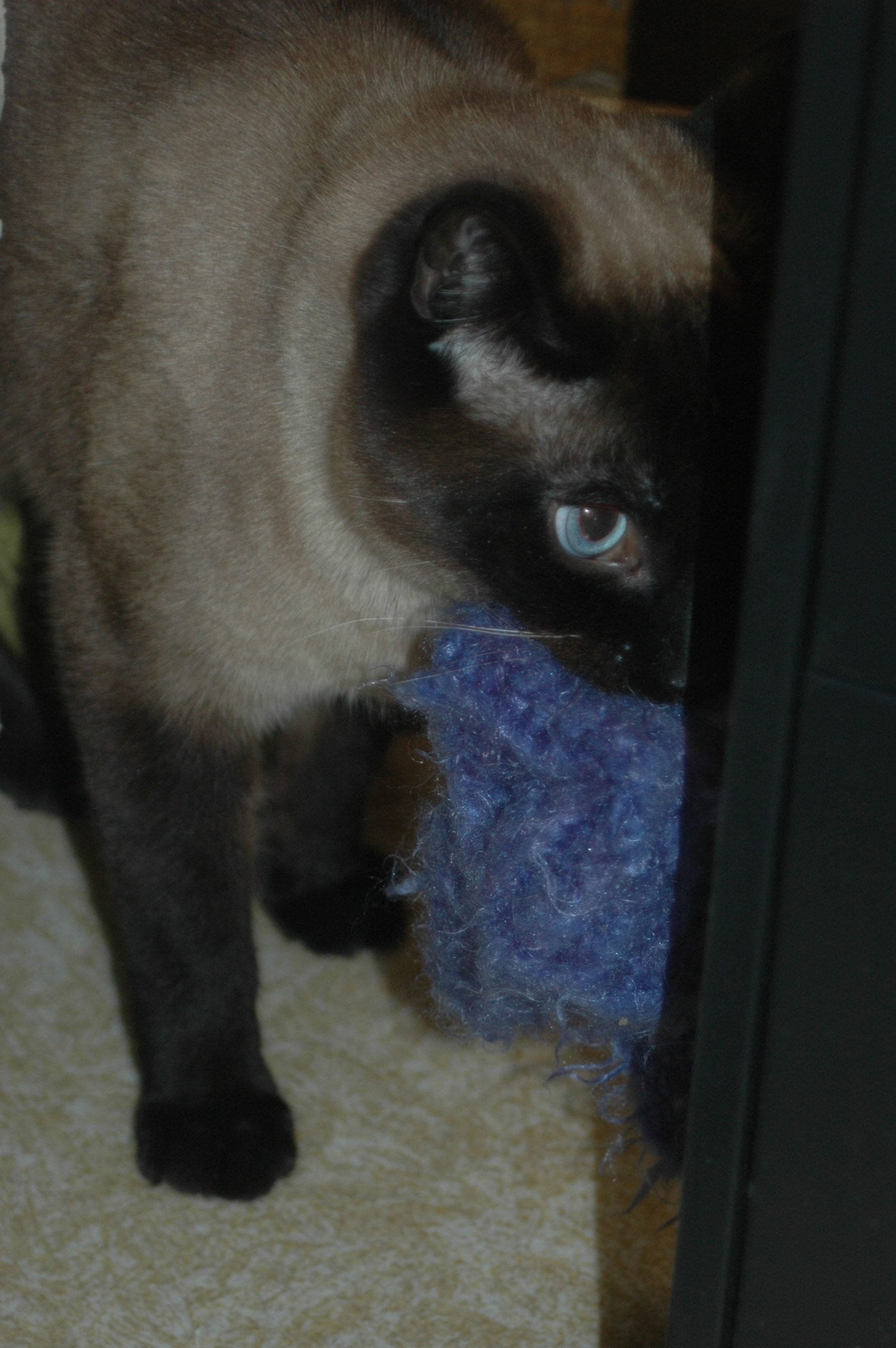 Siamese Cat history shows they originated in Siam, what is now Thailand. For years, it was once believed they came from Egypt due to the resemblance to the Egyptian Cat Goddess, Bastet.

Did they roam the Buddhist Temples? Were they protectors to the royal Thai family? The facts are sketchy, but it is true the Siamese Cat came from Thailand. 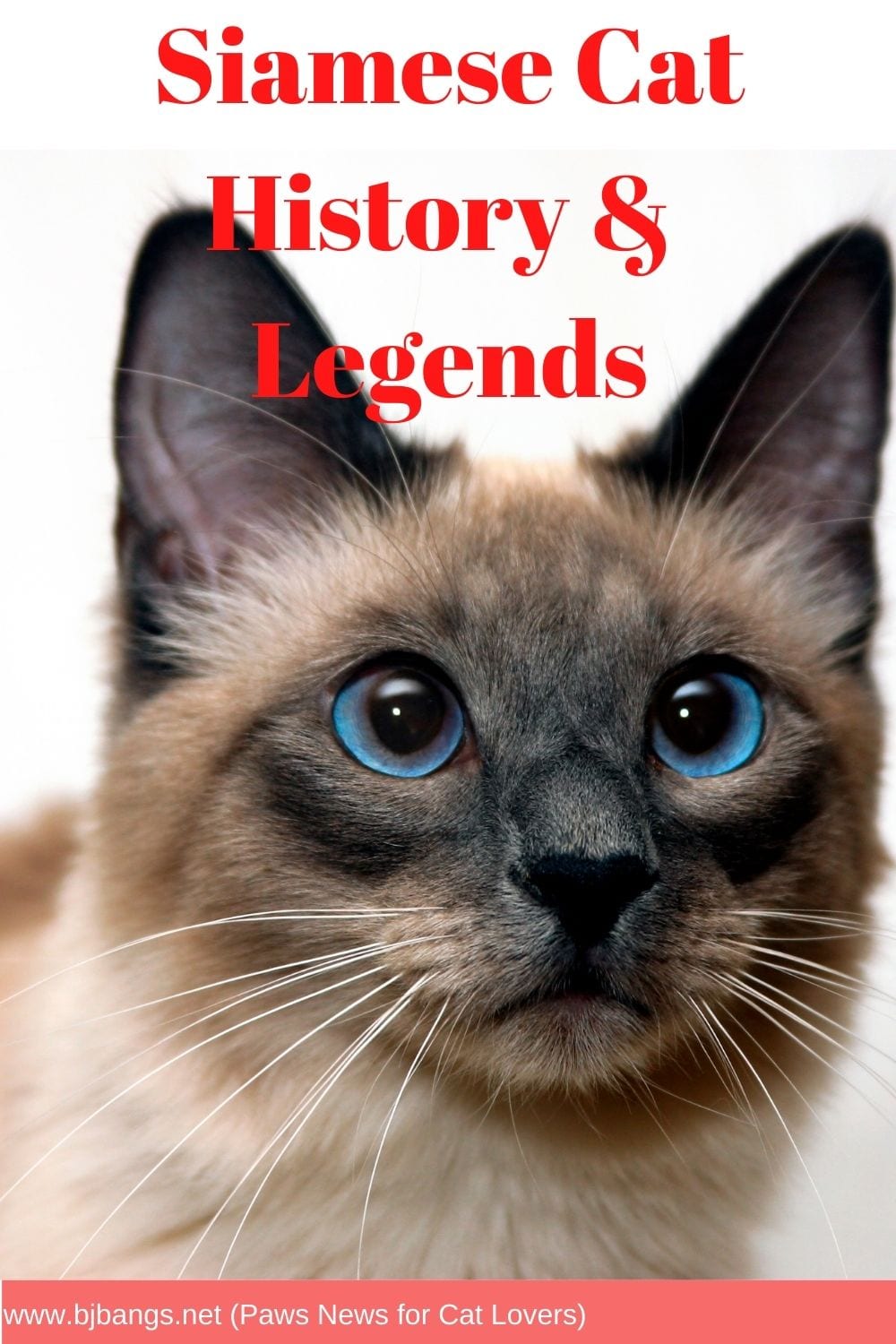 The beloved Siamese with their ‘meezer’ meows, Velcro personality, steel-blue eyes, and points that come in various colors, remains a favorite both in and out of the Cat Fancy.

When Paws went searching for history about Siamese cats, we found the first cat with Siamese markings appeared on an old engraving discovered by a Mr. Pallas on his journey into Southern Russia between 1793 and 1794. Another Siamese is found in the ‘Cat-Book Poems’ where drawings of cats of various colors and patterns are found.

In addition to the old Siamese cat, the Tamra Maew also describes other heritage cats of Thailand including the Korat cat (Malet), the Konja cat (Black cat), and the Suphalak (not to be confused with the  Burmese cat).

When the capital city Ayutthaya was sacked on April 7, 1767 at the end of the Burmese-Siamese war, the Burmese army burned everything in sight and ret

Thai legend has it that the King of Burma Hsinbyushin found and read the poem for the Thai cats in the Tamra Maew. The poem describes Thai cats as being as rare as gold, and anyone that owns this cat will become wealthy.

He told his army to round up all the Suphalak cats and bring them back to Burma along with the other treasures. Today  this legend is told in Thailand as a humorous explanation as to the rarity of Thai cats.

It is believed the Royal Family of Siam owned Siamese cats and used them to guard the ancient temples. According to Siamese Cat history, only royalty or noblemen were allowed to own them, and their cats served as spirit guardians.

When someone important died, a cat from their household was chosen to receive and house their soul. This lucky cat spent the rest of its life in luxury, pampered and cared for by temple priests. The dead person’s family paid for the cat’s upkeep, as they believed this would bring their loved one good luck in the afterlife.

On The International Cat Association’s (TICA) website, we find the original Siamese cats had crossed eyes and kinked tails, both traits that breeders now consider a show fault but have no impact on the cat’s health.

Legend also has it that two Siamese were sent to find a goblet belonging to a King. When they found it one was left to look after it. The other returned to tell the king where it was.

The one left behind became so scared of losing the goblet that it stared at it and wrapped its tail around the base tightly. This caused the cat to become cross-eyed and have a permanent tail kink passed on through its descendants.

Another tale tells of the tails of Siamese cats being used as ring holders by the Royal Princesses and that is how the kinks arrived.

Siamese Cats come to the UK and US

History has it that in 1884, the departing British Consul-General Gould was given a Siamese cat by the Siamese king as a farewell gift, and Gould considered it as a great honor since the cat came from those bred in the palace by the royal family.

Cat lovers brought the Siamese to America in the late 19th century, but there are mixed reports about when—and how—it traveled to the United States.

Some rumors say the Siamese first appeared in the U.S. courtesy of an American naval officer, who picked up two cats while on a tour of duty in Southeast Asia.

Other legends claim an American friend of the King of Siam was given Siamese cats as a gift, or that renowned opera singer Blanche Arral brought them back to America after touring Siam.

From 1889-1890, a Chicago cat club lists several registered Siamese cats, one of which was “imported from Siam” by its founder.

But what really brought attention to Siamese cats was when U.S. Consul David Stickles, a diplomat at the consulate in Bangkok, gave President Rutherford B. Hayes’s wife Lucy a Siamese cat named Siam in the late 1870s.

‘I have taken the liberty of forwarding you one of the finest specimens of Siamese cats that I have been able to procure in this country,” he wrote to the First Lady. “I am informed that it is the first attempt ever made to send a Siamese cat to America.’

Sadly, Siam fell ill and died after less than a year in the White House. According to legend, the president’s steward requested that the cat’s body be preserved. However, no stuffed kitties were ever discovered, suggesting that the tale might be more fanciful than fact-based.

Some 30 years later, in April 1909, The Siamese Cat Society of America was founded and the first standard for the Siamese Cat was approved.

Read more posts about Cats at The White House:

Over 34 types of colors and patterns

Since then what is considered vogue for the Siamese has changed. The seal point was the original and probably also the most well-known color. Breeders have since developed more colors and more patterns.

Today there are more than 34 different colors and patterns, including;

In the 20th century, the Siamese cat became one of the most popular breeds in Europe and North America.

The modern Siamese is characterized by:

TICA describes the breed as:

Interestingly, we find there are now 2 distinct types of Siamese cat:

In the Cat Fancy world, Traditional Siamese are rarely shown

The Governing Council of the Cat Fancy, the premier registration body for pedigree and non-pedigree cats in the United Kingdom, due to the vast difference between modern and traditional type and the fact that the GCCF judges them against each other, making it difficult for the traditional to compete.

However traditional Siamese can be shown under TICA and FB, Felis Britannica  – a non-profit making organization representing a federation of cat clubs across the United Kingdom –  because the traditional Siamese, referred to as the Thai Cat, are judged separately from the modern Siamese.

During the 1950s and 1960s, the breed’s popularity reached its peak and Siamese cats appeared in movies or animations such as:

At the same time in Thailand, breeding had dwindled. A statement written by Mrs. Stephen Dobrenchuk to a diplomat in Thailand in the 1950s reports that purebred Siamese cats were bred only by a few wealthy matrons.

Whether modern or traditional, we find Siamese are usually very loving, loyal, intuitive, demanding and social, and intelligent. They are very playful, entertaining themselves for hours, and they never tire of playing, no matter how old they are.

They are very talkative and let you know when there is something they want.

The Siamese, like the other breeds in its group, is a long elegant cat with

Is the Siamese one of your favorite cats? It sure is one of mine, as my Linus is just the most handsome, loving cat there is. He’s full of personality, and well, he knows he’s worshiped by his human. Weigh in with your thoughts and comments. To keep abreast of the latest Paws blog post, sign up for our email list below and get your FREE Guide to Stop Your Cat from Destroying Your Sofa.