FREE Guide0
Home Cats Cat Health Cats get heartworm & there’s no cure for what can be a...

Cats get heartworm. While not as common as in dogs, both indoor and outdoor cats are susceptible to getting heartworm. It is difficult to diagnose, is incurable and can be fatal, is very preventable, and most often affects the respiratory system, not the heart.

Paws for Reflection looks at this issue because there was some concern late last summer that Little Yellow, also known as Paws, had heartworm, not heart disease. He had a persistent cough that didn’t want to go away.

What is heartworm? According to the Federal Drug Administration (FDA),  this serious disease results in severe lung disease, heart failure, and other organ damage. While most common in dogs, it also affects cats and ferrets, wolves, coyotes, and even an occasional human. It is caused by a parasitic worm called Dirofilaria immitis and spread through a mosquito bite.
Although not as susceptible to infection as dogs, cats get heartworms after being bitten by an infected mosquito. However, cat is considered a resistant host of heartworms because the worms do not thrive as well inside a cat’s body.

Keeping kitty inside may decrease the risk of heartworms, but it does not prevent it. The American Heartworm Society cites a study in which 25% of the cats that tested positive for heartworms were considered to be indoor cats. 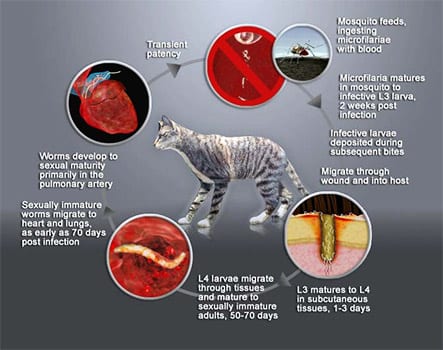 While infected dogs may have 30 or more worms in their heart and lungs, cats usually have 6 or fewer, and may have just one or two. But while the severity of heartworm disease in dogs is related to the number of worm, in cats, just 1 or 2 worms can make a cat very ill.
In cats, the FDA says the heartworms do not live as long as in dogs (the average lifespan is only 2 to 3 years) nor do they grow as long. Fewer heartworms mature into adults.
According to the FDA, ‘In cats, it takes infective larvae 8 months to mature into adult heartworms and produce microfilariae. This is about one month longer than in dogs. And the presence of microfilariae in a cat’s bloodstream is uncommon, with only 20 percent of cats with heartworm having microfilariae in the bloodstream, compared to 80 to 90 percent of dogs with heartworm. The presence of microfilariae in the bloodstream is also inconsistent and short-lived in cats.’ Therefore, it is much harder to detect heartworm infections in cats.

Many cats are able to spontaneously rid themselves of heartworms without showing symptoms. Others die suddenly from without ever showing signs of being sick.

Respiratory, not cardiac, issues are the most common symptom of the disease, due to the lung damage caused by the heartworms. Cats typically show symptoms of heartworm disease at two times – when the immature heartworms arrive in the heart and lung arteries and when the adult heartworms die.

According to the FDA, the immature heartworms arrive in the heart and lung arteries about 3 to 6 months after a cat has been bitten by an infected mosquito. 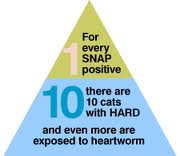 Many of these immature heartworms die, causing a strong inflammatory response in the cat’s lungs. This response is called heartworm associated respiratory disease (HARD). Cats can experience trouble breathing, an increased respiratory rate, and cough, It can be difficult to distinguish HARD from feline asthma or feline bronchitis. This is why the veterinarian thought there might be a possibility that Paws had heartworm.

According to the American Heartworm Association, heartworms in the circulatory system also affect the cat’s immune system and cause symptoms such as coughing, wheezing and difficulty breathing. Heartworms in cats may even migrate to other parts of the body, such as the brain, eye and spinal cord. Severe complications such as blood clots in the lungs and lung inflammation can result when the adult worms die in the cat’s body.

When the adult heartworms die, they release toxins into the cat’s bloodstream which cause lung damage, leading to respiratory problems or sudden death. Even the death of one worm can be fatal for a cat. Cats may also have nonspecific symptoms, like vomiting, decreased appetite, lethargy and weight loss, that mimic many other cat diseases. Cats rarely show signs of heart failure which is common in dogs.

There is no approved drug therapy for heartworm infection in cats, and the drug used to treat infections in dogs is not safe for cats. However, cats with heartworm disease can often be helped with good veterinary care that can stabilize the cat and develop a long-term management plan.

There is no FDA-approved drug for the treatment of heartworm disease in cats, although symptoms may be managed with medications.  Surgical removal of adult heartworms may be an option if the heartworms can be seen by ultrasound.  But surgery is risky, and if the heartworms are not removed intact, there can be potentially serious complications, such as shock and death.

Should Cats Be Tested For Heartworms?

It is recommended that cats older than 6 to 7 months of age be tested for heartworms before starting heartworm prevention. Consult with your veterinarian about the test. However, finding a reliable test can be tricky.

Veterinarians generally use two types of blood tests in combination to check a cat for heartworms.  Veterinarians use a combination of the results of blood tests, an analysis of the symptoms, and other tests such as  x-rays and an ultrasound of the heart. The American Heartworm Society recommends following up positive tests with:

This helps the veterinarian to  better understand the stage of infection.

Idexx Laboratories has developed a SNAP Feline Heartworm Antigen Test Kit SNAP is an enzyme immunoassay. According to their website, ‘the conjugate and the test sample are mixed and added to the SNAP device which is then activated, releasing reagents stored within the device. Color development in high and low antigen indicators is proportional to D. immitis antigen in the sample’.

According to 2ndchance info, the best screening detect products in the cat’s blood stream that are released by heartworms. ‘The most sensitive one your veterinarian can perform in the office is the Idexx Feline Heartworm Antigen Test which is sold combined with tests for feline leukemia and feline AIDs. If the test is positive, your cat has heartworms. However, It may take 5-8 months after the bite of an infected mosquito for this test to become positive. It also pushes the limits of the test’s sensitivity to detect an infection of a single female worm or multiple (smaller) male worms.’

That’s the test that 2 of my cats just had when they went for their routine wellness visit at the vets.

Prevention Is The Best Treatment
There are several FDA-approved products to prevent heartworms in cats, some that are  topical and others that are given orally. Some require a veterinarian’s prescription. Others do not. Some contain other ingredients effective in combating  intestinal worms, such as roundworms and hookworms, and other parasites like fleas and ear mites. They include, but are not limited to:

Have you had your cat tested for heartworm disease? Is your cat on a heartworm preventative? Do you know any cats that have had heartworm? Weigh in and share your thoughts and comments. 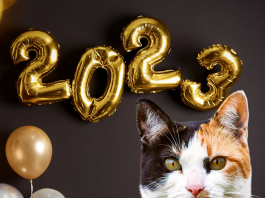