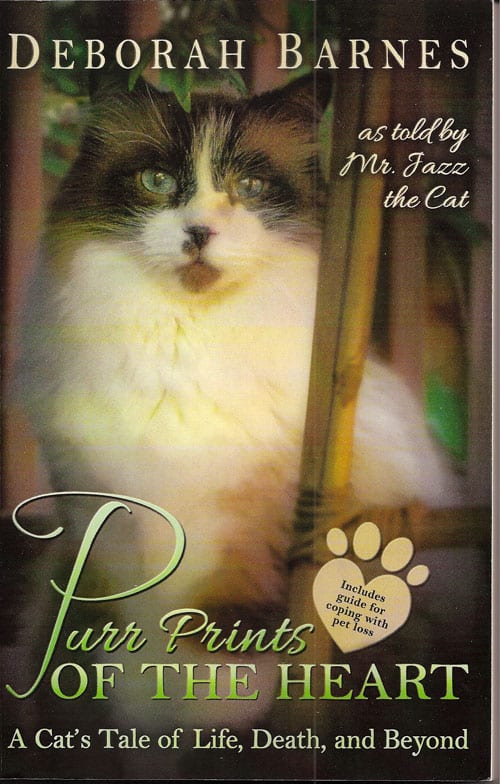 When is it time to let go of our pets, and let them pass peacefully, and move to a place of peace – The Rainbow Bridgehttps://www.bjbangs.net/?s=Rainbow+Bridge – while they wait in a bit of a special Purgatory for their humans to join them?

Award winning blogger at ‘The Chronicles of Zee & Zoey’ and author Deborah Barnes delves into this difficult emotionally ridden issues through a cat’s eyes in her latest book, ‘Purr Prints of the Heart, A Cat’s Tale of Life, Death, and Beyond’.

This poignant story is told from the eyes of Mr. Jazz, a handsome Ragdoll, who shared Deb’s life and heart for over 15 years. Based on the story of his life, Mr. Jazz begins sharing his story from birth. He never knew he was ‘less desirable’ with a runny eye because his Feline Mom told him he was very special. It was a statement he took to heart.

It turns out Deb had seen a picture of a Ragdoll, and knew that she wanted one. When she found this special kitty, she didn’t care if he had a runny eye. He was coming to live with her in a forever home. He was scared, but his feline Mom assured him, it would be, not just OK, but awesome!

He goes to a very different world – one without the musty smell of dog and carpets, to one of freshness, despite a couple of canines and several felines He quickly befriends the Golden Retriever, Bailey, and older wiser cat, Kit.

The Rainbow Bridge is something that Mr. Jazz does not understand at all. When Bailey passes on, Kit tries to explain. Despite her wisdom, it remained an enigma.

We get into Mr. Jazz’s personality as he talks about his move from New York to Florida, his human’s divorce, a new Dad, house renovations, job loss and subsequent re-invention of themselves. We all know cats don’t like change, but just like us humans, they usually learn to adapt.

‘Purr Prints of the Heart’ is extremely well written, and at no point does it belabor an issue. It comes with many kudos from the likes of well-known pet columnist Steve Dale, Susan Logan, long-time editor of Cat Fancy and Amy Shojai, author of almost too many cat books to talk about.

The blogger behind Paws for Reflection was pretty amazed at the book, having met Deb Barns at 4 or 5 Cat Writer’s Association Conferences. She always seemed so poised and confident, like nothing in the world would phase her. We were amazed how after Mr. Jazz died she could present herself with such stature. We also were shocked at how much pain she had endured over the loss of each and every one of her pet family, but nothing compared to the loss of Mr. Jazz, and very shortly after the shy kitty, Harley. Kit had asked Mr. Jazz to help the humans let go so he could pass over to the Rainbow Bridge. Mr. Jazz likewise asked Harley to help as well. The message – the cats knew their time had come, and they wanted their humans to help them make that journey as peacefully as possible. They know their time has come before their humans can let go. The cats let their humans know when the time has come.

Mr. Jazz had turned 15. He was not grooming himself as well as I the past. He had mats. He was losing weight. He was missing the litter box.

The story makes Paws for Reflection look back to my feline family members that have passed over the bridge. When is it time to say good-bye? Should we help them pass peacefully, and not wait till their final breath?

Victory was a beautiful Maine Coon Cat look-alike. She was well over 15 in 1995, when our life went upside-down. My fiance, also my boss, had died. I lost my job. The house was unbearably lonely. I moved into an apartment with 2 other people. There was no way that I could bring 2 cats into the mix. Victory went to live with my human Mom. She kept telling me how she had become unkempt, missed the litter box, and could barely get into a chair. I think she rallied when she saw me because I didn’t see it, or perhaps was just in denial of the inevitable. I visited often, but I still didn’t accept this. One morning, Mom called. Victory had died while walking across the floor. She called my brother-in-law to bury her out back.

This story comes to mind as Deb talks about the endless lengths she went through to prolong her days with Mr. Jazz – syringe feeding, puppy pads, special bedding…. It was impossible to control the tears.

When we lose our pets it is heartbreaking. Many don’t understand that losing our pets is like losing a human. It’s the bond that shapes the grief, not the number of years. Sometimes, we have a very special pet, and the loss is unbearable. It takes months, if not years, to ease the pain. Should it be any surprise that with such a strong bond, Mr. Jazz chooses to return to help his Mom in his after-life, and helps her make some life altering decisions.

At the end of the book, Deb shares some very helpful hints and links on how to deal with pet loss, tips that will help guide anyone through the painful loss of their special pet.

Any pet person should read this book as it is a very true accounting of the journey of love, life, death and beyond. Kudos to Deb. This is one awesome book that struck many chords at Paws for Reflection.

Have you ever been riddled in grief after losing a pet? Have you gone to immeasurable lengths to save your pet from the inevitable? Deb spearheaded Rainbow Bridge Day on August 28, 2015. She’s brought attention to grieving the loss of a pet as being a natural part of life. It isn’t just a cat, a dog, or a …. If you have experienced pet loss, please share your stories with Paws’ readers.