Feral Kitten thanks his Dad this Father’s Day

It’s more than Blake being the kitty’s dad, it’s the fact that he successfully wound his way into one of my neighbor’s hearts. She had become very attached to the feral cats, Blake and Faith. She fed them daily and made set up shelter for them underneath her porch. As feral cats, they wouldn’t come in, but they would let her get close enough to watch them. Turns out Faith was ready to give birth to a litter of kittens.

When Faith had her kittens, she didn’t leave them underneath the porch as was hoped. She took them to a field with a huge brush pile. She thought the kittens would be safer there. Why do cats like to hide their kittens? We wonder, and that will be a future blog post.

Lenny was the only kitten that survived. The rest had been unable to scurry up high enough in the brush pile and were left on the bottom. They drowned. At 2-weeks-old, Lenny was nursed back to health. He was bottle fed every 3 or 4 hours. He had an eye infection. He was taken to the vet to see if there was any permanent damage. Home remedies were applied. I became involved through Trap, Neuter, Return. My neighbor wanted these two feral cats spay, neutered. We’d been working on this before Lenny was even born, but had been unsuccessful. Lenny is thankful for that, this feral kitten thanks his Dad this Father’s Day for making for making his rescue possible.

I became enamored with this little kitten, and visited them weekly for a photo shoot. It was so fascinating to see him change every week. At first, it was bottle feeding. I had to make sure I got there by week 3 because he’d be weened soon. Then, there was the learning to play. He loved to play with her step grandson’s pink car. He was just so curious.

The adoption went through the local animal shelter. There was no question who would adopt him. As I had visited him weekly, it would only make sense that I would continue to chronicle his growth to being a full-grown cat.

We all have a lot to be thankful for, even though we may not realize it. Lenny will be 4-years-old in August. He’s brought me lots of joy, love, and laughs. He walks around on his hind legs like a Mere Cat. He jumps straight up, vertical. He always wants to play, somewhat to the annoyance of the other 4 cats. He gives deference to my Siamese Linus and Yellow, by letting them get their snuggle time in their human’s lap. Then, he stops by burying his head into my chest, for some TLC. He’s the softest, most loving cat. And unlike all the others, he has no interest in darting out the door. He looks at the other cats lounging on the deck. It’s like he knows what his beginnings were, and he knows he’s much safer on the inside.

This Father’s Day, we give thanks to Blake, and to my neighbor, for making such a wonderful addition to the Paws’ household possible. He, and all of my cats, have helped me learn the true meaning of giving unconditional love.

What are you giving thanks for this Father’s Day? Do you have a cat that has taught you a lot about the meaning of life? Please share your thoughts, stories and comments. 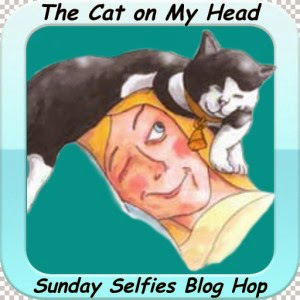