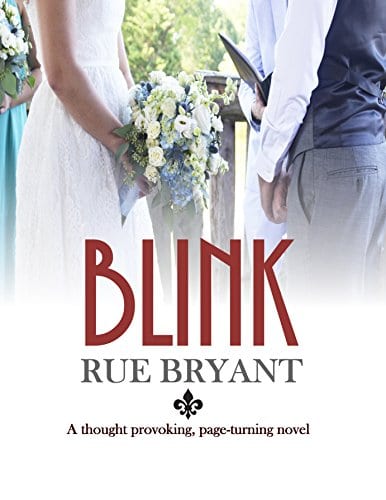 A pet’s unconditional life can transform your life, and author RUE BRYANT, AKA Stacey Ritz, incorporates this in Blink, a tale of how making choices at critical stages of your life can alter the face of your life, at least temporarily. After having dated Jordan Weiner for some 4 years, Casey Jane is ready to tie the knot. She had lived with Jordan for over a year, and was having major trepidations about their upcoming marriage. She had good reasons for having doubts.

Their year living together had been consumed by planning for their wedding. She was starting to see into the future, having a gut feeling that would dramatically unfold in their marriage. Her husband to be was controlling, work-centric, and all for show. Their relationship was a sham and only for show. There was no  fun or communication. Casey was losing her identity and individualism in a relationship without love.

Unlike her rebellious sister Trish, Casey was brought up to do what you were supposed to do. That led her to the story of her wedding day.

Blink diverges like a mystery with 2 different endings. We’ve seen these played out at the theater. In one scenario, Casey marries Jordan, to become Kitty Weiner. She loses not only her last name, but her first. She works in an unfulfilled job as a teacher. She has no close friends. She puts on a front for her parents.

Initially, she thinks she’s pregnant, but later finds she’s not. Perhaps that leads her to go through with the marriage, which goes from bad to worse. Jordan is so self-centered, he doesn’t bother to share the joy over a new baby with her. Instead he shares her pregnancy news with his parents, leaving her alone.

The fighting goes from bad to worse

In the other hand, like the blink of an eye, Casey runs from the wedding. She bucks up to her parents and doesn’t cave into their pleas to save face and go through get married because that’s what women are supposed to do. She doesn’t care about them being humiliated. Instead, she moves ahead with her life. She goes to live with her sister and her new husband Eddie in an RV. She takes on her old identify of YESA, a name her sister fondly called her when she was younger. She finds Lucky, a flea-ridden dog who becomes her best friend. She runs with him daily and takes up yoga. She starts a pet sitting business which becomes so successful, she can quit her teaching job. And she finds Travis, her soul mate.

Ironically, Kitty finds Travis in the last pages of the book, too, attesting to the fact that if the stars align, you’ll meet your soul mate, no matter what path you take. He also is walking with his dog, ironically named Lucky.

Stacey Ritz is the Executive Director and co-founder of Advocates 4 Animals, Inc. a 501(c)3 non-profit animal welfare organization, and the author of a number of non-fiction books, including her bestseller, Covered in Pet Fur. Paws did expect a more pet-centric book; however, it did make the point that no matter where you are in life, a pet will give you unconditional love.

We all face crossroads that change our lives forever

We all face a number of crossroads in our lives. While perhaps not as poignant as Casey’s choice to go through with her marriage or be a runaway bride, our decisions change our lives. They change our perspective on what is or what is not so important. They change our paradigm about life in general. If we had we taken a particular job, we would not have been able to have helped our parents.Or if we had moved to a different location, we would not have crossed paths with some of the people who have become important in our lives. If we had done things differently, we may have missed out on a terrific opportunity that came our way. If we had made different choices, we definitely would not be who we are today. For Paws, that means writing and blogging about cats, my true passion in life.

Have you come to some crossroads that have changed your life? What has led you to become the person that you are today. Please share your stories, and we’ll round them up in a future post to talk about how crossroads have led you into a world of cats.

Murder at the No-Kill Animal Shelter full of mysterious twists