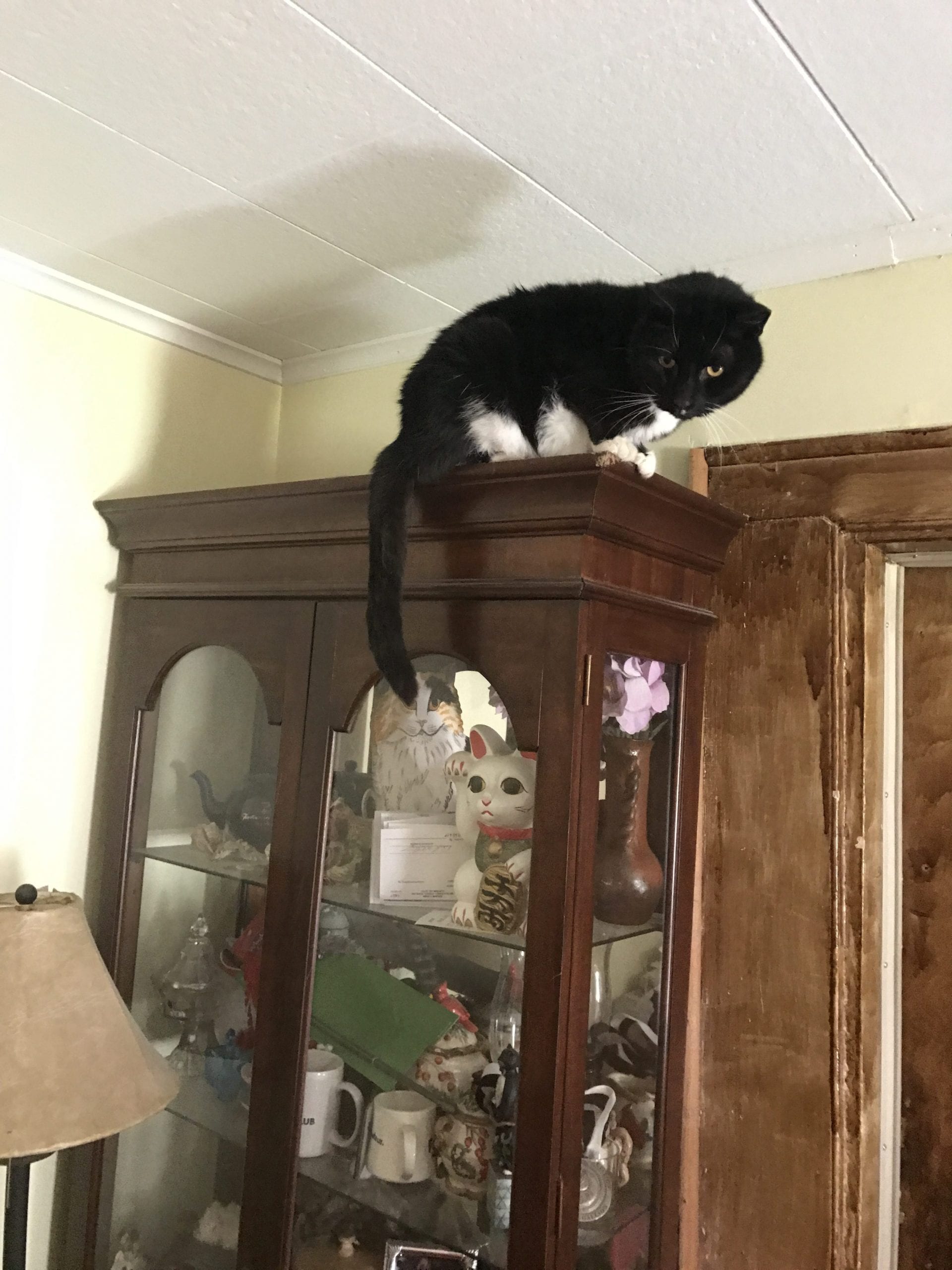 Clyde can still jump and play despite being 19-years-of-age. He what they call a geriatric cat as he is over 15.

The International Cat Care organization points out in recent years, feline ages and life-stages have been redefined. Cats are considered to be elderly once they reach 11 years with senior cats defined as those aged between 11-14 years and geriatric cats 15 years and upwards.

Keep in mind, Clyde is, and always has been, a scaredey cat, and in the past year, it’s gotten worse as the two youngest cats chase him when they see him. As Clyde’s human could not stand him hiding in the closet, Paws set up a nice setting, complete with a whole second floor to himself. The benefit, he gets to snuggle with his human ever night, and Lenny and Little Yellow have the downstairs where they cannot terrorize him. The other two cats, Pink Collar and Siamese Linus aren’t a threat, so they can go either upstairs or down.

While Clyde spends most of his time sleeping and is starting to look like a geriatric cat, the Paws gang hears him running and playing in the middle of the night. But it’s less and less frequently.

This handsome tuxedo boy has started to yawl when he hears my car drive into the driveway, and wants me to coax him downstairs for some extra TLC and a little it of wet food. Needless to say, Paws was shocked, even stupefied, to see he had scaled the glass cabinet in the living room a few weeks ago. As pictured above, he was back in one of his favorite haunts. He had managed to jump some three to four feet off a plastic storage container sitting on a wooden chair to the top of the cabinet, almost to the ceiling.

Another time, I had taken seat in front of the computer and left him in the living room. When I finished the project at hand, I could not find him. I knew I hadn’t put him upstairs – but had I? I looked and looked, and was saying ‘What is he’? Low and behold, I found him hiding in the towels in the bathroom cupboard. He had managed to find the courage to across the living room, through the kitchen, and to the far end of the bathroom. This had been his once favorite hiding place. I concluded it was okay to let him hang out for a while. About an hour or so later, Paws heard a scramble and cats yowling. I knew Lenny was terrorizing Clyde and ran to his rescue. He was quickly scooped up and put safely in the hallway leading to the upstairs. No more fighting.

As Paws writes about Clyde, we’re not so sure about his future. His kidneys are basically gone. Only one has some functioning ability. He has lost weight, and developed a very low hoarse cough, which is very worrisome. When Paws took him into the vet in February, the ultrasound and blood tests showed all the bad news. He eats ok, but he’s starting to look like his health is going downhill. When he urinates, it’s a lot. The cough is the most recent change, and we plan to have it checked out this week.

Clyde is an analogy for me. Don’t get me wrong, he’s a sweet cat, and he does want attention on his terms. He was Mom’s cat, and he’s always been a scaredey cat, afraid of his own shadow. When he was younger, he would do the darnedest things, like glide 10 to 12 feet from the kitchen door to the top of the boxed TV When he and Mom stayed with me in my condo several years ago, he would always hide above the kitchen cabinets.

Clyde was adopted after Paws decided to keep Pink Collar. Read more in my post, Black Cats Rock My World. My Mom fell in love with him, but as much as Paws loves cats, we had to seriously consider whether he would adapt to living with us. We had no idea of what his past may have been, but we found out it probably was not good. He was terrorized when he came into our house, with dry heaves and panic. That was Christmas Eve. Paws will share more of how Clyde came into our lives later this week.

We have missed our friends at the Sunday Selfie, hosted by The Cat on My Head. Not only did we have significant issues when migrating our WordPress website (we were given incomplete information), we also encountered a nightmare when trying to change themes. That put us out of commission for close to six weeks. We returned to our old theme, and will struggle with leaning a frame based system or seek out another theme option in the future, but only if we can do it off-line. At this time, we want to spend our limited time towards video. Check out Friday afternoon’s project, Cat Test Video.

Do you have experience with geriatric cats? Do you do something special for them to make their lives better? Why do you suppose younger cats want to pick on the elderly felines? Please weigh in and share your comments.

Visit all the Sunday Selfie blog hoppers. You’ll meet some great bloggers and their pawsome pets!