Meet the cats: Tuxedo Boy Clyde, a delightful tuxedo boy, who is now in his twilight years, is Mom’s cat, and if she were still with us, she’d be 90-years-old today.

As written in Meet the Cats: Pink Collar, Paws was going to give her to my Mom, who had lost her Calico cat Sam over a year ago. She was on the fence about replacing her, so I decided I had to take this into my own hands. While she did go out occasionally with friends and family, it didn’t replace the constant companionship of a cat. My Dad had passed on five years before, and she still missed him. (We never really get over those we lose).

When I came home for Christmas of 2001, we went to the local shelter. They didn’t have a ton of cats. I found this little tortoiseshell kitten that I absolutely loved; however, she wanted no part of that kitten. She said that kitten likes, you, not me, and I think she was right.

This post is part of the Sunday Selfie Blog Hop, sponsored by The Cat on My Head. 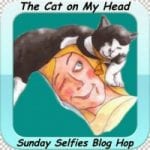 She was taken by this black and white tuxedo boy with bright yellow eyes.  He seemed shy and was a bit of a scaredy cat. He’d been at the shelter for quite awhile. That was her pick, and we filled out the adoption papers. Surprisingly, maybe because of Christmas, the cat was packed up in a box crate and sent home with us. As I look back, we hadn’t planned to bring home a cat that day, so we hadn’t put out any food or even the cat box. We’d do that immediately upon getting home.

He was named Claudio, and my Mom couldn’t really get that name. I can’t say that I could either. On the way home, over the cries of the timid kitty in the crate, we mulled over what his new name would be. It would be Clyde, much easier to say that Claudio, and we could nickname him Clydee. There;s just something about kitty names that end in ‘ee’.

That was 17-years-ago and I admit I didn’t have the knowledge that I now have about cats. I did know you should keep cats isolated from other cats, but as there was no other cat in Mom’s house, we didn’t figure we had anything to worry about.

When we got home, our excitement led us to immediately let Clyde out of the cardboard box. He flipped. We should have immediately taken him to a place where there was a little box, but not thinking, we let him out in the living room. He had a little accident, and flipped. He was absolutely terrified (like no other cat I’ve seen before or after).

The poor kitty developed dry heaves. He was running around the living room and throwing up everywhere. When he couldn’t throw up anymore, he went into the dry heaves. It was awful and scary.

I immediately set up the litter box, trying to show him where it was. We immediately filled the food and water bowl. We were both stunned. Would he calm down? Had we made a terrible mistake?

This was Christmas Eve 2000. I thought will we have to return this cat to the shelter?

On Christmas, my sister had invited Mom and me to have dinner with her husband’s brother. Poor Clyde was still terrified. He still had dry heaves. He wasn’t eating any food.

I had to leave that afternoon to return to southern Maine for my job. Lucky to get Christmas Eve off, and that meant more than Christmas Day, anyways. Gone were the days when we celebrated with tons of gifts. It was usually one gift for each of us.

I was really leery about this terrified cat. I felt so bad for him. Mom didn’t know what to do, and this wasn’t the experience either of us wanted in getting her a new cat.

After dinner, I stopped by the house (Mom had stayed with my sister, Karen). Clyde seemed to have calmed down a bit. He was napping and while nervous, did not seem terrified. I gave him some loving pets, assuring him he’d be happy in his new home.

I felt more assured that we would not have to return him to the shelter, but was not totally 100 percent sure. The next day, I called Mom, and well Clyde was now checking out her lap, and had found her bed. He was still very skiddish, but the dry heaves were gone.

It was an amazing lesson on making sure you are ready to introduce your cat to your new home. While he only had access to four rooms, he may have done better if the litter box and food bowl had been placed directly in the living room. We can only speculate.

Clyde is timid and skiddish, and he’s always been that way. He’s Mom’s cat, but now he’s my cat. Her Alzheimer’s progressed to the point where there was no choice but to have her go into Residential Care. That was in November of 2009. I didn’t know how Clyde would fare without her, but he’s done well. She passed on December 22, 2013, and I thought maybe Clyde would follow her to the Rainbow Bridge. He did not.

He is now a geriatric cat, and has kidney issues. He is losing weight, and he will soon be joining my Mom. I’m not sure when the day will be, but it is coming.

Clyde gets the best care

Clyde is not my favorite cat, but when it comes to taking care of him, he gets the best. He now lives upstairs, away from the two that pick on him. He cries to come down when he hears me, and I coax him to come downstairs for a little special wet food. He likes to hang out on the couch for a little TLC. He also gets to sleep in my bed with Pink Collar and my Siamese, neither who seem to mind his company.

When we adopted Clyde, he was not neutered, and he did exhibit the behaviors of going into that first heat – the yowling, running back and forth from one end of the house to the other – before we could get him fixed. He would jump from the kitchen doorway, probably 15 feet to the top of the TV.

Mom always said he was abandoned on Farmington’s Perham Street. I don’t really recall the shelter saying that, but I do know he was abandoned. They said he was probably between one and three years of ago. He was definitely older than my six-month-old Pink Collar, so I’ve always guessed he was closer to two or three. That makes him about 19 now.

It was an eventful Christmas, and one I’ll never forget. She loved Clyde, and he had a good home. In the end, that’s what matters. But I wish I’d know more about cats back then because it might have made his transition a bit easier.

Do you have a cat adoption story that almost went array? Have you ever had a cat so scared, he went into dry heaves? Please share your stories and weigh in on the discussion. Paws has disconnected one of our plug-ins, and we hope you leave a comment to be sure they are working again.