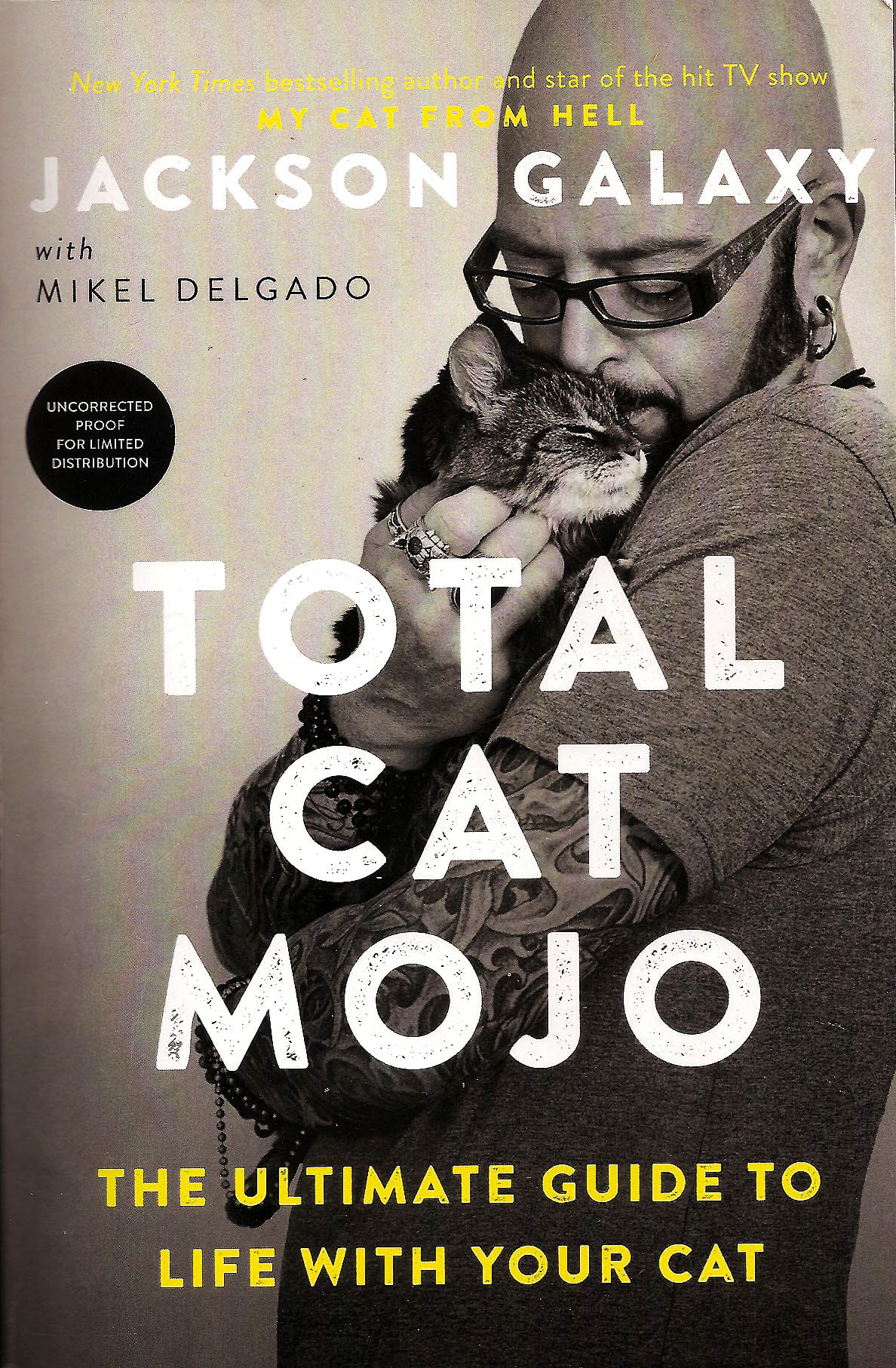 Jackson Galaxy’s ‘Total Cat Mojo’ is The Ultimate Guide to Life with your Cat.  The 300-plus page book is the best explanation Paws for Reflection has seen to why cats behave the way they do. With the recent release of ‘Total Cat Mojo’ Jackson Galaxy is now on a 10-city tour from New York City to Portland, Ore, and Paws for Reflection can only imagine how awesome these speaking engagements are.

For those that don’t know Jackson, he’s the star of the hit TV Animal Planet Show, ‘My Cat From Hell’. Even before becoming a TV personality, Jackson spent years working in the shelter system, learning about cats, their behavior and what makes them tick. On the show, he talks a lot about cat mojo.

Paws for Reflection received a complimentary copy of Jackson Galaxy’s ‘Total Cat Mojo, the Ultimate Guide to  Life With Your Cat’ to review, and we are so happy we did as we plan to keep this book around for a long time to use a s a reference to help us better understand our cats and what makes them tick.

With the assistance of Mikel Delgado, co-owner of Feline Minds, a San Francisco Bay area-based cat behavior consulting business, he has come up with a homerun book about cats. Delgado is currently working on her doctorate in psychology at the University of California at Berkeley, studying animal behavior and human-animal relationships.

Cat Mojo means the confidence that cats exhibit when they are at ease in their environment and in touch with their natural instincts: to hung, catch, kill, eat, groom, and sleep.

Jackson dismisses the notion of the alpha cat. Rather he talks about the 3 different personality types for cats:

As we look at the title of this book, we think, what exactly is cat mojo. Jackson describes it perfectly on a speaking engagement to a very enthusiastic audience in Buenos Aires, Argentina. For those of us that remember the John Travolta, aka, toy Manero in Saturday Night Fever, he notes he was on the top of his dancing game and he knew it. He may have been carrying a can of paint, he had swagger and he exuded it in his hometown turf, Brooklyn. Brooklyn was his territory. Need we say more.

The same goes for cats. Cat Mojo really means the feeling of confident ownership of territory.

To be a good cat parent, we need to understand Cat Mojo. Cats need to have confident ownership of territory, and it is us up to us to make the modifications needed, whether through developing vertical space or walling off the ‘underlings’, caves, where they can hide.

We humans also need to understand cats, and where they came from because the genetics of being a hunter are still hard-wired in our sweet puddy cats that snuggle up to us.

That’s right, cat mojo means understanding our cats, and Jackson does one of the best jobs Paws for Reflection has seen in pulling it all together. That’s no easy task considering cats are not the easiest beings to understand.

Number one, cats are misunderstood. While they are solitary hunters, they like company. That is testified by the big cats living in prides in the wild, and the feral cats living in clowders. Cats seek the company of others. They hunt by themselves, but live in groups.

They developed a relationship with humans out of the need for food, and the need for humans to get rid of rodents that were destroying the human’s food supply.

He goes through the evolution of cats, cat anatomy, communication, personality types, and even clicker training. He talks about introducing cats to new cats, dogs, and babies. One thing, we learn upfront and center, is cats are not motivated by pleasing humans, they are totally motivated by food.

That doesn’t mean they don’t love their humans or other cats in the household, but their motivation is 100 percent food. That’s why he is not an advocate of free-range feeding (leaving food out at all times) because a hungry cat is a motivated cat.

To get to Cat Mojo, we, humans need to provide an environment full of the Three R’s:

Paws is always amazed at what we learn when reading cat books, but Jackson’s ‘Total Cat Mojo’ took this a step further and we will be following up with a post next week about 10 things we learned from reading this latest book.

For one let’s talk about ‘The Energetic Balloon’. Cats spend hours sleeping, collecting energy for the hunt. While interacting with our cats, we are either putting energy in, filling the balloon, or taking energy out as a safety valve.

Just as the human days is full of routines – getting up, making breakfast, getting ready for work, kids going to school, cats, also have their routes. When us humans get up its energy in. We leave the house with an energized cat. We humans need to provide an environment where the balloon can self-regulate and let some air out. They need playtime, a structured activity where you provide a mind-body focus that exhausts your cat. You need to provide an activity that your cat is 100 percent engrossed in.

That’s only one of a whole host of suggestions in the Cat Daddy’s Tips and Guides laced throughout the book. He addresses questions from But My Cat Doesn’t Play to The Cat Daddy Guide to Types of Cat Toys. He even has a Cat Nerd Corner, and a Destination: Jackpot.

Jackson incorporates his previous books in a whole section about Catification and Territory, the Cat Sundial (where cats follow the patterns of the sun throughout the home) to providing Cat TV by strategically places bird and squirrel feeders outside your windows for kitties to watch. He even talks about developing a Mojo Map, a blueprint of where your cat spends time, and where he may timeshare with other cats.

Cats share territory. One cat may occupy the window in the morning, and another in the afternoon. Jackson says all we can hope for in a multi-cat household in peaceful co-existence. If they are friends, that’s great, but if they can exist without war, that’s what we should strive for.

With Cat Mojo, Jackson even discusses a topic near and dear to Paws – how cats that were once the best friends are no longer even friends. Something changes that makes one want to no longer peacefully co-exist. My Lenny and Siamese Linus would play for hours. About a year ago, the play became more like war, and we are trying to mojo-fy Linus so he doesn’t run and become the hunted.

At Paws, we recommend all cat people, and even no so much cat people, not just read Jackson Galaxy’s ‘Total Cat Mojo, The Ultimate Guide to Life With Your Cat’, but also keep it as a reference guide. It helps us humans better understand our cats and what makes them tick. Complete with drawings showing a happy cat’s tail position to cat scratching posts strategically placed where cats want to make territory to litter box placement, this book is a must read, and hits the cat info ball way out of the park. The book is available at Jackson’s website, Amazon, and major book retailers.

Did you know about the energy balloon? Did you know cats co-mingle their scent with their humans and other feline family members to mark territory? Did you know what Cat Mojo means? Have you ever had cats that got along like best friends now fight on a regular basis? Those are just a few things Paws learned from Jackson Galaxy’s new book, and we’d love to hear what you have to say, whether you’ve read the book or not.

Murder at the No-Kill Animal Shelter full of mysterious twists

Must-have gifts for your cat-obsessed friends