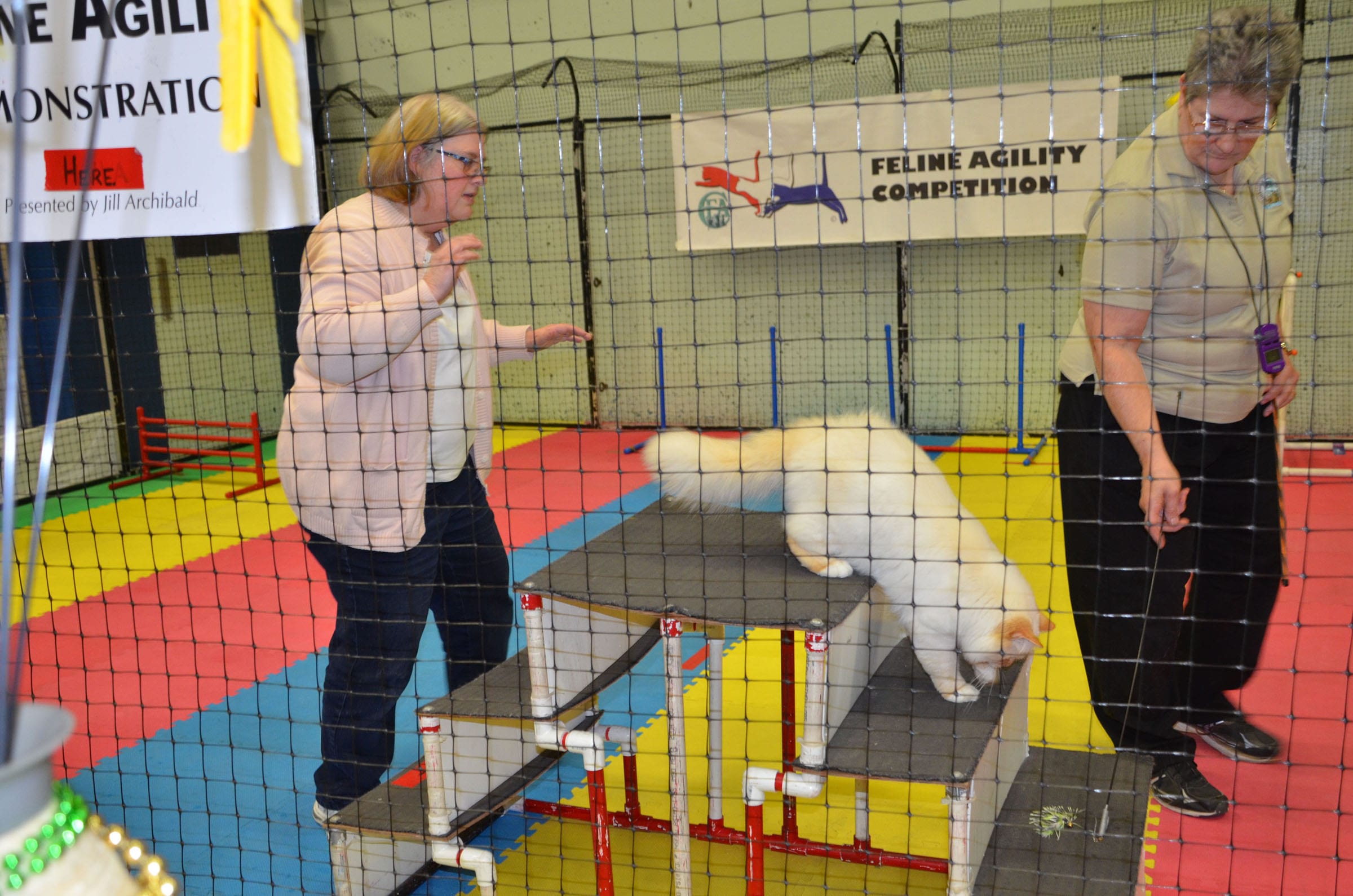 Can cats do tricks? Feline agility competitions prove they can. Paws was pretty amazed when we saw how easy it is to train cats to maneuver an obstacle course, complete with jumps, stairs, tunnels and weave poles. We weren’t the only one that were befuddled at how masterful the cats could be, and how fast they could master the course.

We encountered Jill Archibald’s Feline Agility Competition at the annual Seacoast Cat Club’s Cat Fancier Association (CFA) Cat Show in Concord, NH, some time ago, and we were mesmerized by what we saw. Others walking by were stopped in their tracks as well. They’d point at the cats, and ask their significant other, kids or friends, if they thought one of their cats would do this.

Can cats do tricks?

There’s nothing like a cat show to get people talking about their cats, and the agility competition was no different. ‘I thought only dogs could do that,’ exclaimed Phil Salvatoriello who runs B+B=Best Buddy Animal Care Service in Hanover, NH. ‘I’d never seen anything like this till last year. I never would have dreamed cats could do this.’

Can cats do tricks? That thought lead to lots of OH’s and ah’s heard time and time again as spectators gathered around the ring each time a cat was running the feline agility competition, whether actually competing, or a spectator leaning how it was done.

There’s just something about cats that is fascinating, and each time Paws goes to a cat show, we learn something new. We ponder how much there is to know about cats. We found spectator Joanne Chouimard, of Bedford, NH, agreeing, saying, ‘I’m fascinated by cats. It’s like you can read their mind by looking into their eyes, and looking at their facial expression.’

As a trainer, Archibald was not entering her 3 cats: Timothy, a 5-month-old Japanese Bobtail; and her Silver Egyptian Mau’s Muffin Man and Ice Cube in the competition. ‘While there aren’t any rules against it. I don’t think it would be fare.’ she said.

Archibald has been competing since 1996. As the CFA (Cat Fancier’s Association) Agility Course Coordinator, she can tell how well a cat will do by reading their body language. She finds spectators are fascinated by the fact you can train cats, and she lets spectators get a feel for feline agility by trying the course with her cats. Each person is given five-minutes of get-to-know and trust you time between this ‘unfamiliar’ human and the cat.

The felines won’t interact if they don’t feel safe. That’s why she has spectator competitors spend about 5 minutes socializing with one of her cats. You have to be patient and wait for the cat to respond to you. Why should that be a surprise, as cats are cats.  Feathers or fishing lures on the end of poles to entice the cats to perform.

As we were watching the cats compete, we encountered Jen Burton, Nottingham, NH, who went to her first cat show in Dover, NH, some 15 years ago. It’s amazing to see the cats perform in person. rather than see it in a book or on the Internet. They say it’s all about having the right toy, but my cat certainly wouldn’t go through that hoop.

Paws had to agree, as we weren’t so sure our feline family would go for this, but we couldn’t wait to get our paws into the Feline Agility Competition, and try it out first hand. We selected the youngster Timmy, who knew the course quite well. Even so, Archibald said without the proper handling, he would not cooperate. She explained how to position to feather, drag it, and entice the cat into action. After a couple of practice runs, Timmy was off and running.

Kittens can’t weave, so they must be enticed to cross the weave line at a diagonal angle, cross back, and so forth. She also pointed out you should never bang the wand, but always move it back and forth. All this coaching paid off as the finish time was 00:36:99.

We were thrilled at having a chance to not just watch, but also compete. As Paws spends a fair amount of time playing with the kitties, it was easy to tune into what would make Timmy want to push through the agility course. We also were lucky to have someone has skillful as Jill teaching us the ropes. She explained we needed to be quick and precise for the kitty to understand where he should go. With practice, it got a bit easier.

Additionally, we found out you can actually purchase feline agility training equipment for your own house, and practice. Keep in mind, it will take patience and repetition for your kitty to get the hang of all this new stuff, but chances are both you and the kitties will have an absolute blast.

Have you ever tried to train your cat to do something maybe he didn’t want to do? Have you ever participated in a Cat Feline Competition? It was so fun, and we’d definitely do it again. Please weigh in on this fun discussion, and share your comments.