Early spay/neuter will stop explosive cat overpopulation. There’s no doubt too many cats can come from one cat.

Explosive overpopulation among cats is a huge problem, so much so that some animal advocacy organizations call it a national crisis, a crisis that could be averted by having your pet spayed or neutered. While early spay/neuter may not be a hit cat video on the Internet, it should be, because it’s the one thing we humans can help control by early spay/neuter.

But why is early spay/neuter the one effective tool to reduce the huge cat overpopulation issue? Stephanie Heikkinen DMV, of Maine Wood Mobile Vet, Livermore Falls, Maine, explains cats are particularly hard-wired to reproduce.  A cat can have a litter of kittens two to three times a year with up to six kittens in each litter, resulting in quite a few extra kittens. Each kitten can have a litter at six months. The results are exponential cat overpopulation with one cat having an average of 2.8 kittens per litter. The controversial cat overpopulation chart, while known to overstate the problem, does illustrate how big the problem is.

According to the ASPCA website, an estimated 5 million to 7 million companion animals enter animal shelters nationwide every year, and approximately 3 to 4 million are euthanized (60 percent of dogs and 70 percent of cats). Shelter intakes are about evenly divided between those animals relinquished by owners and those picked up by animal control. These are national estimates; the percentage euthanized may vary from state to state.

The numbers are getting better. One reason is that shelters almost always spay/neuter cats and kittens before they are adopted out. Juvenile spay/neuter, as early as eight weeks has helped curb so many kittens being born. Paws is appalled when we overhear people talking in disgust about their female cat (kept inside) who is going into heat. They keep yowling, scratching and clawing at the door. Keeping kitty inside is not going to stop the hard-wired need to get pregnant. People don’t realize it’s not about the sex, it’s about reproducing.

People also say they keep their dog hitched, but that doesn’t mean some strolling male cannot find her, resulting in a litter of pups. Heikkinen said shelters are reporting more mixed breeds of large dogs. However, for the most part, she said dogs are more contained and considered more valuable than cats. People figure they have to feed multiple puppies. That’s not always the case with cats.

At Alley Cat Allies,  they explain spaying and neutering is important because:

• No new kittens are born
• It improves the cat’s health
• Changes of mammary and testicular tumors are virtually eliminated
• Female cats or dogs don’t go through the constant strain of pregnancy
• Mating behaviors—like spraying, yowling, and fighting 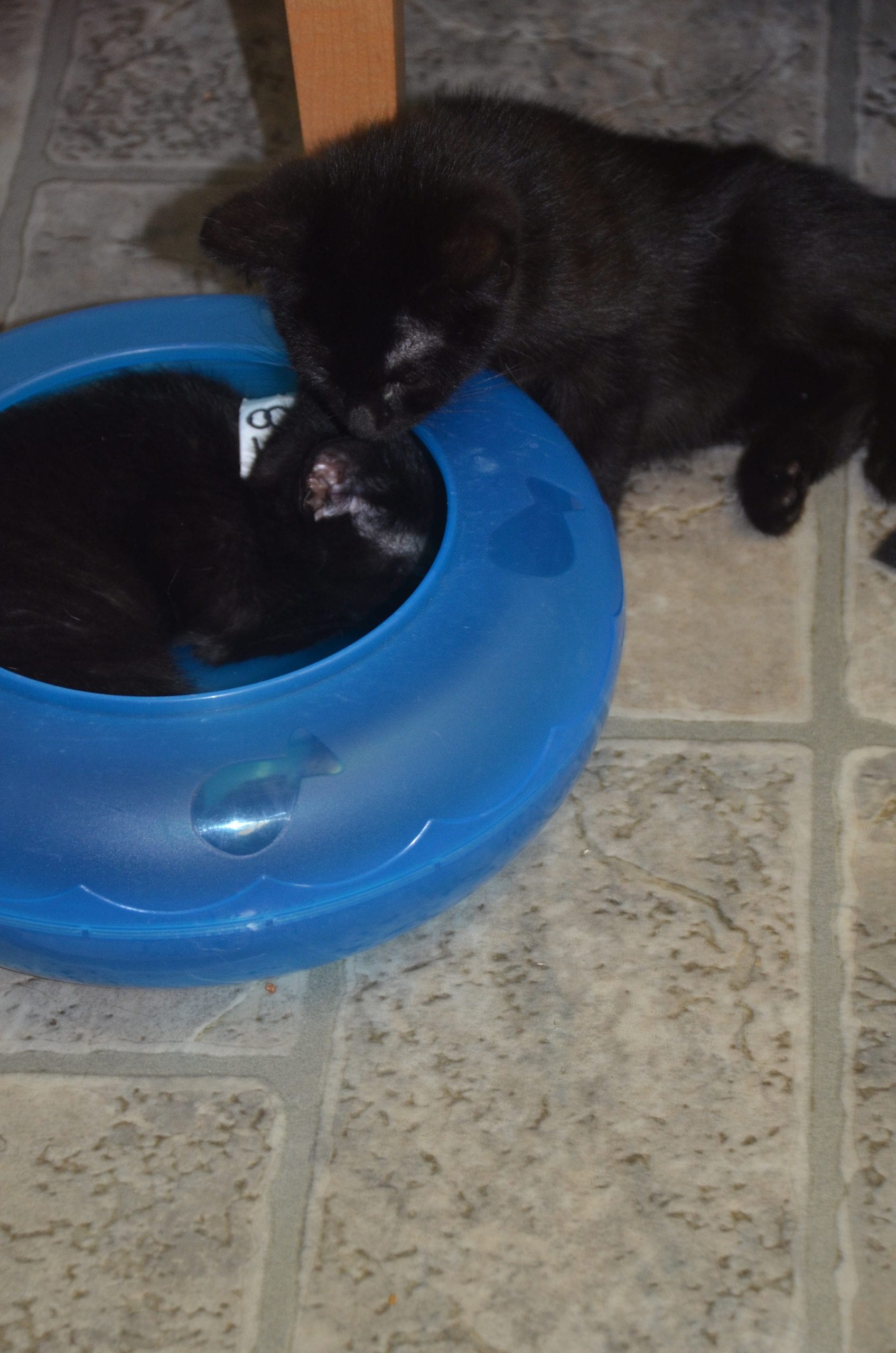 ‘Even young cats who have been in heat only once have a significantly higher risk of developing mammary cancer.’ The same benefits apply to outdoor feral cats. It improves and lengthens their lives.

Health benefits of early spay/neuter are also cited by Feline Fix by Five. They say 85 percent of kittens come from Tweens having kittens. These Tweens are still kittens, and these kittens are having kittens. Having your kitty spay/neutered at three or four months old would drastically reduce the number of kittens in shelters.

Cats that are spayed before their first heat cycle have a 91 percent lower risk for developing mammary cancer, which kills an estimated 75,000 cats every year. Mechler adds, cats have a greater risk – by 1,500 times – of dying from mammary gland cancer than from contracting rabies.

Additional benefits of spaying and neutering include many positive behavioral changes, such as:

Some states are reporting very few, if not no, euthanasia due to cat overpopulation. Many states have adopted a no-kill strategy. And of course, there’s the whole issue of explosive cat overpopulation in the feral cat community. Trap, Neuter, Return (TNR) helps, but there’s still a lot of work that needs to be done.

Check out some of Paws posts on TNR.

Paws has written about explosive cat overpopulation extensively over the past several years. Check out some of the following blog posts, which focus on why early spay/neuter is so very important.

It isn’t just Paws for Reflection that focuses on the so very important issue of spay/neuter. Check out our Cat List of Holidays for 2018, and you’ll find February is jam packed with spay/neuter related issues for February. Why? February 2 marks the half way point between Winter and Spring. The sun is getting higher, the temperatures warmer, and cats will start going into heat.

For more on cat mating behaviors, you may want to check out these articles from our friends at Catster.com.

Fix your cats by five months 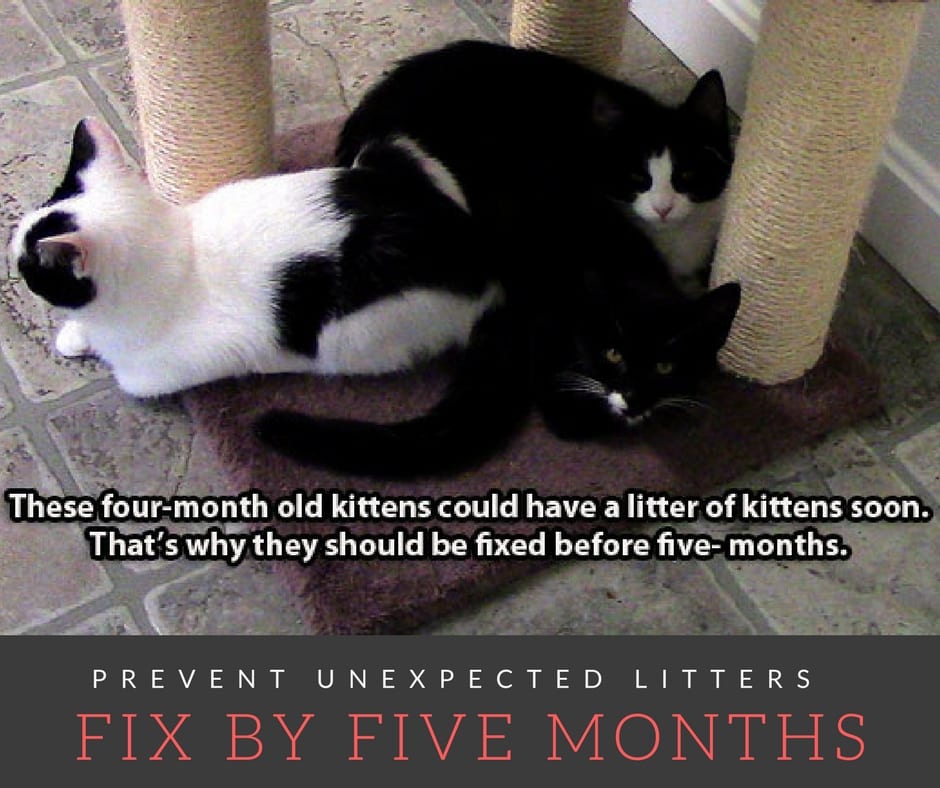 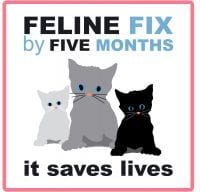 For the first time in recent history, there is a clear and consistent message for owners regarding when to fix their cats. In late 2016, representatives of the American Veterinary Medical Association, the American Association of Feline Practitioners, the Association of Shelter Veterinarians, and the American Animal Hospital Association, along with representatives of the Catalyst Council, the Cat Fanciers’ Association and The International Cat Association came to a consensus to take back to their respective organizations. By July 2017, the boards of all the veterinary organizations had officially endorsed the Feline Fix by Five initiative which advocates sterilization of cats before five months of age.

Following this recommendation to sterilize cats by five months of age will prevent enormous suffering because millions of unwanted kittens will no longer be born to a very uncertain fate. There are also clear health and behavior benefits of sterilization prior to first heat.

What was your biggest take-away from this blog post? What do you do to promote early spay/neuter to prevent so many unwanted cats? What do you think you can do to help curtail the explosive cat overpopulation problem? Please weigh in and share your comments.