Save Kittens – Support the KITTEN Bill. Kittens are routinely being killed. Tell the United States Department of Agriculture (USDA) to stop killing kittens for unnecessary and cruel experiments.

The bipartisan ‘Kittens in Traumatic Testing Ends Now’ (KITTEN) Act directs the USDA to develop a program to adopt out cats no longer needed in research and consult experts about phasing out the use of cats in research.

For decades, the USDA’s Research Service (ARS) has been breeding kittens, feeding them bad meet, testing their feces for Toxoplasma, and then euthanizing them. The worst part is we taxpayers are paying for this cruel and inhumane practice that dates back to the Nixon years.

Save Kittens – Support the KITTEN Bill

Rep. Mike Bishop (R- MI) and Rep. Jimmy Panetta (D-CA) have introduced the ‘KITTEN” Bill, which directs the USDA to ‘end the use of cats in experiments that cause pain or stress’.

In supporting the bill, Rep. Bishop says he is proud to introduce the KITTEN Bill. Constituents and Americans all over the country have stood up to say they don’t want their hard-earned tax dollars to abuse and kill cats in cruel, inhumane and outdated experiments.

A taxpayer watch dog group, White Coast Waste Project, uncovered the practice of a USDA Lab in Maryland breeding up to 100 kittens a year. Once the kittens reach two-months-old, they are given Toxoplasma or infected red meat. Then, researchers collect their feces for several weeks to harvest the parasite that causes Toxoplasmosis, an illness that can affect humans with compromised immune systems and unborn children infected in the womb. The kittens are then killed and incinerated before they are three-months-old.

The Toxaplasmosis parasite causing Toxoplasmosis is only excreted in cat feces, which is why cats are used in the research. However, other research indicates the illness comes from undercooked red meat, not just cats.

The USDA contends cats fed toxoplasma-infected tissues usually don’t become sick. (Wouldn’t we want more information about this and not just kill the cats?) That lead Rep. Bishop to start asking questions, like why the kittens are killed since they typically don’t get sick.

Toxaplasmosis has been a lightening rod of controversy with cats. It is recommended that pregnant women and those with compromised immune systems avoid cleaning the litter box, as it is only through cat feces that one can contract the disease. However, it is believed the disease is more commonly transmitted through eating under-cooked red meat.

There is tons of research stating it is clear people don’t get the disease through direct contact with the cats. There’s a host of misinformation and controversy including the ‘my cat is making me crazy’ and they use everyone to debunk these false myths. 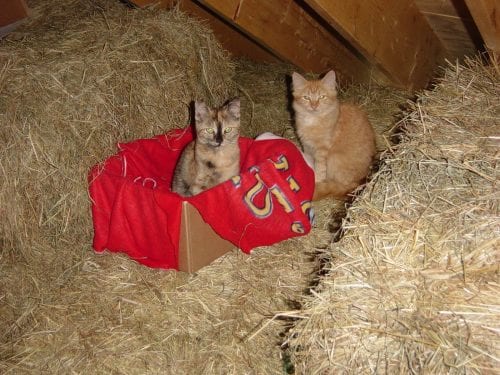 Let’s take a closer look at the disease. The disease is caused by the parasite Toxoplasma gondii, which can be found in garden soil and raw meat. Cats can get it by killing and eating infected prey. Once a cat is infected, the parasite multiplies in his intestines until immature eggs called oocysts are shed in the feces. Infected cats can shed oocysts up to two weeks after the initial infection.

Most cats become immune to the parasite. Those not already immune may develop mild diarrhea or loss of appetite. The disease can also affect the lungs, liver and nervous system. Unborn kittens are most vulnerable to contract the disease.

While antibodies can clear up the symptoms, they don’t kill the parasite.

The disease can impact unborn children, who can develop mental retardation, seizures and blindness. A World Health Organization panel has estimated Toxaplasmosis has infected more than 10 million people globally They further say adopting these cats could undermine the goal of reducing the spread of Toxaplasmosis. (One would think that after 30 years, we could determine whether the parasite disappeared from the feces, and not just use the kittens to produce the parasite.)

While Rep. Bishop supports making food safer and protecting both human and animals from infectious diseases, he writes that this research creates life to destroy life, and ‘we must ensure taxpayer dollars are used effectively, efficiently, and humanely.’ he urges people to save kittens – support the KITTEN Bill.

Rep Panetta has said, ‘This common sense, bipartisan bill will require the USDA to adhere to the same animal welfare standards that the department is charged to withhold. ‘While I strongly support scientific research, taxpayer money and federal resources should be spent on advancing scientific research in an ethical manner, not on inflicting pain on innocent kittens in outdated experiments. I hope this bill gets us closer to ending the cruel practice.’

Kittens are being used as test tubes

The White Coast Waste Project obtained documents about the research at the USDA Animal Parasidic Disease Laboratory in Beltsville, MD, through the Freedom of Information Act. Parasidic eggs are produced in the kittens’ feces, but Rep. Bishop maintains the kittens are being used as test tubes, and there are more humane ways to produce the eggs. He also contends the kittens are being used as disposable text tubes in harmful experiments that most taxpayers oppose.

Save Kittens – Support the KITTEN BIll. This cruel and outdated research has been going on for some 30 years. For the past year and more, Rep. bishop has been investigating and calling for reforms in the use of cats and dogs in government research labs, being part of a successful bipartisan effort to cut funding for painful and unproductive experiments on dogs at the Department of Veteran Affairs.

Maryland recently passed the ‘Beagle Freedom Bill’ requesting all labs to work with willing animal rescue organizations to find homes for pets once they are no longer needed for research. The bill also protects cats. As it will take some time for this law to go into effect. Rep. Bishop says the kittens need help today.

Save Kittens – Support the KITTEN Bill

He uses people to tell Congress to pass the bipartisan KITTEN Act and adopt out the cats. A Care 2 Petition is online to support the bill to stop killing the kittens and re-home them.

Steve Dale Talks about the Status of Cats in 2017

Do you think it makes sense to feed cats raw meat giving them Toxoplasmosis and then killing them? More research should be done on why the parasite is spread in cat feces, and not just using them as test tubes to grow the parasite.  Please weigh in, and also sign the petition supporting the KITTEN Bill. We credit Rep. Bishop with his efforts to be more humane when it comes to using animals in research.