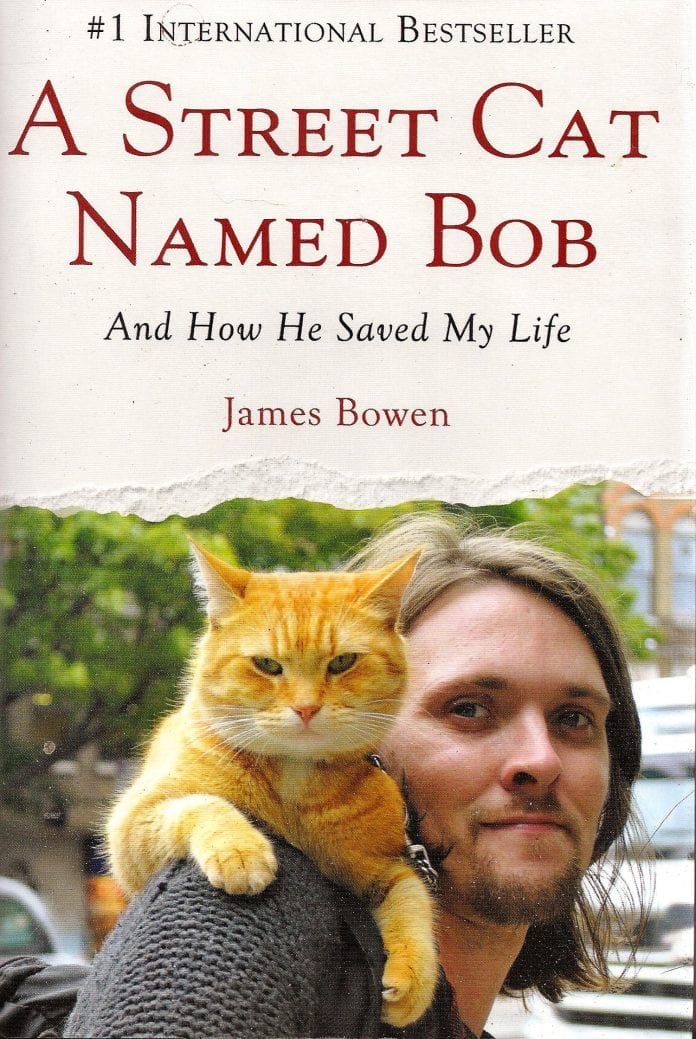 A Street Cat Named Bob will live on even though he died on June 15, 2020, at the age of 14. His story of how he saved his owner’s life will continue to resonate with those that read one of his books, watch the TV production, and follow his story.

A cat saved my life? That’s what James Bowen recounts in this true story as told in ‘A Street Cat Named Bob, And How He Saved My Life’, the first in a series that became a British blockbuster best-seller, and was aired on Public Television. Bowen tells how this special cat lifted him out from the Dredges of drug addiction, mended his ties with his broken family relationships, and lifted his self-esteem so he could go from being a bum playing guitar on the streets to a person that wanted to become a self-respecting citizen.

A Street Cat Named Bob will live on

As in so many cat rescue human tales, the cat finds James, not the other way around. James comes home to his small barren apartment that he had been put up in as part of his drug recovery efforts. James is a recovering heroin addict, and on methadone to keep him clean. This Ginger cat is hanging around on the stairway. Initially, James thinks it’s someone else’s cat. Then, his friend, a former girlfriend who struggles with her own drug demons, convinces him to take in the cat.

Bob gives his owner a reason for living

A Street Cat Named Bob will live on because Bob is more than just any cat. He become a central part of James’ life, giving him purpose.

It’s an incredible story, and we can just picture Bob sitting on the bus next to James with his face glued to the glass taking in all the surroundings of the huge London cityscape. James can barely afford to take care of himself, with very few earnings playing guitar on the street. But once he takes Bob to the place he is playing, there’s a transformation. People take notice. James is no longer an invisible person. He becomes visible because people stop to look, listen, and throw some change at the person with the cat.

His true story is one of many testimonials of how strong the bond can be between humans and their cats. Check out other posts Paws has written on this very topic.

Cats are good for us – for our mental and physical health

Becoming visible is key to James’ recovery. If it hadn’t been for the Ginger Kitty Bob, people would have continued to pass by and not notice, just one more person playing guitar for a few schillings.

It isn’t James’ intent to take Bob out to where he works. It turns out one day, Bob decides to follow him down London’s busy streets. James’ finds a string and makes a make-shift harness. When he gets enough money, he invests in a second-hand harness. He takes him to the low-cost clinic for spay/neuter.

As we read a number of books that testify to the incredible depth of the human-animal connection, particularly the cat-human bond, we are struck by how taking care of a cat, nurturing them back to good health, and being responsible for their well-being acts as a catalyst for change for the better. It is proven to reduce depression, anxiety, and boost self-esteem.

James had dealt with abandonment issues his whole life. He didn’t fit in (how many of us can relate to that?) This special Ginger kitty gave him a purpose. He was responsible for the cat’s well-being. Cats give us unconditional love and that helps give us a reason for being.

We are also struck with how many times when Bob goes missing, for even a short time, James ponders whether the cat has abandoned him.

Towards the end of the book, James is so convinced Bob has deserted him and gone lost that he is dying for a fix. That thought quickly is gone once he finds Bob.

Not once does James consider abandoning the cat, but he does question whether he is good enough for the cat.

An amazing story that will live on

This bond becomes so strong, and elevates James’ self-worth to the point where he goes off methadone, at home with the cat, despite warnings not to do it alone. We cry out for James as he details the pain, the hallucinations of withdrawal, but all the while, Bob is right there with him. He may wander away to sleep by the heater, but he is there. His presence helps James get through the ordeal.

We also witness how Bob helps him gain enough self-respect to want to reconnect with his mother, step-dad and dad, all of whom he had disconnected with due to the drugs.

Here we talk about Bowen’s first book, ‘A Street Cat Named Bob’, published in 2012 by Hodder & Stoughton published Bowen’s first book, The book, along with its sequels “The World According to Bob,” “A Gift From Bob” and “The Little Book of Bob,” became global bestsellers, selling eight million copies in more than 40 languages.

A film ‘A Street Cat Named Bob,’ based on the first book, and directed by Roger Spottiswoode (‘Tomorrow Never Dies’), released in 2016 and collected more than $16 million. Luke Treadaway starred as Bowen, with Bob playing himself. A sequel, ‘A Gift from Bob,’ directed by Charles Martin Smith (‘Dolphin Tale’) is in post-production and hopefully will air in late 2020 or 2021.

When Bowen was in the throes of drug addiction, he most likely never dreamed that he would become a best-selling author whose story would be told around the world. He never would have dreamed a cat would propel his life in a whole new direction. It all gives testimony to the amazing power of the human-cat connection. While Bob has died, his story will live on.

What is your favorite cat story? Have cats helped save you from some of the many demons that can impact our lives? Please share your story and sign up for our email list so you can continue to follow stories like A Street Cat Named Bob.