Home Cat News Will I meet my cats on the Rainbow Bridge? 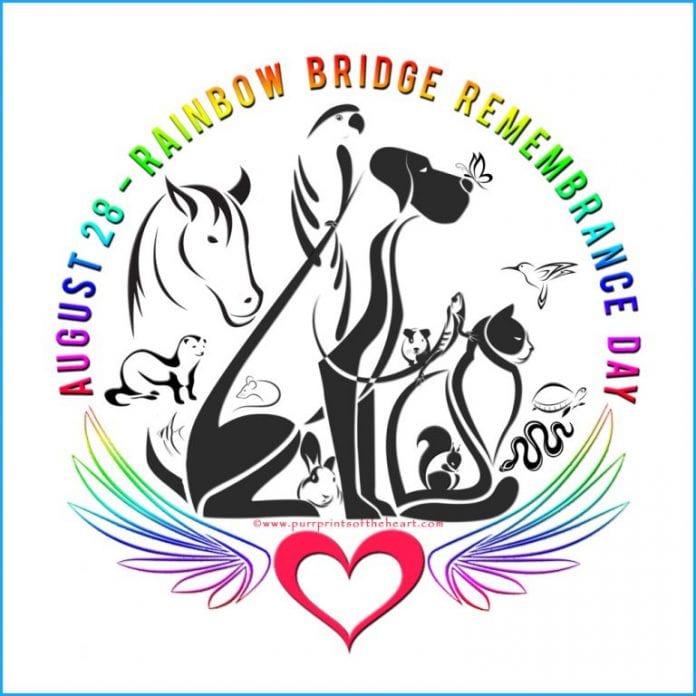 Will I meet my cats on the Rainbow Bridge and be reunited with my beloved furry felines in the afterlife?

At Paws, we like to think so, though nothing is for certain.

Aug. 28 marks Rainbow Bridge Remembrance Day, a time to reflect on all the cats we’ve lost. Last August, I never remotely I would not be spending this summer without my beloved Siamese Cat, Linus. I never dreamed he would not be sitting beside me while I am writing about two cats that passed over the Bridge in late 2017 and 2018.

What is The Rainbow Bridge?

When our beloved pets die and pass on to another world, it is said they pass over The Rainbow Bridge, and wait there in peace while they wait for their beloved owners to join them. And Paws wonders will I meet my cats on the Rainbow Bridge?

Paws had never heard of The Rainbow Bridge until my first cat was euthanized some 13 years ago. My beloved Smokey Blue had become so thin and weak. Her thyroid and kidneys were in poor shape. She was almost 18, and had been in my life since she was six-months-old. She was indeed a love, a true snuggle bug, or should I say snuggle cat.  When she went to sleep, she just looked at her human with loving eyes, saying thank you.

A few days later, the vet’s office sent a sympathy card with the Rainbow Bridge. Paws wondered where did it all come from and what does it mean?

When a pet dies, it goes to the meadow, having been restored to perfect health and free of any injuries. The pet runs and plays all day with the others.

There is fresh food and water, and the sun is always shining. While the pet is at peace and happy, they miss their owner who had to be left behind on Earth.

When their owner dies, they come across the Rainbow Bridge. The pet stops what they are doing, sniffs at the air, and looks into the distance where they see their owner.

They run as fast as they can until they are in their owner’s arms, licking their face in joy while their owner looks into the eyes of their pet who was absent on Earth, but never absent in their heart.

Then side by side, they cross the Rainbow Bridge together into Heaven, never again to be separated.

It’s comforting to think that the Paws family will once again be reunited. While six of my kitties have departed this earth and are not a part of my everyday life, they will always live on in my heart and mind. Why?

My Pink Collar developed mouth cancer in late 2018. She was in significant pain. She was anything but a snuggle cat. She was happy sitting at my side, purring in her indignant fashion. She was a cat with an attitude. If you crossed her line, she’d swat you with her paw. She loved potato chips, and Paws used them to comfort her during her vet acupuncture visits for arthritis pain. Read more about Pink Collar at:

In late 2017, Mom’s cat, Clyde started getting disoriented. He would yowl in the middle of the night because he couldn’t find me. We were both upstairs, and we shared the bed. Then, he stopped eating, and started losing weight. He was in the beginnings of kidney failure. He was a scaredey cat, and Paws never thought he would last 8 years after his real human went into a nursing home. We became good friends.

Read more about Clyde at:

Linus was the love of my life. He would put a paw on each side of my shoulders, like giving me a hug. He would purr me to sleep at night as he snuggled next to my head. He would follow me around like a dog. He would greet guests at the door, letting them know they were welcome. He loved having his photo taken. He had steel blue eyes and as a Traditional Siamese Cat, he was absolutely handsome. Now, a senior cat, he was healthy. Last fall, I noticed he was drinking more and more water. He was diagnosed with diabetes. Once I started administering insulin, it was like a light went out. His eyes dimmed. He stopped eating. Four months later, it hurt to move. On April 10, Vet at Your Door came to the house after a horrendous snowstorm, and we said our good-byes.

For more about Linus, check out:

I still mourn for him. In his memory, Paws is writing a graphite novel (kind of an adult comic book) featuring Linus. Who Needs Men, I’ve Got Cats is now in the design phase, and we hope pre-orders can be accepted in the near future. It is written in memory of Linus and his sibling, Tubby (who succumbed to FIP) at only two years of age. Life with these two cats triggered the idea. When Linus passed, it was time to eulogize him and make this book happen. Paws has tried to work with novice artists in the past, but it all fizzled. The stars aligned on his passing, and within a month, I was negotiating a contract with an artist, one who is helping guide me through the publishing process.

Read more about Tubby at:

Needless to say, The Rainbow Bridge is very helpful, as I do believe Linus’ spirit lives on, a part of it within me.

Why The Rainbow Bridge Concept is helpful?

Key Points About the Rainbow Bridge

More info on will I meet my cats on the Rainbow Bridge?

The newsgroup rec.pets.dogs, posted about Rainbow Bridge on the Internet on Jan. 7, 1993, quoting the poem from a 1992 (or earlier) issue of ‘Mid-Atlantic Great Dane Rescue League Newsletter’, quoting it from the Akita Rescue Society of America. Other posts from 1993 suggest it was already well established and being circulated on the Internet at that time, enough for the quotation of even a single line to be expected to be recognized by other newsgroup readers.

Don’t miss out on the latest Paws News for Cat Lovers. Sign up for our email list and get a free copy of our Comprehensive Guide to Keeping Kitty from Destroying your Sofa.