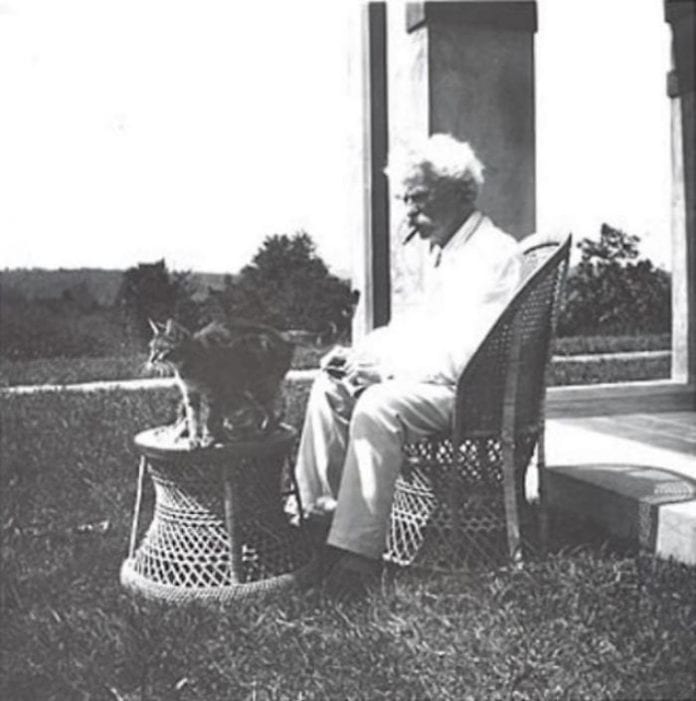 Cat lovers must visit The Mark Twain House & Museum, in Hartford, Conn., because he is most likely the most cat-crazy writer ever.

While the museum does not have any permanent cat exhibits, you may find a temporary exhibit devoted to cats, or some stray, feral cats roaming the premises. One thing is for sure, you will walk away with a better understanding of this well-known author, and perhaps gain an insight into why he loved cats so much.

Why do we say Mark Twain may have been the American writer most crazy about cats? and why do we say cat lovers must visit the Mark Twain House & Museum?

Living History Tours are more expansive than the regular house tour. Here, you will see the Mark Twain House from an entirely different perspective when you join a costumed member of the family or staff for a behind-the-scenes look at life with Samuel Clemens. Each tour is one hour and 15 minutes long and includes opportunities not available on a regular house tour. Reservations are highly recommended.

This is not to be confused with the The Mark Twain Boyhood Home & Museum Museum, 120 N Main St, Hannibal, MO. This houses the original home of the author, along with remnants of the town from his era, are on display.

From his days of growing up in Hannibal, Missouri, to his last years in Connecticut, Mark Twain (Samuel Clemens) spent much of his life surrounded by cats.

His love of cats was something he carried with him from his childhood.

In his earliest recollections, he recalls his mother taking in and caring for strays.
It should be no surprise to find they worked their way into some of his most famous, best-known books including:

Mark Twain had up to 19 cats at a time

Twain owned up to 19 cats at one time, all of whom he loved and respected far more than people. His cats all bore fantastical titles, among them:

At Paws, we were intrigued by the possibility of finding a host of cat places to see around the world. We are writing a whole section on cat tourism, and you may want to check out some of our posts about cat tourism and events.

Throughout his life, when Twain traveled he would rent cats to take the place of his left-behind companions.

Since he couldn’t travel with the cats, he’d rent them and then leave behind money to help cover their care during all nine of their lives.

The most famous cat-renting episode occurred in Dublin, NH, in 1906.

Twain biographer Albert Bigelow Paine witnessed him renting three kittens for the summer. One he named Sackcloth. The other two were identical and went under the joint name of Ashes.

Another story about his love of cats goes like this.

Once, as he was about to enter the screen door that led into the hall, two kittens ran up in front of him and stood waiting. With grave politeness he opened the door, made a low bow, and stepped back and is quoted as saying, ‘Walk in, gentlemen. I always give precedence to royalty.’

Perhaps, Bambino was his favorite cat. And there’s a reason behind that.

His world fell apart in 1904 when his wife, Livy died. He became depressed and barricaded himself in his New York apartment.

His daughter, Clara, also suffered from the stress of her mother’s illness and death. She went to a sanatorium for a year to recover her health.

Although animals were not allowed there, Clara slipped a black kitten into her room. She named the cat Bambino, and he became a great comfort in a very lonely place. Clara wrote about that time in her book, ‘My Father, Mark Twain’:

The cat helped Twain through a deep depression, and when he went missing in New York City, the author offered a $5 reward for anyone who could return Bambino to his home at 21 5th Avenue in New York City.

An advertisement in the New York American read, ‘Have you seen a distinguished-looking black cat that looks as if it might be lost? If you have, take it to Mark Twain, for it may be his.

Twain described the cat as: ‘Large and intensely black; thick, velvety fur; has a faint fringe of white hair across his chest; not easy to find in ordinary light.’

Cat Lovers will learn why Mark Twain loved cats so much

Mark Twain’s love of cats lives on at the museum and through more recent writings. A search on the Internet will find some of Mark Twain’’s quotes about cats:

And In this lighthearted book, ‘Mark Twain for Cat Lovers’, Twain scholar Mark Dawidziak explores the writer’s lifelong devotion to cats through stories, excerpts, quotes, photos, and illustrations, illuminating a little-known side of this famous writer’s life that will appeal to Twain enthusiasts and cat lovers alike.

About the Mark Twain House & Museum

Admission to the Mark Twain House is by guided tour only. Expert guides will life in the Clemens household between 1874 and 1891, the place where they raised their three daughters with the able assistance of various servants including a butler, coachman, maid, cook, gardener, and others. Learn all about the family, friends, servants, and even the pets when you visit.

Bring your curiosity and questions to our knowledgeable guides for a peek back in time to the Gilded Age, Mark Twain’s work, and his personal life.

Each tour is one hour and 15 minutes long and includes opportunities not available on a regular house tour. These tours are currently offered on weekends only.

Sam Clemens watched a young United States evolve from a nation torn apart by internal conflicts to one of international power. He experienced America’s vast growth and change – from westward expansion to industrialization‚ the end of slavery‚ advancements in technology‚ big government and foreign wars. As a writer, he often wrote about the many changes that were happening

Twain Starts a Family and Moves to Hartford

Twain Writes his Most Famous Books While Living in Hartford

Paws was curious as to how one of the highest paid authors of the 19th century could become so broke he had to sell his mansion. And while this does not apply directly to this post, we wanted to share.

He made very poor investment choices, including his publishing company, which was a bust. He lost money on an engraving process, on a magnetic telegraph, on a steam pulley, on the Fredonia Watch Company, and on railroad stocks.

Another bad decision, he turned down a chance to buy into Bell Telephone even though he had one of the nation’s first residential phones.

By the 1890s, Mark Twain was losing money faster than he was reaping the benefits ofhis bestselling books. The stage adaptation of The Gilded Age ran for years; he even invented and patented a very popular scrapbook.

On the advice of Henry H. Rogers of Standard Oil, Twain shifted all his assets to his wife in March 1894, a month before he filed for assignment (bankruptcy). He owed $80,000 (today $2.4 million) to authors, bookbinders and a bank.

While Twain had many financial misadventures and was sinking in debt at points in his life, he left a large estate when he died at age 74. In fact, some have valued it at close to $475,000 — about $15 million today.

How’d he make such a fortune?

In I895, he rented out his mansion in Hartford, Conn., and embarked on a round-the-world tour, a combination of stand-up comedy and celebrity victory lap to make back the money. He was the first American author to travel the world doing this. This plus his writing helped him weather the storm of even more really bad investments.

This is one of the many cat-themed vacations in the United States that cat lovers are bound to enjoy. To keep abreast of more destinations ideas for cat-obsessed people, sign up for our email list below. Not only will you get the latest in cat tourism, but you will also get a FREE Guide to Stop Kitty from Destroying Your Sofa.