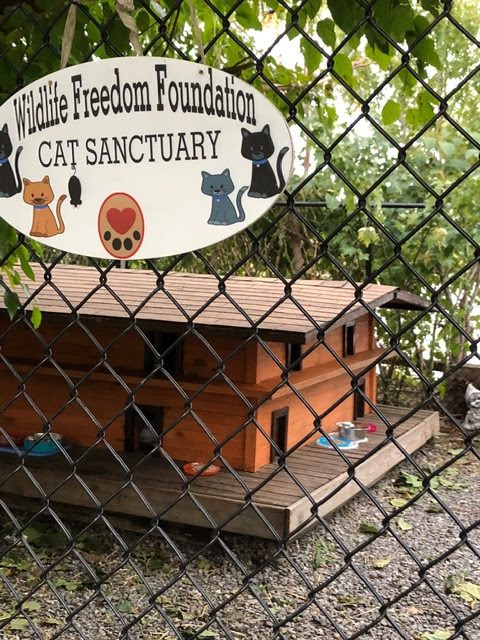 NYC’s Roosevelt Island Cat Sanctuary is ideal for the cat-obsessed, a great place to get your cat fix while visiting the Big Apple.

While one would not expect to be able to visit so many cats in bustling Manhatten, Roosevelt Island is an exception – for the moment that is.

However, they are not out fending for themselves on New York City’s streets.

Currently, the Wildlife Freedom Foundation operates a small shelter on the southern end of the island. On any given day, you may see a few of the island’s felines lazing around their little fenced-in sanctuary, well-fed and totally content.

Roosevelt Island Cat Sanctuary, a must visit in NYC

You can find the cats of Roosevelt Island stalking through the underbrush of the abandoned smallpox hospital, lounging in the community gardens, and slinking through the gaps in construction fencing throughout the island.

The cats nap, play, explore, and live in the island’s four cat colonies.

We are a participant in the Amazon Services LLC Associates Program, an affiliate advertising program designed to provide a means for us to earn fees by linking to Amazon.com and affiliated sites. We are also a participant in other affiliate link programs and the links below are affiliate links, meaning, at no additional cost to you, I will earn a commission if you click through and make a purchase.

The most famous of these colonies settled at the abandoned 1854 Renwick Smallpox Hospital, where visitors can spot four-legged friends lounging on the lawn and wandering through the structure’s ruins.

Currently, the cats are the only ones permitted to enter the grounds.

Caretakers provide the residents with fresh food and water but are not allowed to intrude upon the animals’ home. Concerned cat lovers will just have to trust that the colony is in good hands, and watch the felines from the perimeter.

Feral cats have been living on Roosevelt Island for years. Since the 1970s, residents, and visitors have given them food and water.

Inspired by the death of a beloved local cat by the name of Princess Yin Yang in 2004, a group was formed to trap and neuter strays, and create an adoption program.

That group, named Island cats set out to protect the island’s abandoned cat population. They had a mission: finding forever homes for the approximately 70 feral cats living on the island.

Back in the 1800s, a wave of smallpox swept across New York City and drastic action had to be taken to ensure the disease couldn’t spread.

Built specifically on an island for this purpose, the Renwick Smallpox Hospital treated around 7,000 patients a year.

Eventually, however, Roosevelt Island became more popular and the original purpose of the location became moot, forcing the facility to relocate to North Brother Island.

Renwick was briefly made into a nurses’ dormitory before being abandoned by the city in the 1950s, allowing for the cats to move in.

The Roosevelt Island Cat Sanctuary is easy to find just north of the smallpox hospital on the path that runs along the east shore of the island. There is a second shelter south of and across the street from the Octagon.

How to get there: By tram or by boat

The Roosevelt Cat Sanctuary is a tourist attraction

The Wildlife Freedom Foundation is a non-profit 501c(3) organization specializing in the rescue and placement of pets, wildlife rehabilitation of injured birds and mammals, and advocating to protect, preserve wildlife in New York City.

They operate three Cat Sanctuaries in NYC, all on Roosevelt Island. The largest and most visited is located at 1 Southpoint Park and it has become a tourist attraction and has been rated by TheCultureTrip a ‘Must Visit’ in NYC.

The cat sanctuary houses 20 wonderful, now happy, stray cats. Although, they all have past history of neglect or animal abuse.

Compassionate volunteers care for them daily. Their cats are all spayed/neutered, vaccinated, friendly, and love to meet and greet residents and visitors.

Laws about feral cats differ state to stay. In New York, stray/feral cats are not considered wildlife. All cats, whether domesticated or feral, are considered companion animals under Section 350 of New York’s Agriculture and Markets Law and are protected by the animal cruelty provisions set out in Sections 353 and 353-a.

While they are protected under the law, all, all may not be well for the Roosevelt Island cats.

All is not well with the Roosevelt Island cats

Despite an agreement to relocate to a new home on the island earlier in 2021, it appears the Island officials want to move ahead with reconstruction on the island without first making sure the cats have a new home.

According to the Roosevelt Island Cat Island website, there had been in friendly talks about what was needed for the cats’ new home that RIOC had committed to build. We agreed on the site (at the southern end of the park North of Smallpox and between the East and West entrance to Four Freedoms Park.) Now, there is a question as to whether they will honor that agreement.

Before you go to visit the cats, contact to be sure where to visit.

This isn’t the only controversy to surround the Rosevelt Island Cats. According to an article in the New York Post, the state entity that governs Roosevelt Island is demanding a group of beloved local cat sanctuaries begin paying rent for the first time ever or be evicted.

Rossana Ceruzzi, head of the nonprofit Wildlife Freedom Foundation, told The Post she was stunned when the Roosevelt Island Operating Corporation recently sent her a lease ordering her group to cough up $400 a month for the space the WFF uses in the isle’s Southpoint Park area for its cat sanctuaries and wildlife rehabilitation center.

‘It came out of the blue,’’ Ceruzzi said of RIOC’s “shameless and outrageous’’ demand after 10 years of not requiring the group to pay rent.

“These are community cats. The WFF has been relentlessly working on the island to rescue, remove, relocate, control, etc., abandoned pets and wildlife at no cost to RIOC for innumerable years,’’ she said.

The lease came “with a threat spelled out: RIOC will shut down the cat sanctuaries and dismantle them if I do not sign it as is,” said Ceruzzi, whose organization is a state and federally licensed Wildlife Animal Rehabilitator and admired protector of cats and other animals and birds on the island.

Paws did not find the resolution to this; however, it does seem the Roosevelt Island Cats are amidst a crossroad of the desire to sure of the sea walls and develop the island for more humans to visit.

Our latest found the cat sanctuary is still endangered, mired in what appears to be a political, territorial controversy. We ask why, as there is no doubt the Roosevelt Island Cat Sanctuary is a real draw for the island.

A few facts about Roosevelt Island

All of this is dramtically different from the island’s bleak roots.

Before the island was developed, it was home to a prison, an insane asylum, and this smallpox hospital, which stood for 100 years before it was abandoned in the 1950s. It’s now on the National Register of Historic Places.

But the real star of the island is President Franklin D. Roosevelt Four Freedoms Park on the southern tip.

If you are enjoying this post, check out some additional places you can get a big dose of cat on vacation.

Visit the Roosevelt Island Cat Sanctuary to sign their petition and show your support of maintaining this tourist attraction in NYC. To keep abreast of the latest in cat news and cat tourism, sign up for our email list below. As a bonus, you will get a FREE Comprehensive Guide to Stop Your Cat From Destroying Your Sofa.

Sept. 16, 2021 Update: After pressure was brought to bear on RIOC, they backed off their demands and executed a contract that does not include any rent. In this case, the pen was mightier than the sword and the WFF animal sanctuary is thriving. Thanks for supporting and asking. (Thanks to David Stone for this info)