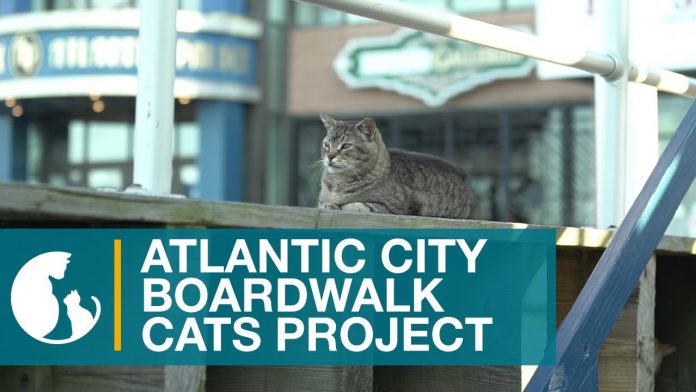 The Legendary Boardwalk Cats live on in Atlantic City, and attract visitors and cat lovers from all over the country, and beyond, all hoping to meet the famous Boardwalk Cats.

While visitors to this New Jersey City may have come for the gambling or the ocean, they get a bonus. They get a chance to see the Legendary Boardwalk Cats. This group of feral cats has become beloved members of the Atlantic City community and enchanted tourists from around the world.

New Jersey’s Atlantic City Boardwalk is over five miles long, but the cats only occupy a portion of it. The boardwalk is the longest in the United States. Atlantic City is known for its casinos, boardwalk, and beaches. It is also the inspiration for the board game Monopoly, especially the street names.

The Legendary Boardwalk Cat project is one of the longest and most successful Trap Neuter and Return (TNR) projects in the country, which makes it a must-visit Cat Tourism spot for the cat-obsessed, and those not so cat-obsessed.

Legendary Boardwalk Cats in their teens

But don’t count on getting a big dose of kitten on the boardwalk. TNR is designed to stop the prolific cat overpopulation that can occur if cats are not spayed/neutered.

Many of the legendary boardwalk cats are in their teens, living proof that cats can live long and healthy lives outdoors. Some people believe indoor cats, on average, live ten years longer than outdoor cats, but the boardwalk cats are proving to be an exception to that belief. If you are a cat owner and lover you may probably be interested on these Cat Nutrition tips this website has to offer to improve you cats wellbeing.

You might see the cats lounging underneath the docks or basking in the sun on a two-mile stretch of the boardwalk. They even make regular visits to local businesses.

According to Alley Cat Allies, The Boardwalk Cats Project is a city-endorsed Trap-Neuter-Return (TNR) program that brings together community leaders, advocates, and the public to protect and improve the lives of the cats who live along the Atlantic City Boardwalk in New Jersey.

The Boardwalk Cats Project is an innovation that the lives of many cats.

How the Boardwalk Cats became a legend

Each cat has been humanely trapped, spayed or neutered, and vaccinated. In the first two years of the project, more than one-third of the cats—who were kittens and socialized adult cats—were adopted.

Over 20 years later, volunteers for Alley Cat Allies monitor the cats in each colony every day, ensuring they have food, water, shelter, and veterinary care when needed.

The cats continue to live at the two-mile stretch of boardwalk, which is their home. They each sport an eartip.

An eartip is used worldwide in TNR programs signifies that a cat has been spayed or neutered and vaccinated. It is commonly used to identify feral cats that are spay/neutered.

Founded in 1990, today Alley Cat Allies has grown into a powerful force with more than 650,000 supporters.

The organization has helped and inspired countless individuals, communities, and organizations to save and improve the lives of millions of cats worldwide.

Headquartered in Bethesda, Md., Alley Cat Allies is the leading advocacy organization dedicated to protecting and improving all cats’ lives. To do this, they use innovative, cutting-edge programs.

For those of you who don’t know what feral cats are, they are not socialized to people. While they are socialized with their colony members and bonded to each other, they do not have that same relationship with people.

For many years, kind caregivers came from all over the Atlantic City region to the Boardwalk every day to care for the resident community cats and enjoy their company.

They formed a network and set out to take the cats and kittens to veterinarians to be spayed and neutered.

They even obtained a foundation grant to help with the veterinary costs.

However, veterinary services for community cats, including spay and neuter, were hard to come by in those days. The caregivers were seeking help and finding no assistance.

According to the Alley Cat Allies website, they soon learned what would happen if the authorities became involved.

In 2000, a single call to animal control lead to cats being trapped and more scheduled to be. A mother cat was removed and killed and her small newborns were left to perish.

However, the caregivers needed immediate help defending the Boardwalk felines. They called Alley Cat Allies who did not hesitate to take action.

Their first objective was to mobilize the community to end the killing.

After a successful meeting with the city’s health department director, Ron Cash, they formed the Cat Action Team (C.A.T.). The team included the director and his staff, the Humane Society of Atlantic County, the caregivers, and advocates.

Alley Cat Allies and all cat rescuers know firsthand that grassroots organizing is key to ending the bad policy. That bad policy gets rid of the cats.

Instead, they try to protect the cats. That’s just what they did in Atlantic City.

This ultimately led to a new policy that banned animal control from rounding up and impounding the cats.

They worked with the Department of Public Works, who helped develop the high standards they wanted for the cats.

They educated the public about the benefits of TNR and the facts about community cats, who live and thrive outdoors.

The effort became formally known as the Boardwalk Cats Project, and its impact has been and continues to be profound.

No kittens have been born on the Atlantic City Boardwalk in years, and the remaining cats are living long lives where they belong: in their outdoor homes.

The Boardwalk Project was a True Community Effort

The Boardwalk Cats Project is more than a TNR program. It represents a strong partnership with the community.

In addition to helping the cats, Alley Cat Allies helped Atlantic City with its recovery after Hurricane Sandy.

Through workshops and informative Boardwalk signs, they continue to provide humane education about the Boardwalk Cats.

According to Alley Cat Allies, The Boardwalk Cats Project is ongoing proof that TNR is a humane and effective approach that benefits outdoor cat populations and the larger community.

It is a model and inspiration for cities and towns everywhere, and they say it is all possible thanks to the generosity of our supporters.

The next time someone questions whether Trap-Neuter-Return is the only humane and effective approach to community cats, tell them about the Boardwalk Cats Project.

Over the past couple of decades, the project has benefitted the community and allowed the Boardwalk Cats to live full, healthy lives in their outdoor homes.

Without the Boardwalk Cats Project, many of these beloved cats would have been caught, brought to animal shelters, and killed.

Alley Cat Allies core belief is that every cat deserves the best possible chance to have a long, full life. TNR provides that opportunity, and the Boardwalk Cats Project illustrates why every community should have its own TNR program.

Learn more about the Boardwalk Cats Project’s success in a case study.

Read more about the Boardwalk Project in this article by PetHelpful.com.

If you enjoyed this article, check out some of our other posts about cat tourism and places ideal for the cat-obsessed looking to get their big dose of cat while on vacation.

Are you cat-obsessed? Do you have some vacation spots you go to where you get a big dose of cat? Paws would love for your to share your photos and stories through our comments section. To keep abreast of the latest cat news on tourism and events, sign up for our email list below, and get Your FREE Comprehensive Guide to Stop Your Cat from Destroying Your Sofa.