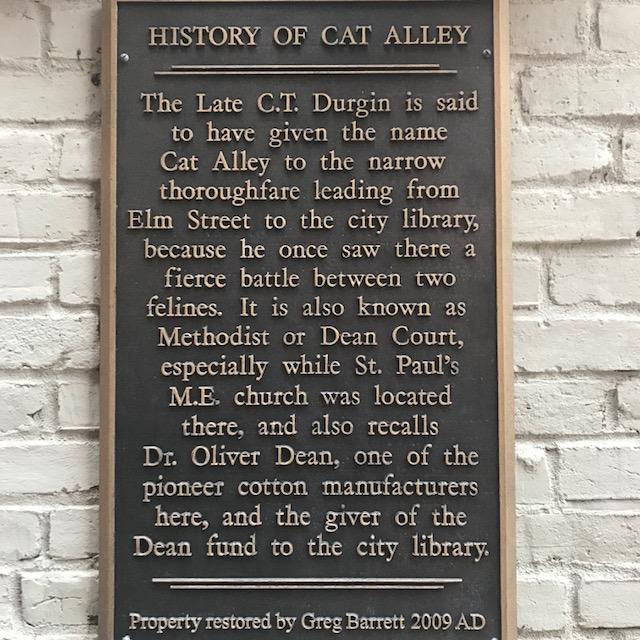 Visit Cat Alley, to see the cat art. This cat-themed spot is a mecca of feline art, full of murals painted on this cat-themed alley in what used to be Manchester, NH’s Dean Court.

This small alley, located off Elm Street, has been transformed into an outside cat-centric art gallery, now a haven for cat-obsessed tourists and locals alike.

Formally known as ‘Dean Court,’ the slight side street leading to the public library has become a needle in a haystack. Yes, there’s trash and you might want to reserve your visit to daylight hours (but after all, that’s the best time to see the cat murals).

You will be delighted by the cat murals lining the alley walls when visiting Cat Alley. There are over 30, some painted by local artists – others by local kids.

The cats aren’t just any old cats. They are displayed in various poses working in a number of different professions including copycat editors at the Manchester Union Leader, cat burglars doing their thievery in the middle of the night, and even cat barbers cutting hair.

One would not expect to find a cat alley in New Hampshire. These are usually found in places like the Neko no Hosomichi or Cat Alley in Onomichi, a hidden treasure of Japan. We also found there’s Cat Alley in Denver, CO, much on the same bent.

A little bit of history about Cat Alley

Interestingly enough, cat alley has been involved with cats for a long time. The alleyway got its name from a pioneering cotton mill manufacturer.

It gained its more well-known nickname from someone named C.T. Durgin. While our research did not find out exactly who he was, a bronze plaque at the site says that the man named the alley after seeing a battle between a pair of stray cats on the small street.

For most of its life, Cat Alley was just an ordinary street that was known for being an alley.

Cat Alley did not become the street art gallery it is today until a local realtor took a shine to the little alley, and began a campaign to revitalize the street.

After raising some money and working with local businesses, he was able to get permission to decorate the alley in cats. He then teamed up with a local artist who worked with at-risk street artists and had a number of wall murals painted across the brick, creating an urban art gallery. He even got the Cat Alley historical plaque installed.

The project really took off in 2011. At that time, there were only three murals. The rest of the wall was empty Then, Anthony Williams, an artist, and muralist in Manchester stepped up to the plate. He had produced work for St. Joe’s school of nursing and the Loudon library. He also became the point-person in organizing artists to paint murals in Cat Alley.

Now there are over 30 murals at Cat Alley. You’ll also find cat bicycle racks, as an added bonus.

Artists included an 11-year old girl, a homeless woman who came daily with a rolled up blanket full of brushes and paints, and more traditional artists.

Today, the alley sports dozens and dozens of murals dedicated to cats. Cats, who are in some way, paying homage to the history of Manchester.

Should you find visiting  Manchester, the Granite State, or New England with some time to kill and a desire to get your cat fix on vacation, head for Cat Alley.

Check out these cat tourism spots

Check out some of our posts on cat tourism spots in the Northeastern US and beyond.

Know Before You Go

Are you cat-obsessed? Do you have some vacation spots you go to where you get a big dose of cat? Paws would love for your to share your photos and stories through our comments section. To keep abreast of the latest cat news on tourism and events, sign up for our email list below, and get Your FREE Comprehensive Guide to Stop Your Cat from Destroying Your Sofa.